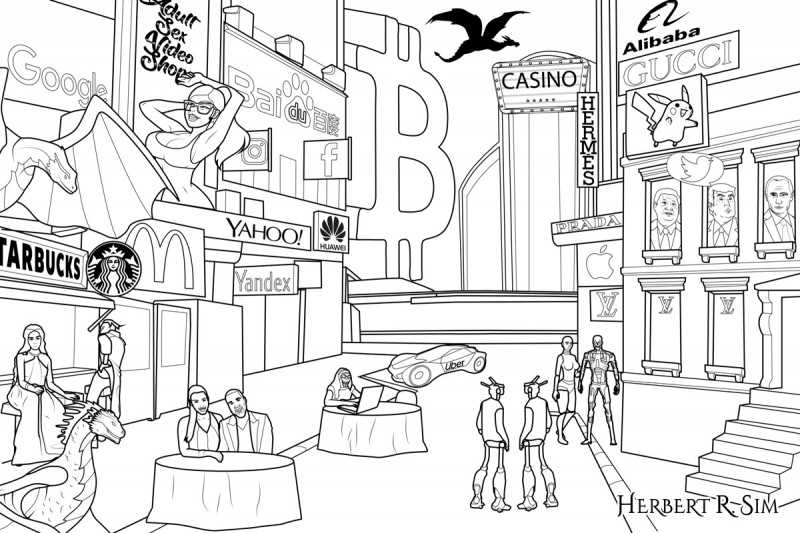 My sketch entitled the “Decentralised World Of Internet” featuring all the trending personas and brands across the internet world.

In the last few decades, the Internet has connected the world and broadened horizons in a way never before possible, transforming the way we work, play and live. At the same time, the Internet as we know it has changed rapidly. While in its early days the information superhighway was a free and unfiltered space for people to share radical ideas, it has now become increasingly controlled, censored and commoditized by major actors from the industry and government.

That is not to say that we are not experiencing the tremendous benefits the Internet has to offer vis-à-vis access to information, building social connections and making a living. Progress, though, has come with trade-offs such an increasingly centralised architecture that looks to consolidate access, information and power in the hands of a few actors.

As a case in point, governments in the US and Australia are demanding “back door access” to encrypted devices and software. The reason being certain devices and services pose a security threat by providing a secure, third-party-inaccessible zone where criminal activity can proliferate. However, this also erodes the right to free speech and privacy, which could mean a difference between life and death in the case of journalists, researchers, and individuals doing work related to political unrest or living under authoritarian governments.

With the current trajectory of centralisation looking more untenable by the day, decentralization offers a way forward. And the cryptocurrency (e.g. Bitcoin) and blockchain era that we have entered can make the decentralisation vision a reality. While the initial applications of blockchain were for cryptocurrency transactions, the same technology is now finding use in the development of the decentralised Internet, or DWeb, for applications related to recording the movement of data, registering unique user names and data storage.

The decentralised internet could be a chance to take control of our data back from big tech firms and governments. It refers to a loose grouping of services and protocols whose aim is to redistribute online power back to users, and provide the possibility for collectivized ownership and censorship resistance.

Though still in the early developmental stages, the ideas being developed could change the way we experience the internet in a way similar to the evolution from Internet 1.0 to 2.0. A growing contingent of developers are certain that decentralization is the future of the Internet. 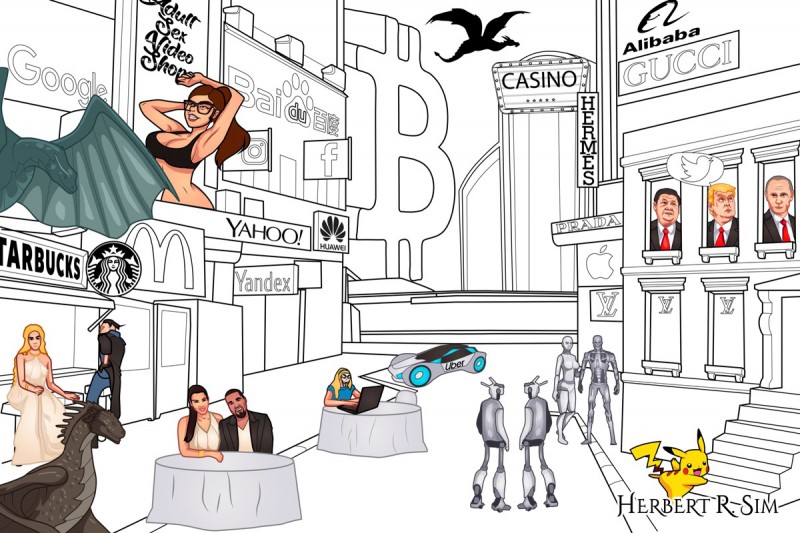 Proponents of DWeb want a better system where the entire planet’s population can communicate without having to rely on big companies that amass data for profit, and make it easier for governments to censor expression and conduct surveillance. In a decentralised Internet, users have control over their data, and interact directly with others in their network.

According to Matt Zumwalt, the programme manager at Protocol Labs, which builds systems and tools for the DWeb, there are two big differences in how the decentralised Internet works compared to the world wide web:

First, there is peer-to-peer (P2P) connectivity where a computer not only requests services but is also able to provide them.

Second, the way in which information is stored and retrieved differs. Currently, ‘http’ and ‘https’ links are used to identify information on the web. Those links point to content by its location, telling computers to find and retrieve information from those locations using the http protocol. In contrast, DWeb protocols use links that identify information based on its content – what it is instead of where it is. A content-centric approach enables websites and files to be stored and passed around in many ways from computer to computer, instead of relying on a single server as the one conduit for exchanging information.

Numerous apps and programs are already being developed based on the decentralised model. Many are experimental, though some are further along.

There is also an independent experimental browser for exploring the P2P web called Beaker Browser. Content can be published even quicker than one would be able to on a Medium page or Tumblr, but with full control over it. Furthermore, the website is distributed directly to other users. 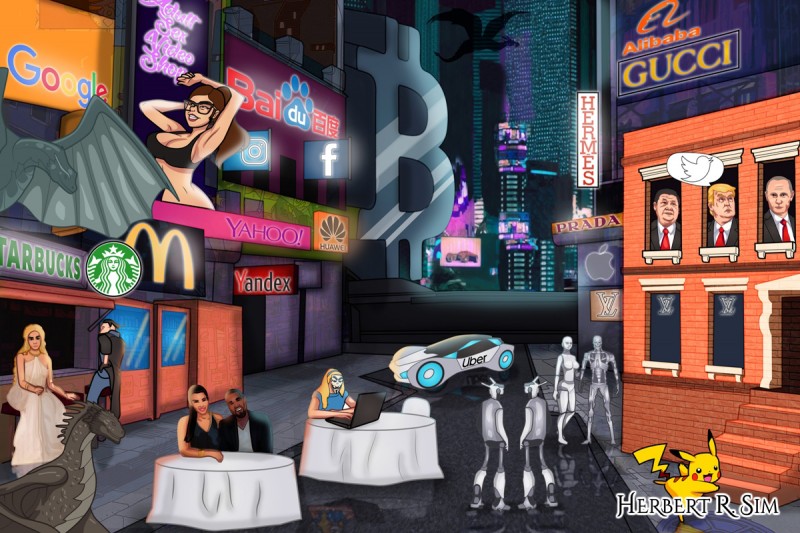 As I previously discussed, leading cloud storage service providers tend to be highly centralized. These cloud storage providers control all the data that runs through their clouds, which raises questions regarding data protection, data privacy, and the ownership of data. The cloud storage market is growing at an exponential rate, with market revenue in 2016 being more than US$4 billion.

Decentralised cloud storage networks are emerging as a welcome alternative in this vast marketplace. The peer to peer network that blockchain technology creates can be used for running algorithms along with storing data. As I also previously explained, in a decentralised cloud storage network, data is encrypted and distributed across a decentralized network instead of being stored on a single company’s servers.

Blockchain-based cloud storage solutions take a user’s data and break it up into tiny chunks of data, which are then encrypted to add an additional layer of security. This encrypted data is then distributed throughout the network via blockchain features such as transaction ledgers, cryptographic hash functions, and public/private key encryption.

Decentralised cloud networks have certain advantages over centralised ones. Because the different bits of encrypted data are not stored on the same storage device or location and are split randomly throughout the network, even if one bad actor was able to decrypt a piece of data, they would not have access to the entire file. It would also not be possible to identify who the data belongs to, thus ensuring that the true user remains anonymous.

The decentralised Internet and cloud networks are technologies through which information of any kind can be exchanged and stored. In essence, they empower the means for freedom of expression such as free speech.

Many governments and corporations today use censorship software to monitor the online activity of people and prohibit access to content deemed undesirable. According to Freedom House, Internet freedom in 2017 dropped for the seventh year in a row, with as many as two-thirds of all web users facing state censorship. Blockchain-powered decentralised technologies enable people to overcome such restrictions, communicate securely, and hold authoritarian governments and unethical corporations accountable.

Because a blockchain record is kept universally and is immutable, it cannot be altered by any one malicious third party, regardless of their power or influence. Blockchain allows individuals with grievances to air their views on a protected platform without fear of censure or censorship.

For example, in China, after activists began publishing #MeToo blog posts, the government reacted by censoring them. In response, the ingenious activists turned to the Ethereum blockchain. By sending themselves extremely small denominations of Ether and attaching written memos to their transactions, they were able to permanently imprint their stories on a global ledger. This information is easily viewable with a variety of block explorers – websites that display blockchain transaction information.

In a time when diversity, inclusion and freedom are gaining new and greater importance, fully open- source, secure and decentralised systems of expression – be it financial, linguistic, political, scientific or otherwise – are needed. Or else, we would be left overly-dependent on centralised systems that exercise far too much influence over our lives. 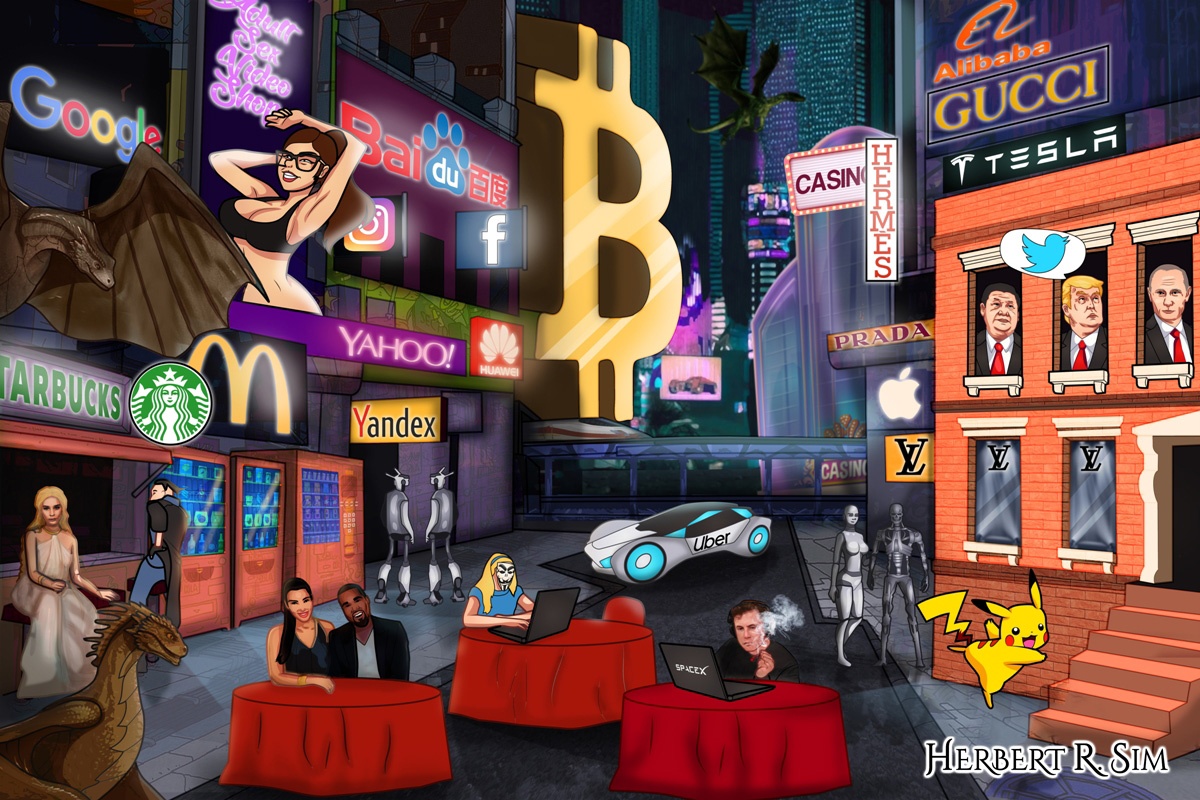 In my final illustration, I added the final touches – Elon Musk smoking on a cigar, on his laptop with brand ‘Space X’; and Tesla logo added. And also subtly in the background, a Casino, something the internet cannot do without.