What are Decentralized Cloud Storage Platforms? 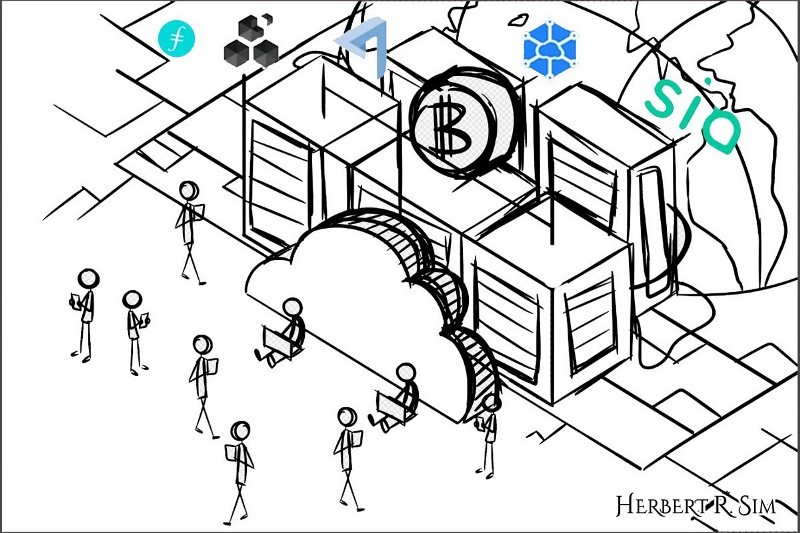 Even the most passionate blockchain enthusiast probably understands by now that blockchain technology isn’t a magic wand to solve every problem. However, the technology still holds great potential in a lot of areas, and cloud storage services are one of the most prominent.

Both consumers and businesses have become heavily dependent on cloud storage providers. As we are storing more and more data on our devices, we want this data to be safely stored, as well as instantly and constantly accessible.

The cloud storage industry is set for another growth spurt, but there are several big opportunities based on the inefficiencies of the current market dynamics.

Decentralized platforms have the potential to give a serious upgrade to the cloud storage industry in terms of security and privacy. But the most interesting aspects are the serious decrease in cost, and the ability for anyone with idle storage capacity to make an income.

In this article, we take a look at the cloud storage industry, how decentralization could disrupt it, and the major players that could start the disruption.

Storing something in “the cloud” may sound rather abstract, but contrary to what the word cloud suggests, cloud storage is actually quite tangible.

Using a cloud storage service means that you are using a cloud computing model that allows you to store and instantly access your data on remote servers through the internet. These servers that make up the cloud are still just hardware sitting in some server warehouse, sometimes in multiple locations, which are accessed via the internet.

The storage clouds are typically managed, maintained, and operated by cloud storage service providers. These providers have created a virtual storage architecture, which is easy to use for end users, and through which they can store far more data than their own hardware allows for without having to make inefficient storage hardware investments.

On a retail level, this means that people can store much more data without having to carry around a physical hard drive, while on an organizational level, cloud storage services enable companies to store and access all the data they want without having to invest in their own storage hardware.

This is especially beneficial as the required storage capacity fluctuates a lot from time to time, meaning companies constantly have too much or too little storage capacity.

Click here for an in-depth explanation of how cloud storage works on a technical level.

The cloud storage market is estimated to reach a value of $89 billion by 2022, coming from $31 billion in 2017. The top 5 cloud storage vendors are Microsoft, Amazon, IBM, Salesforce.com, and SAP, with Oracle and Google close after.

According to Forbes, the explorative and experimental phase of the cloud computing industry is over, and the industry’s balance of power is:

Shifting toward those tech providers that can move those business customers past the infrastructure phase and into the high-value realm of AI-driven competitive advantage.

I made sure to add the BITCOIN logo on top of the IBM mainframe, supercomputer, storage servers behind the cloud, to showcase the possibility of Bitcoin eventually becoming the MAIN currency utilised across the world. Other Brand Logos included in the illustration are: Apple, HuaWei, SiaCoin, Filecoin, Storj, Maidsafe, SWARM.

What is Decentralized Cloud Storage?

Even though the cloud storage industry is rapidly maturing, there are still multiple opportunities for improving cloud storage services.

All of the previously mentioned leading cloud storage service providers are highly centralized. These cloud storage providers control all the data that runs through their clouds, raising a lot of questions regarding data protection, data privacy, and the ownership of data.

The centralized cloud storage hosts can monitor, censor, and disclose data to third parties by anti-privacy laws and they can lose, alter, or scramble the data stored by their users. Even though there are laws to ensure these companies won’t abuse their power, the fact that they, or unwanted third parties, could is worrisome.

It makes sense that, for example, Asian and European companies do not want to use American cloud services, because nobody knows who’s watching (e.g. NSA, Pentagon).

Moreover, centralized cloud storage providers are a single point of failure for hacks, which have and will continue to cause major data leakages of users’ private data.

In essence, the decentralized cloud storage networks I’m about to describe all work similarly. Instead of storing data on a single company’s servers, the data is encrypted and distributed across a decentralized network.

This means that no single party except the owner of the data can access the data, making the decentralized approach the most secure cloud storage solution around for now.

These networks run on open-source software, meaning their dynamics are visible to anyone. Moreover, the blockchain maintains a distributed ledger that stores all transactions. Both of these factors result in unmatched transparency.

Decentralized cloud storage networks potentially employ millions of server devices instead of a few hundred or thousand. This means that the availability of storage is generally much higher, and the cost of storing data substantially lower. The latter holds up because decentralized networks allow for fair market prices, as there is continuous competition among the millions of storage providers.

Another valuable efficiency that decentralized cloud storage networks enable over their centralized counterparts is a mass efficiency between the supply and demand for data storage. Individual and organizational data demands continuously fluctuate, resulting in a lot of idle storage capacity on the one hand and not enough storage capacity on the other.

Through decentralized, distributed, and permanently live networks, these inefficiencies can be solved.

SiaCoin is one of the leading decentralized cloud storage platforms and one of the industry’s veterans, going back to 2013 with an official launch in 2015.

The Sia network relies on the underutilized hard drive capacity of globally dispersed computers that have joined their distributed cloud storage network.

Once the Sia protocol has identified the available storage capacity, it transmits this information to the network to create a data storage marketplace. No signups, no servers, no trusted third parties needed.

Sia uses a Proof-of-Storage algorithm and smart contracts for the storage renting process, Proof-of-Work for validating transactions, and produce-mining hardware for mining Siacoins.

The Sia network is already up and running, and at the time of writing the capacity of the Sia network is 3.8 petabytes provided by 481 network members. In total, 230 terabytes have been used through the network.

Moreover, the team states that:

Filecoin uses the InterPlanetary File System (IPFS) protocol, started by Protocol Labs, which is a peer-to-peer protocol based on the Bitcoin blockchain that enables the sharing and storage of online content.

Providers of storage to the Filecoin network are the network’s miners, and they receive Filecoin for hosting files. In order to mine, you need to download Filecoin mining software, and anyone can let their idle storage capacity work for them and earn some Filecoins.

The Filecoin project is still in development with the first protocol implementation still under construction. In order to attract Filecoin miners, providers of storage, the team has recently launched their Early Miner Program.

The Storj cloud platform lets users rent storage from their peers on the network. All network transactions are conducted in Storj’s crypto asset Storj, which is a token launched on the Ethereum blockchain.

Users can be sure that only they can access their files if stored on the Storj network because of the private keys they’ve implemented. At the same time, the Storj platform allows its network participants to rent out their extra hard drive space and bandwidth.

Storj already has a fair number of partners, and has recently released their latest whitepaper, in which they present the architecture of the new Storj cloud storage network.

According to the founder of Storj:

We are currently storing 1,300 TB of data, and have over 15,000 developers signed up for our API. Usage and users are growing at a pretty impressive rate, and we are currently working on some pretty exciting integrations. These integrations will make Storj easier to use, and expand the user-base considerably.

For storing 1GB on the Storj network, you pay $0.015 per month on average, which is far below the current industry standard.

The name of this project is an acronym for “Massive Array of Internet Disks – Secure Access For Everyone,” and the Maidsafe project has been in the making for 12 years under the lead of engineer David Irvine.

The core vision of Maidsafe is to provide as many people as possible with the privacy, security and freedom they are entitled to. That’s a pretty big goal, and the technological dream of the team is just as big, with their aspirations of creating the world’s first fully autonomous decentralized data network, called the SAFE network.

Because SAFE is designed to be both fully autonomous and fully decentralized, the network can’t be blocked, controlled or turned off.

This project seems more directed at a technological libertarian mindset, but the network has ambitious and innovative ideas that might just give it an edge in the battle for the decentralized storage market as a whole.

SWARM is a decentralized P2P storage and sharing service that stores all of its data in nodes, and operates as a native base layer of the Ethereum Web3 stack. The protocol seeks to cache “Ethereum’s public record, in particular to store and distribute dApp code and data as well as blockchain data.”

In order to attack the Swarm network, one would need access to all the nodes at the same time – which would require hundreds of supercomputers.

Swarm operates with an upload and disappear model, which allows users to upload content, which can then view it offline via synchronization. Synchronization is a procedure that allows nodes to continuously pass data and information between one another.

The protocol is still in its Proof of Concept stage and currently operates on the Ethereum TestNet. 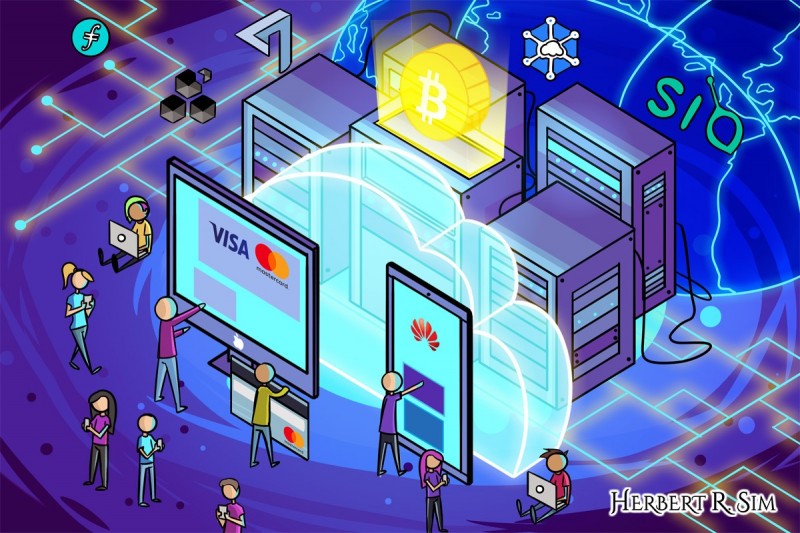 Here above is my final illustration, if you would compare against my above Work-In-Progress, the main difference is adding VISA and MASTERCARD credit card payment solutions, along with Mobile payment solutions, via popular Android mobile phone brand – HuaWei. And of course, BITCOIN takes centrestage atop the mainframe representing Bitcoin Mining.

A future in Distributed Storage Networks?

Given how the cloud storage market is expected to double in value by 2022, there is still room for new participants to step onto the playing field.

Even though tech giants such as Microsoft, Amazon, and IBM are currently in control of the cloud storage industry, the mass cost reduction provided by a decentralized, incentivized cloud storage network could seriously reinvent the market for extra storage capacity.

The upgrades in terms of security and privacy for individual users are awesome features, but as soon as you’ve got a product or service that can save businesses money, you know you’ve struck gold.

Although these systems require several improvements before they can become stable, statistics reveal a growing global demand. Additionally, they are incredibly low-cost, transparent, and more secure than present systems.

However, decentralized cloud storage will not happen overnight, and many roadblocks can be expected before mass adoption.