World’s 10 Most Famous Traders of All Time 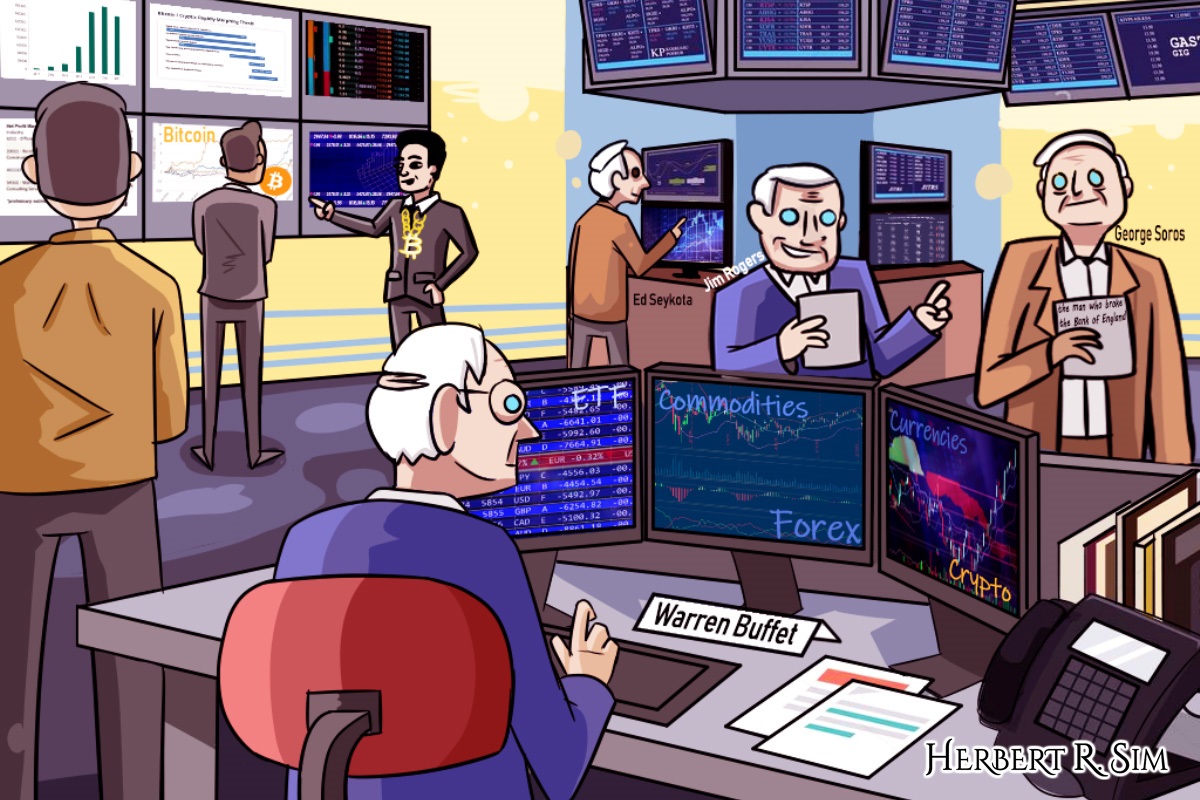 Above, I have illustrated the top traders in the world, all in one stock exchange room itself, featuring Warren Buffett, Ed Seykota, Jim Rogers, George Soros, and in the background – my persona a.k.a. The Bitcoin Man, evangelizing about Bitcoin.

There are several famous former traders who moved onto different careers, such as Jimmy Wales (founder of Wikipedia) and John Key (who served as the 38th Prime Minister of New Zealand). However, this list is made up of traders famous for being traders. The lives of the world’s most famous traders are colored by both triumph and tragedy, with some exploits achieving mythological status within the industry. The list ranked according to legendary traders of history and progresses to those of the present day, accompanied with a quote that inspires me the most from them.

Here is a famous quote from Jesse Livermore:

“Play the market only when all factors are in your favor. No person can play the market all the time and win. There are times when you should be completely out of the market, for emotional as well as economic reasons.”

Hungarian-born (August 12, 1930), George Soros is one of the most successful forex traders of all time. He gained international notoriety when, in September of 1992, he invested $10 billion on a single currency trade when he shorted the British pound. He turned out to be right, and in a single day the trade generated a profit of $1 billion – ultimately, it was reported that his profit on the transaction almost reached $2 billion. As a result, he is famously known as the “the man who broke the Bank of England”. He is also a philanthropist, political activist and author.

Soros went off on his own in 1973, founding the hedge fund company of Soros Fund Management, which eventually evolved into the well-known and respected Quantum Fund. For almost two decades, he ran this aggressive and successful hedge fund, reportedly racking up returns in excess of 30% per year and, on two occasions, posting annual returns of more than 100%.

Here is a famous quote from Mr. Soros:

“Markets are constantly in a state of uncertainty and flux and money is made by discounting the obvious and betting on the unexpected.”

Known as the “Oracle of Omaha,” Warren Buffett (August 30, 1930) is one of the most successful investors of all time. He runs Berkshire Hathaway, which owns more than 60 companies, including insurer Geico, battery maker Duracell and restaurant chain Dairy Queen. He has committed to giving more than 99% of his fortune to charity. So far, he has given nearly $32 billion.

Here is perhaps a lesser-known quote from Warren but one that I like nonetheless:

“Opportunities come infrequently. When it rains gold, put out the bucket, not the thimble”

James Beeland Rogers Jr. (October 19, 1942), is a Singapore based business magnate of American origin. Regarded by the business world as a brilliant investor, Rogers is also an author and financial commentator. He co-founded the global investment partnership, Quantum Fund, along with George Soros, another equally brilliant businessman.

Here’s one of my all-time favorite trading and investing quotes, courtesy of Mr. Rogers:

“I just wait until there is money lying in the corner, and all I have to do is go over there and pick it up. I do nothing in the meantime. Even people who lose money in the market say, “I just lost my money, now I have to do something to make it back.” No, you don’t. You should sit there until you find something.”

Trading as a trend follower, Ed Seykota (August 7, 1946) turned $5,000 into $15,000,000 over a 12-year time period in his model account – an actual client account. In the early 1970s, Seykota was hired as an analyst by a major brokerage firm. He conceived and developed the first commercial computerized trading system for managing clients’ money in the futures markets

Here is quote from Ed Seykota from The Market Wizards by Jack D. Schwager:

“Fundamentals that you read about are typically useless as the market has already discounted the price, and I call them “funny-mentals”. I am primarily a trend trader with touches of hunches based on about twenty years of experience. In order of importance to me are: (1) the long-term trend, (2) the current chart pattern, and (3) picking a good spot to buy or sell. Those are the three primary components of my trading. Way down in a very distant fourth place are my fundamental ideas and, quite likely, on balance, they have cost me money.”

Richard J. Dennis (January, 1949), a commodities speculator once known as the “Prince of the Pit,” was born in Chicago, in January, 1949. In the early 1970s, he borrowed $1,600 and reportedly made $200 million in about ten years. Dennis and his friend William Eckhardt, are most famous for starting the Turtle Traders, which was a group of 21 average people to whom they taught their rules to and proved that anyone, given the right training, could trade successfully.

Here is a good quote from Richard Dennis:

“I’ve certainly done it – that is, made counter-trend initiations. However, as a rule of thumb, I don’t think you should do it.”

Raymond Dalio (August 8, 1949) is an American billionaire investor, hedge fund manager, and philanthropist. Dalio is the founder of investment firm Bridgewater Associates, one of the world’s largest hedge funds. As of January 2018, he is one of the world’s 100 wealthiest people, according to Bloomberg.

Here is a pretty deep quote by Ray Dalio:

“I believe that the biggest problem that humanity faces is an ego sensitivity to finding out whether one is right or wrong and identifying what one’s strengths and weaknesses are.”

In 1988, he was hired by George Soros to replace Victor Niederhoffer at Quantum Fund. He and Soros famously “broke the Bank of England” when they shorted British pound sterling in 1992, reputedly making more than $1 billion in profits. They calculated that the Bank of England did not have enough foreign currency reserves with which to buy enough sterling to prop up the currency and that raising interest rates would be politically unsustainable.

“I’ve learned many things from him [George Soros], but perhaps the most significant is that it’s not whether you’re right or wrong that’s important, but how much money you make when you’re right and how much you lose when you’re wrong.”

Paul Tudor Jones (September 28, 1954) shorting of Black Monday was one of the most famous trades ever. Paul Tudor Jones correctly predicted on his documentary in 1986 based on chart patterns that the market was on the path to a crash of epic proportions. He profited handsomely from the Black Monday crash in the fall of 1987, the largest single-day U.S. stock market decline (by percentage) ever. Jones reportedly tripled his money by shorting futures, making as much as $100 million on that trade as the Dow Jones Industrial Average plunged 22 percent. An amazing trade to walk away from with a fortune when so many others were ruined in the aftermath. He played it to perfection. His funds had great consistent returns for decades.

Here is a favorite quote of mine from Paul Tudor Jones featured in The Market Wizards by Jack D. Schwager:

“That was when I first decided I had to learn discipline and money management. It was a cathartic experience for me, in the sense that I went to the edge, questioned my very ability as a trader, and decided that I was not going to quit. I was determined to come back and fight. I decided that I was going to become very disciplined and businesslike about my trading.”

John Paulson (December 14, 1955) became world-famous in 2007 by shorting the US housing market, as he foresaw the subprime mortgage crisis and bet against mortgage backed securities by investing in credit default swaps. Sometimes referred to as the greatest trade in history, Paulson’s firm made a fortune and he earned over $4 billion personally on this trade alone.

Here is a great quote from John Paulson:

“Many investors make the mistake of buying high and selling low while the exact opposite is the right strategy.”