What is a Cypherpunk? 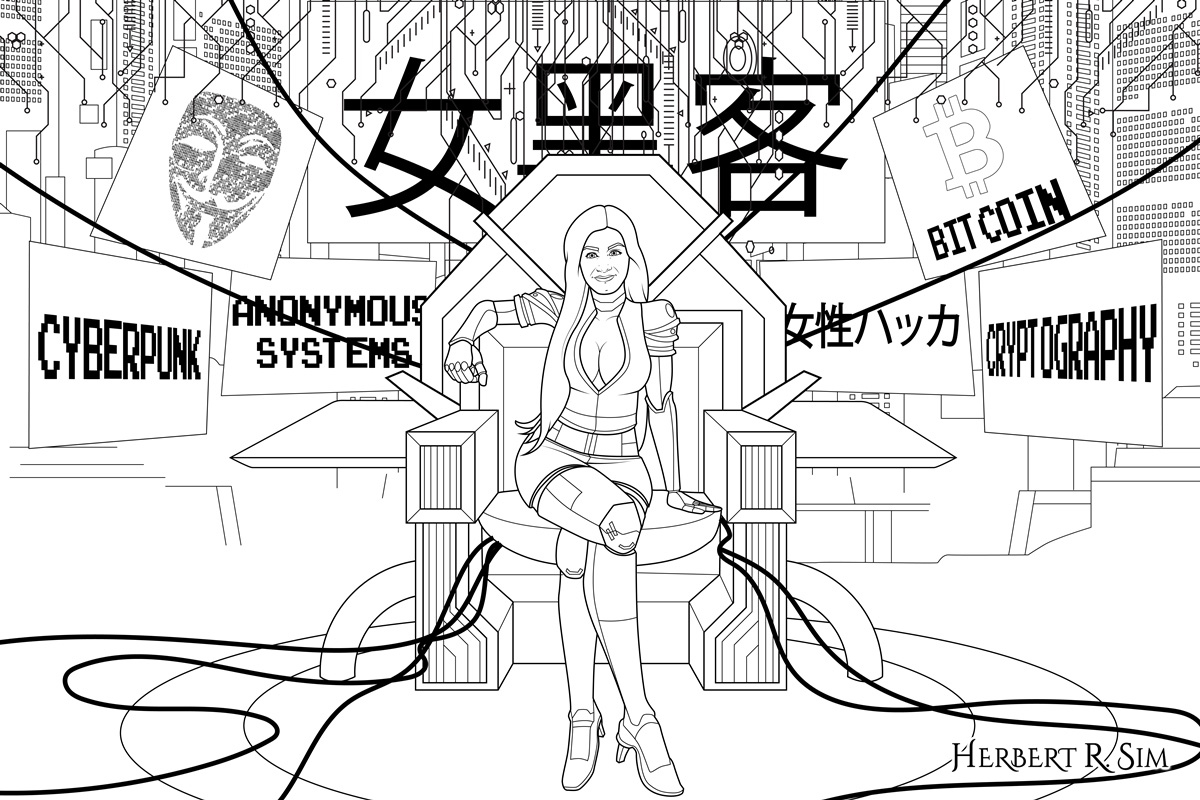 Following up on my earliest illustration of Cypherpunk Girl, I’ve decided to work on version 2 of it featuring Maria Khramtsova, Lead Researcher at Crypto Chain University, with the big words behind her “女黑客” – Female Hacker.

A cypherpunk is any activist advocating widespread use of strong cryptography and privacy-enhancing technologies as a route to social and political change. Originally communicating through the Cypherpunks electronic mailing list, informal groups aimed to achieve privacy and security through proactive use of cryptography. Cypherpunks have been engaged in an active movement since the late 1980s.

The following paragraphs are also worth including:

Until about the 1970s, cryptography was mainly practiced in secret by military or spy agencies. However, that changed when two publications brought it out of the closet into public awareness: the US government publication of the Data Encryption Standard (DES), a block cipher which became very widely used; and the first publicly available work on public-key cryptography, by Whitfield Diffie and Martin Hellman.

The technical roots of Cypherpunk ideas have been traced back to work by cryptographer David Chaum on topics such as anonymous digital cash and pseudonymous reputation systems, described in his paper “Security without Identification: Transaction Systems to Make Big Brother Obsolete” (1985).

In late 1992, Eric Hughes, Timothy C. May and John Gilmore founded a small group that met monthly at Gilmore’s company Cygnus Solutions in the San Francisco Bay Area, and was humorously termed cypherpunks by Jude Milhon at one of the first meetings – derived from cipher and cyberpunk. In November 2006, the word was added to the Oxford English Dictionary. 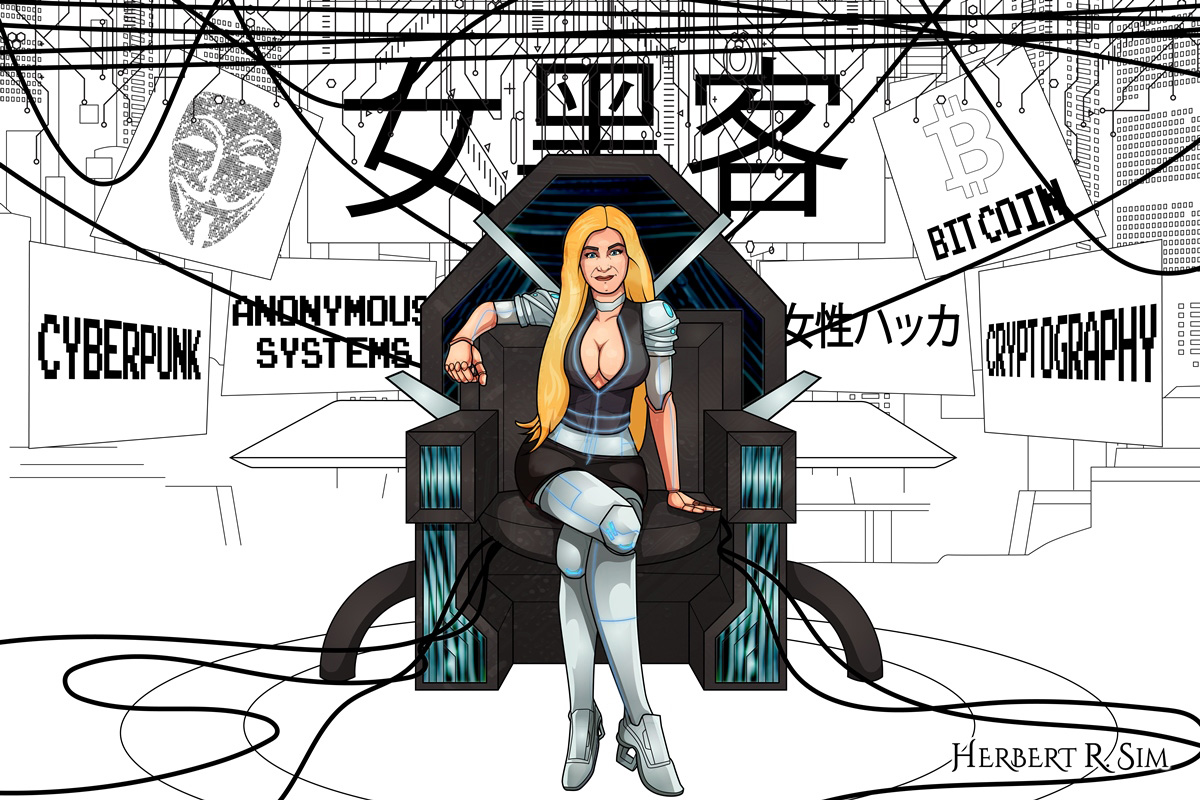 Here is the Work-In-Progress as I color in the character – Cypherpunk Girl, in futuristic style. If you look closely, she is ‘upgraded’ into a cyborg with customized titanium armor. Her heels include a blade which allows her to ice-skate and simultaneously used as a weapon.

It should be noted that while the term “cypherpunk” is a humourous reference to the contemporary “cyberpunk” scene, the two philosophies/scenes are not as closely related as the name suggests.

In terms of how “cypherpunks” would define themselves, we can actually look to founding cypherpunk Eric Hughes’s words for a much more succinct definition:

This comes from “A Cypherpunk’s Manifesto” which was posted by Hughes to the Cypherpunks Mailing List on 9th March 1993. In this document he argues for a cypherpunk ethos which elevates action over talk. He believed that instead of debating the fineries of theoretical systems, cypherpunks should get to work writing the cryptographic tools that will enable them to bring more privacy and liberty into the word.

Modern-day cypherpunks still hold that ethos close to their heart. Just as “The Crypto-Anarchist Manifesto” was required reading for that section, “A Cypherpunk’s Manifesto” is essential reading for all newcomers.  (Check out CypherpunkManifesto.com) 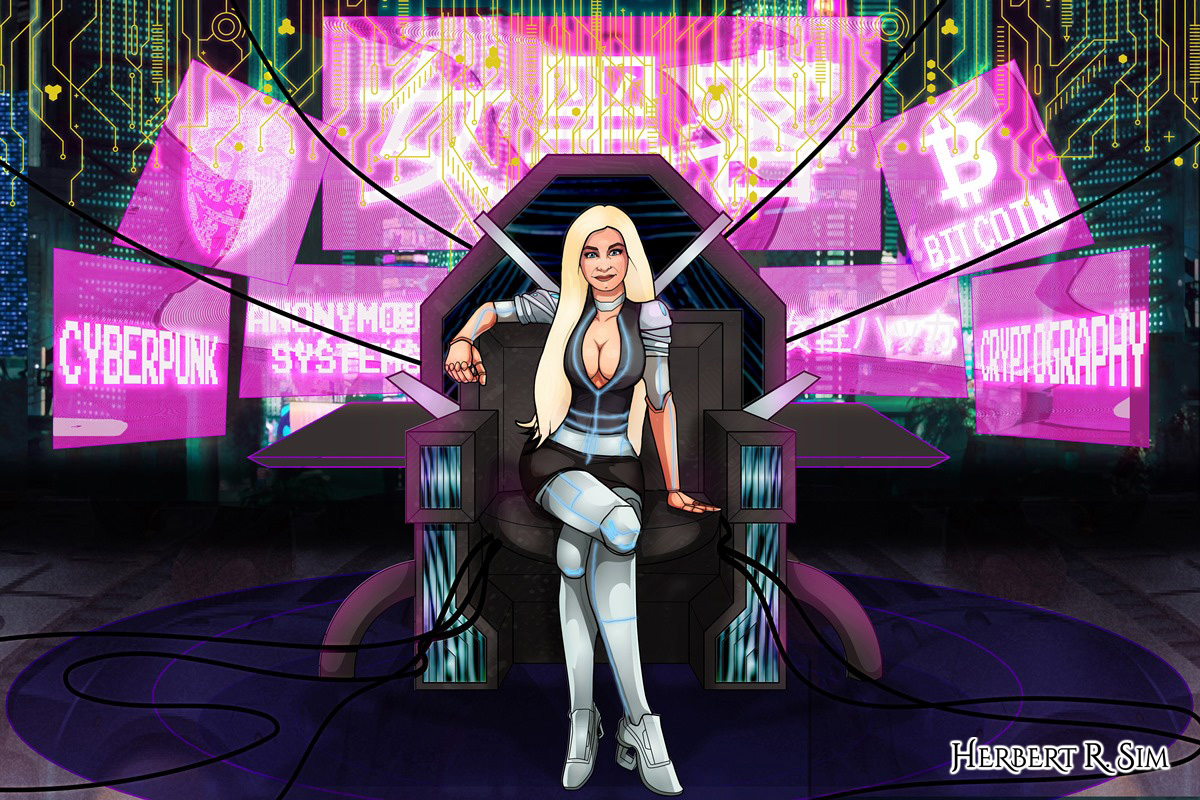 In my final illustration, the background is colored in, the overall style is in Cyberpunk style, with neon colors and glow, with the words – CyberPunk (赛博朋克), Anonymous Systems, Bitcoin (比特币), and Cryptography (密码学). Her costume and body armor is inspired by the movie TRON: Legacy.