The global movement to maintain meaningful human control over the use of force in autonomous weapons systems gained momentum in April this year in the course of the fifth international meeting on lethal autonomous weapons systems (LAWS). A total of 82 countries participated in this meeting at the Convention on Conventional Weapons (CCW), along with United Nations agencies and other non-government organisations and academics.

This momentum notwithstanding, it must be recognised that the issue of LAWS is a complex one. Different countries have taken different positions on LAWS depending on their respective national interests, strategic realities, geopolitical objectives, etc.

It is worth taking a look at the national positions and technological capabilities of a select few countries with regards to LAWS in order to gain a better appreciation of this complex conundrum facing the international community. 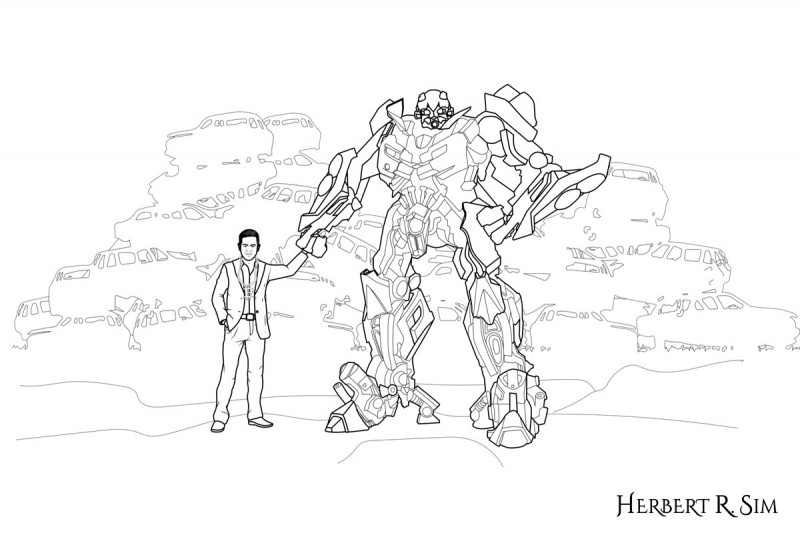 My latest illustration features myself a.k.a. TheBitcoinMan, friends with Transformers’ Bumblebee.

For major powers such as the US, Russia and China, LAWS is a strategic issue that is part of a technological race for global superiority.

The US Department of Defense’s (DOD) policy is that autonomous and semi-autonomous weapons should “allow commanders and operators to exercise appropriate levels of human judgment over the use of force,” and that such judgment should be in accordance with the laws of warfare. However, the US does not support a ban on autonomous systems. In fact, it is fast developing its autonomous capabilities.

In 2017, the US DOD released a video showing an autonomous drone swarm of 103 individual robots in flight, their flight paths designed in real-time by an advanced algorithm. While the drones in the video were not weaponised, the technology to do so is rapidly evolving.

Russia has taken a similar position. While it acknowledges the position that there will be a man in the decision-making loop with respect to autonomous weapons, Russia asserts that states have the sovereign right to build and test new technologies without international oversight or interference. As a case in point, Russia’s world-renowned arms maker Kalashnikov is reportedly in the process of developing a 20-tonne reconnaissance and attack robot.

China has taken a slightly different position compared to the US and Russia. In the April 2018 meeting on LAWS, China’s delegation announced its “desire to negotiate and conclude” a new protocol for the CCW “to ban the use of fully autonomous lethal weapons systems”. It should be noted that China has called for a ban on the use of LAWS, but not its development. As a major power, China too does not want to lose out on the technological race for what may well become the conventional approach to war in future.

China has numerous projects on the development of fully and semi-autonomous tanks, aircraft and seaborne vessels, but information on these projects is very limited. A known example is the conversion of old Soviet tanks into autonomous vehicles. Versions of the ZTZ-59 tank have been modified to operate without a human driver. In this case, the vehicle’s purpose is to act as a moving target for exercises and weapons targeting. While the ZTZ-59 robotic tank is used for non-combat purposes for now, it is a matter of time before the Chinese military deploys greater numbers of robotic vehicles.

Small State in a Tough Neighbourhood

Five states at the CCW meeting explicitly rejected moving to negotiate a new international law on fully autonomous weapons. Israel, a hi-tech military power, was one of them (France, Russia, UK and US being the others). While there could be any number of reasons for Israel’s position, it is conceivable that autonomous weapons systems allow a small state such as Israel to overcome manpower constraints and defend itself in the volatile region it is located in.

An example is the RAMBOW unmanned ground vehicle manufactured by Meteor Aerospace. Built for a range of defence and homeland security missions, RAMBOW can participate in missions such as ground warfare, intelligence gathering, logistical supply, as well as facilities and border defence. It has a forward mount that can carry a remote-controlled weapon station with a heavy machine gun, or other mission equipment. 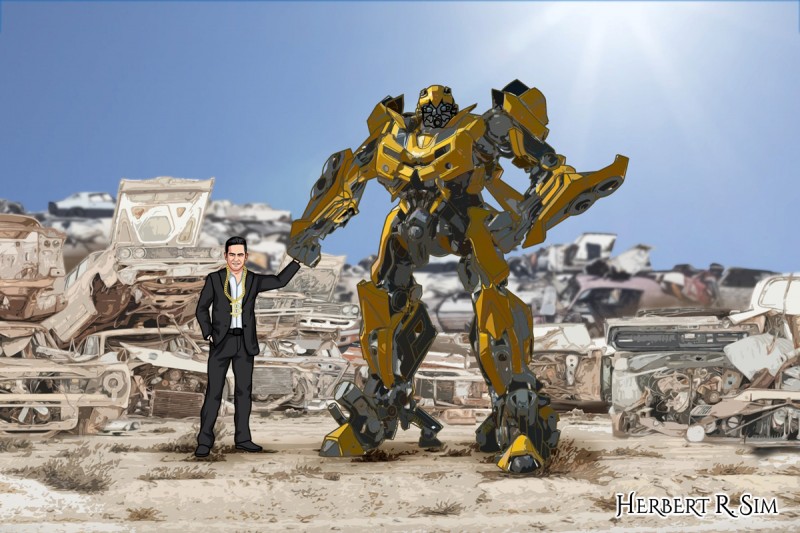 In the illustration, I am seen wearing my iconic gold ‘Bitcoin Chain’, and fist-bumping Transformers’ Bumblebee.

In Asia, the likes of South Korea and India, major players in East and South Asia respectively, have also shown interest and invested resources in LAWS.

While South Korea’s exact positon on LAWS in unclear, it is very much part of the global conversation, having shared its views on LAWS in multilateral fora such as the CCW and the United Nations General Assembly. South Korea belongs to a large group of countries which have yet to take a definite policy stand on LAWS, and have adopted a wait-and-see approach as the technology as well as the debate on its use evolves.

South Korea is also developing its own LAWS capabilities in a bid to understand the technology and harness its potential. A series of sentry robots dubbed SGR-A1 are posted along the South Korean border facing North Korea. SGR-A1 has sophisticated object and pattern recognition systems which are programmed to target any human approaching. If the human cannot provide a voice access code, the robot can sound a loud audio warning or shoot its machine guns. South Korean officials have claimed that the robot cannot fire its weapons without human intervention, although there are media reports claiming the contrary.

India has called for balancing the lethality of LAWS with military necessity, while waiting to see how the global conversation progresses. However, it too is not standing still on the technological front. India is taking steps to prepare its defense forces for a future where autonomous technologies will play a pivotal role in warfare.

A 17-person task force appointed by the Indian government is working on an artificial intelligence roadmap for India’s armed forces. The task force’s mandate in the next two years is to recommend ways in which machine learning can be incorporated into the country’s aviation, naval, land, cybersecurity, nuclear, and biological resources. And it particular to the areas of autonomous weapons systems and unmanned surveillance.

These are just a few interesting cases that illustrate the complex and wide-ranging debate surrounding the development of LAWS. While it is encouraging that the international community is getting organised and debating the issue, there must be concrete outcomes soon lest the technology develops and gets widely operationalised before an international treaty or consensus is established. 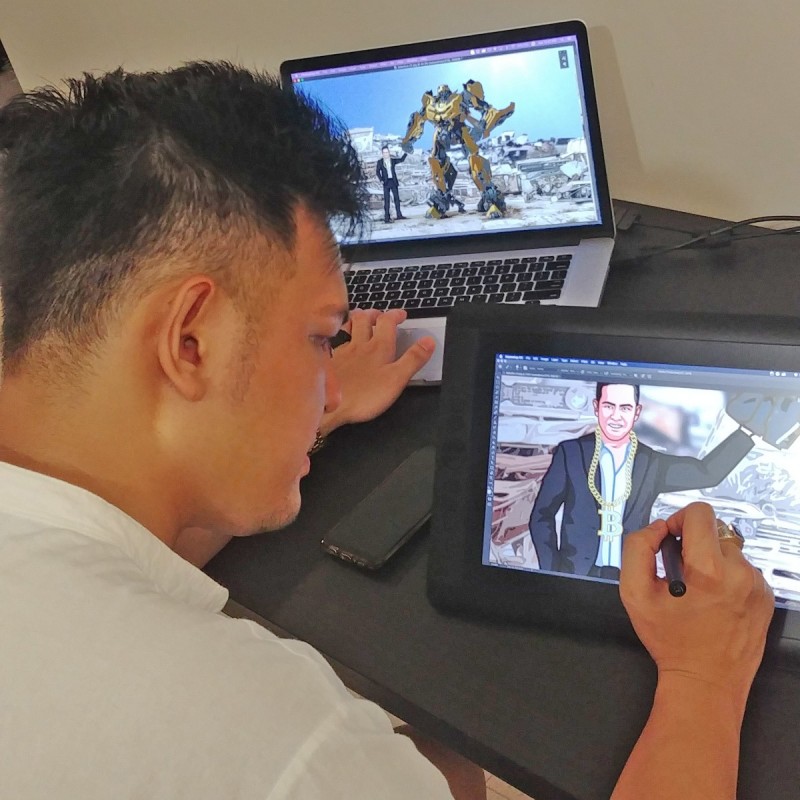