State-Owned Cryptocurrency: A Reality With China? 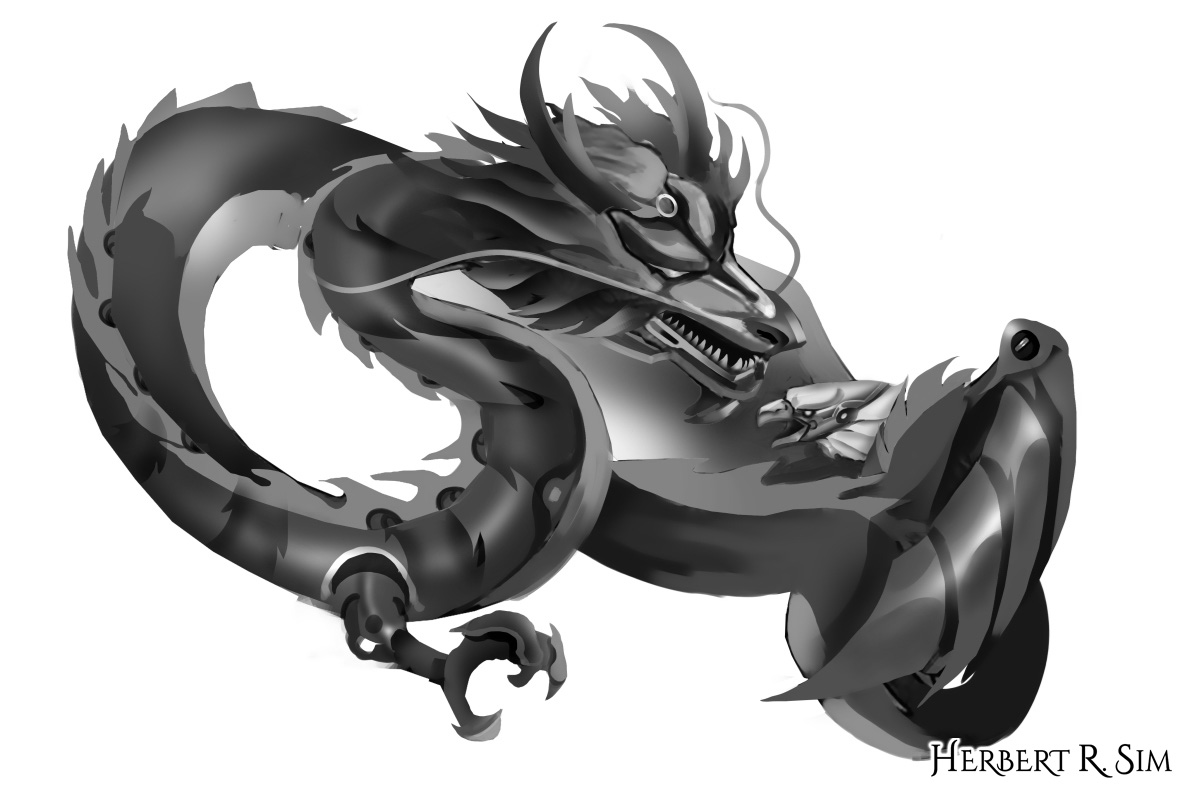 In my latest illustration sketch, it is a follow-up to my earlier illustration “The Eagle and the Dragon in the International Order“

The writing is on the wall when it comes to the United States faltering off its tracks of world domination, and in turn, down a notch in defining the world’s financial systems.

In a recent Foreign Policy report, Paul Krugman confesses that he together with notable economists failed to identify hyperglobalisation’s economic and social upheaval on the US. China’s blossoming and emergence on the world stage was dismissed as “fearmongers of competition”. Then, the noted New York Times opinion columnist argued, “Free trade will only have a minor impact on your prosperity.”

The US Federal Reserve is also in the midst of restarting its quantitative easing measures, a move aimed at ensuring cash supply stays consistent and as a stop-gap against pronounced turmoil in the short-term markets, says the Financial Times.  The stock market looks as murky as the currency outlook argues experts.

“Will these stocks [such as Facebook, Netflix, Alphabet, Microsoft and Amazon] produce such impressive growth that they will justify their current market cap, or are these implausible growth expectations? We don’t have a crystal ball, of course, but we would recommend not betting on the momentum continuing,” Rob Arnott, chairman of Research Affiliates, told Barron’s sister publication Financial News.

The tense tenterhooks of the trade war

Ironically, fast forward 20 years and it’s a gridlocked trade war with the two major superpowers, China and the US, embroiled. The evident ascent of China looks set to amplify with reports of an impending launch of a national digital currency that has been in the pipeline for almost five years.

Forbes argues the Chinese government’s focus on blockchain technology is a carefully calibrated one that focuses on domestic stability and sustained economic growth.

The internationalisation of China’s crypto domination

Industry experts say that other global economies run the risk of being left behind if they do not develop their own digital currency based on blockchain and continue to stifle the adoption of cryptocurrencies.

One Belt Silk Road, a bridge between trade, data and currency

The Silk Road was a network of trade routes which connected the East and West, through cultural, political, religious and economic implications. Today, renamed the one Belt Silk Road, it is positioned as a stimulant of infrastructure linkages that will “spur development, goodwill and economic integration.”

China still maintains this historic silk route as one of its economic priorities, leading to expanded links with these countries through its cryptocurrency. 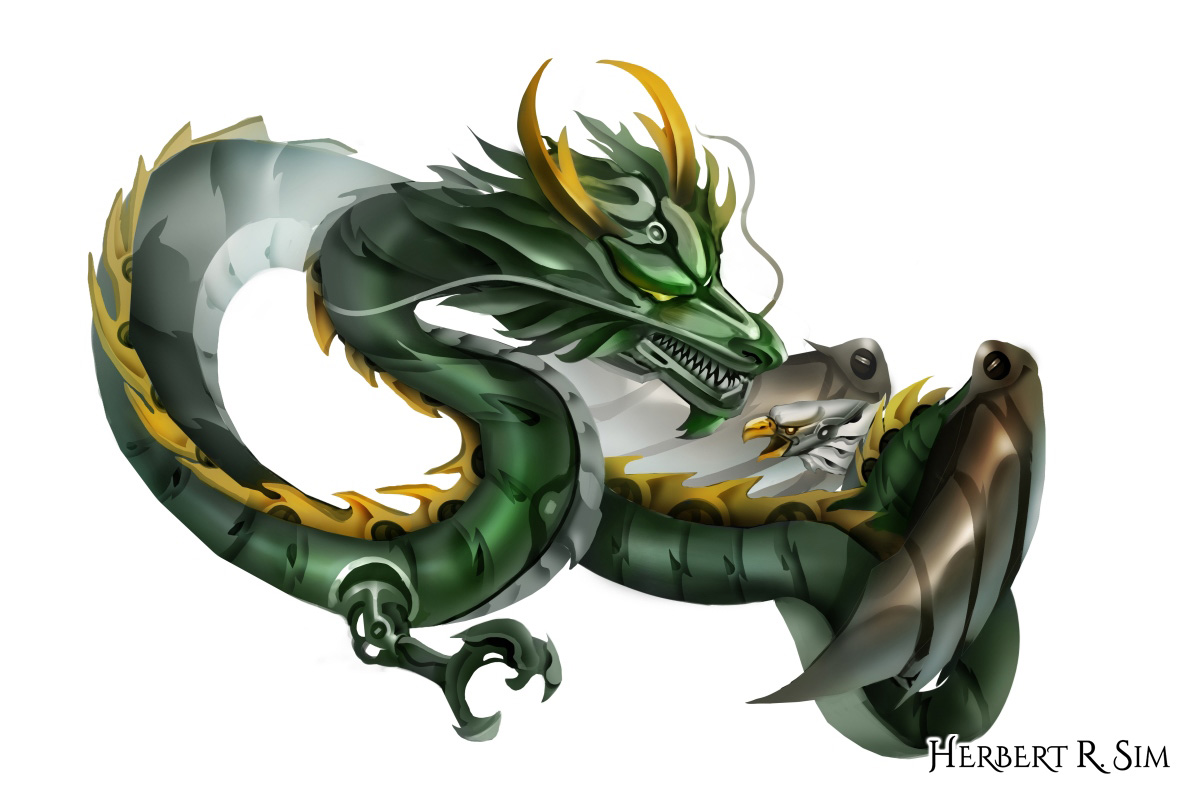 In my latest illustration, it showcases two robots, one designed like a Chinese Dragon, while the other designed as an American Eagle; both are entwined in a ferocious battle. And it would seem that the Chinese Dragon has the upper hand, almost winning the battle.

Goldman Sachs argues that the economic potential of Brazil, Russia, India and China is such that they can become the four dominant economies by 2050. The Goldman Sachs global economy team launched a response to its initial study on the BRIC in 2004. In this report it is estimated that the participation of BRIC economies in global economic growth could rise from 20% in 2003 to more than 45% in 2025.

To milk the potential of this promising alliance, China will not miss the opportunity to offer its cryptocurrency to be the mutual currency of these countries and it is likely that proposals and economic incentivisation will be difficult to turn down.

The US and China’s governments are proactively prioritising blockchain

As this pragmatic versus purist debate rages on, governments are beginning to act. The Organization for Economic Co-operation and Development (OECD) has created the Blockchain Policy Centre, which is a global platform for countries to address challenges and opportunities raised by this distributed ledger technology. Last month, it held a “Tech for Trust” conference in Paris where blockchain was the top topic and many countries showed considerable interest, Bloomberg reports. FinTech4Good’s president Xiaochen Zeng noted that, for example, he has advised the government of Kazahkstan about crypto regulations, which has resulted in two new policies. This is where the United States possibly pales in comparison, with the lack of a trusted ally when it comes to fintech regulatory exchange.

China’s successful breakthroughs in technology have been delicately engineered

The success of AliBaba and Tencent have largely been due to China’s protectionist regulatory measures that have blocked Facebook from entering the populous, diverse nation that recently celebrated the 70th anniversary of its Communist Party.

The government of China has never had to manage cryptoassets that cannot be banned or sanctioned without the complete blocking of the Internet. Should cryptocurrency gain widespread acceptance, China will need to think through a new monetary policy that can pivot the country towards a less trade-reliant economic strategy, which is already occurring concurrently due to the trade war.

Crypto and WeChat in a mutual partnership

WeChat, owned by Tencent, is the most popular social media platform in China and also offers the convenience of digital payments. Its popularity can be assessed by the fact that on a global scale, WeChat has about 1.1 billion monthly active users, while Facebook leads the package with 2.3 billion active users.

The Bank of China could potentially enter a new paradigm and collaborate with the leading player to accept payments, currency flows and bank deposits in cryptocurrency, preventing the yuan from being devalued. 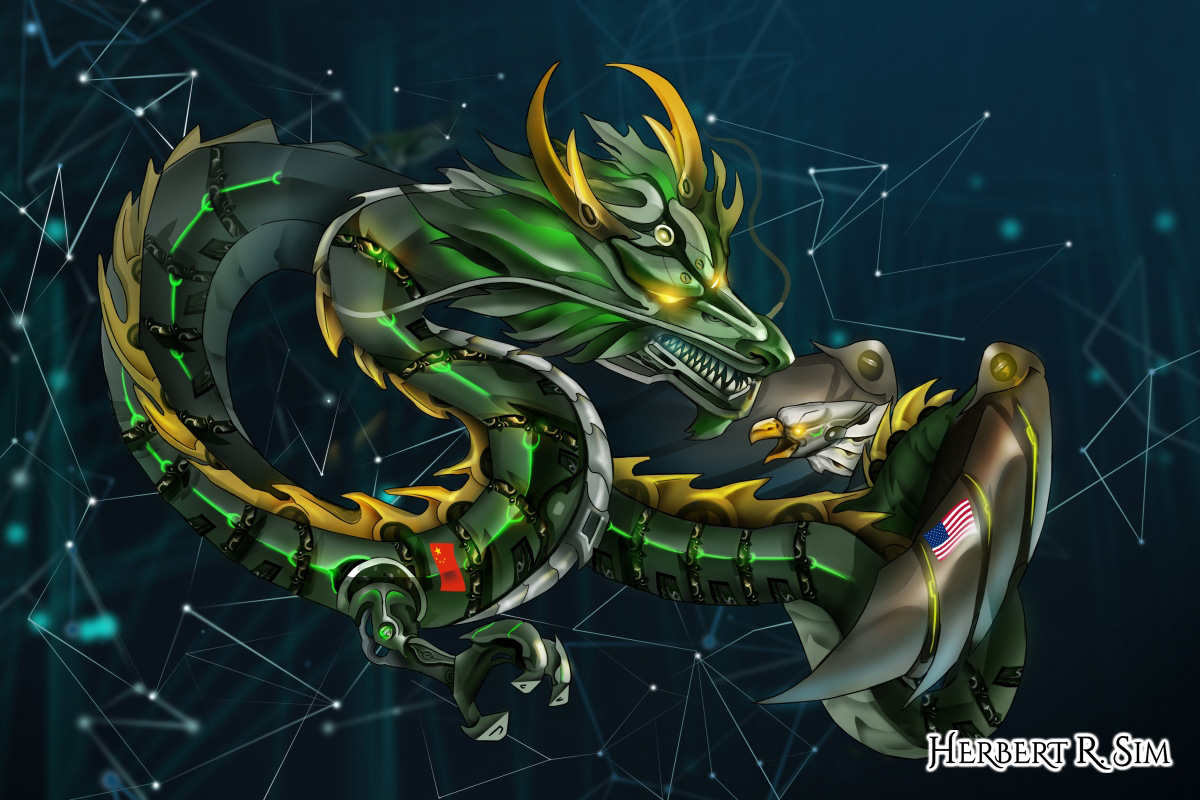 Here in my final illustration, to make it less subtle, I’ve added in the country flags of China and America on the Chinese Dragon and American Eagle respectively. The background is fashioned in Blockchain technology style.

Disruption is probably more natural to China, than the US

In China, the industry is not as developed and so it offers more opportunities for disruption, such as in crypto-banking, especially if the Chinese government supports the effort, according to Cao Huining, cofounder of Usechain, in an interview with Asian Banker. Compare that meteoric liberalisation of China with the US and its entrenched and volatile industries together with financial institutions that are lagging due to their inability to scale. However, Chinese cryptocurrency players will still need to tread carefully as crypto-blockchain companies in the nation-state of economic tiers, may have to play by existing rules to get scale globally.

A path ahead for China that isn’t without challenges

China is leveraging the full extent of its security state to promote blockchain. It also plans to use the technology towards its policies of state control like the infamous ‘social credit system’ or monitoring anti-establishment programmes or content featuring dissent.

As blockchain’s emergence is witnessed in China, how it develops as a best practice leader could create a contradictory if not inconclusive picture. As no economic superpower has adopted blockchain before as state policy, this could create a new world order from monetary policy, asset allocation, institutional practices to trade parameters.