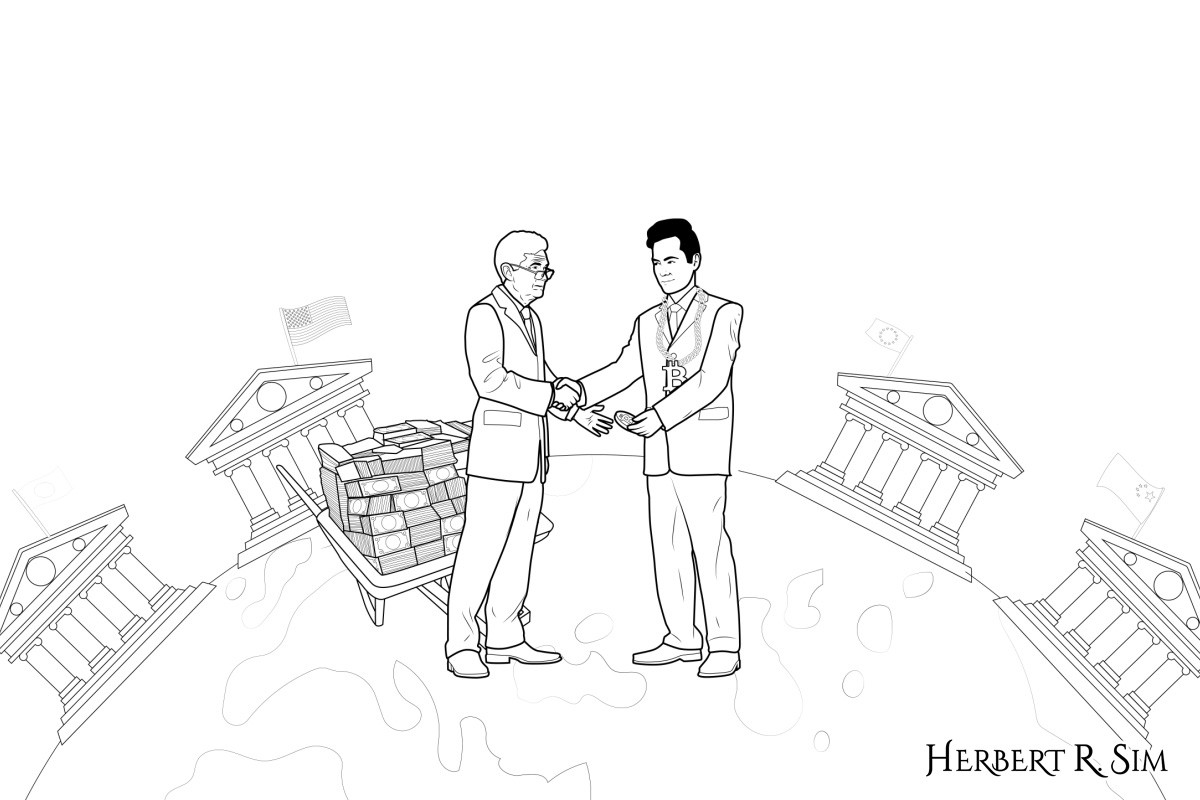 My latest illustration sketch featuring my persona ‘The Bitcoin Man’, shaking hands with Federal Reserve Chairman Jerome Powell, and trading him a BITCOIN for his entire trolley of fiat currencies.

The slump in cryptocurrency valuations seems to be coming to an end after more than a year. The last few weeks have been very positive particularly for altcoins in the crypto-market. Looking beyond that, some cryptocurrency observers foresee that the catalyst for the next bitcoin price rally could come from an unexpected source: the world’s central banks that might want to stock up on reserves of bitcoin as a form of digital gold.

Such views underscore bitcoin’s importance as a cryptocurrency that is widely adopted and enjoys easy liquidity in virtual currency markets worldwide.

According to Garrick Hileman, the head of research at Blockchain.com and research associate with the London School of Economics, bitcoin has been created as a store of value rather than necessarily a means of exchange. As such, bitcoin could eventually become digital gold in a future where central banks could start to purchase and stockpile the most popular digital asset (currently at a market capitalisation of US$73.2 billion).

Hileman believes that if central backs such as the US Federal Reserve and the European Central Bank start purchasing large amounts of bitcoin and other cryptocurrencies to build up their respective reserves, it could trigger ‘an unprecedented wave of demand’. Intriguingly, Eugene Estebeth, a former central banker with the South African Reserve Bank, wrote previously: “most G7 central banks will likely use external fund managers to invest in cryptocurrencies over this new epoch. But don’t expect this information to be freely available”.

Other industry players have expressed bullish sentiments in the same vein about bitcoin as a store of value. In March 2019, Galaxy Digital CEO Michael Novogratz said Bitcoin could easily overtake gold’s total market cap of $8 trillion within the next 20 years. Novogratz’s Galaxy Digital was one of the first major investment funds focused on blockchain, crypto and other digital assets.

In addition, the CEO of Block.one Brendan Blumer tweeted in that same week that “over the next two decades, #Bitcoin will replace #gold as the leading commodity to store value”. And in January 2019, the Winklevoss twins, founders of Gemini digital currency exchange and of Facebook fame, stated their belief that bitcoin is better at being gold than gold and that if they are right over time, the market cap of bitcoin will surpass the $8 trillion dollar market cap of gold. 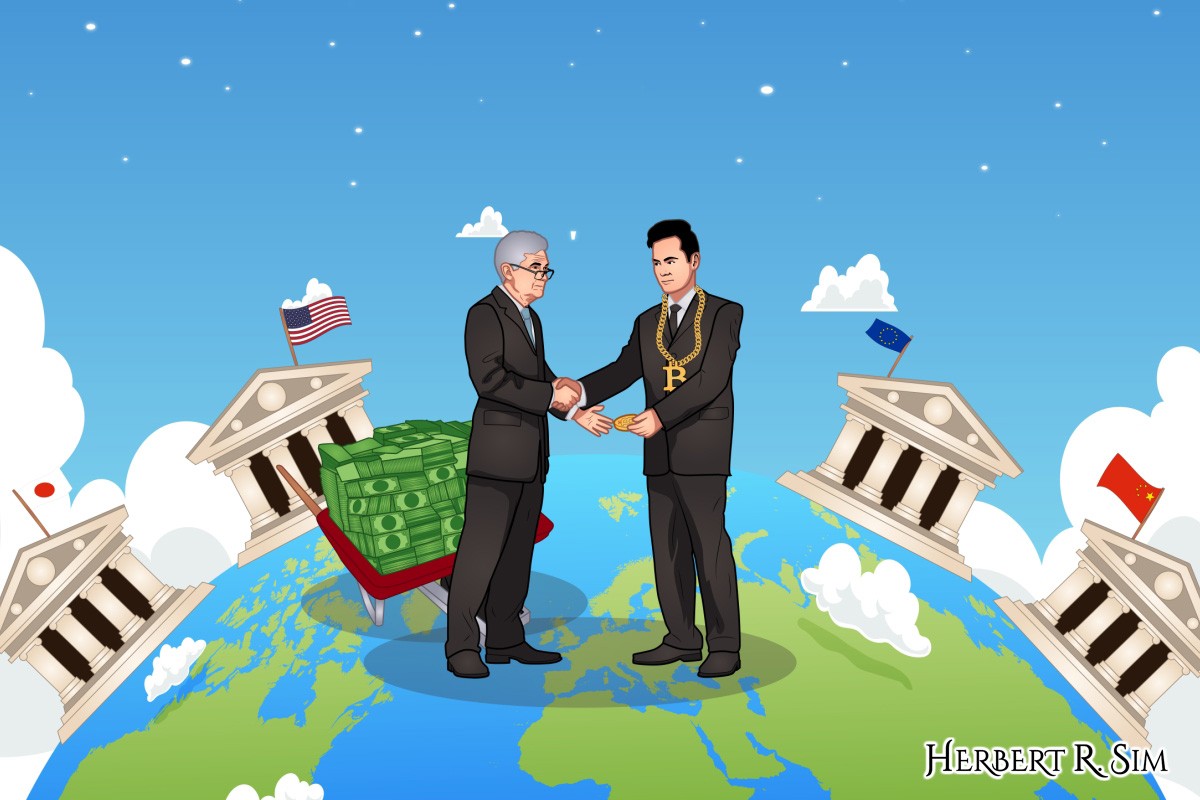 In the background featured are four central banks with the country flags of Japan, U.S.A, European Union, China, atop each of them respectively.

Central banks and governments the world over have begun to explore and develop digital versions of their respective fiat currencies and other applications related to its underlying blockchain technology. Already, Singapore and Malta have emerged as blockchain and cryptocurrency hubs in areas such regulations and innovation.

At the global institutional level, Christine Lagarde, head of the International Monetary Fund (IMF), proposed a new path forward for central banks worldwide: the digitalisation of fiat currencies. In a speech at the Singapore Fintech Festival in November 2018, Lagarde made the case for the state’s role in supplying money to the digital economy. Central bank-backed digital currencies could achieve greater financial inclusion, security and consumer protection. While she surmised that the case for digital currency is not universal, it should be investigated further – seriously, carefully and creatively.

Notably, she acknowledged that cryptocurrencies such as bitcoin, ethereum and ripple are making their mark in the cashless world, constantly reinventing themselves in order to offer more stable value, and faster and cheaper settlements.

Recognition by Banking Institutions in the US

The cryptocurrency needle is moving in a positive direction in the US, where there is a tacit acceptance of the rising status of cryptocurrencies among financial institutions. For example, the Federal Reserve Bank of St. Louis recently released a blog post titled ‘Three Ways Bitcoin Is Like Regular Currency’. The post was based on an earlier research paper which stated that bitcoin units, much like currencies like the US dollar and the Euro, have no intrinsic value.

Furthermore, in June 2018, the Federal Reserve Bank of St. Louis added cryptocurrencies to its Federal Reserve Economic Data (FRED) database. It added bitcoin, bitcoin cash, ethereum and litecoin to the database. Although this may appear to be a small gesture, it signals to most observers the maturation of cryptocurrencies in the eyes of arguably the most important central banking institution in the world. 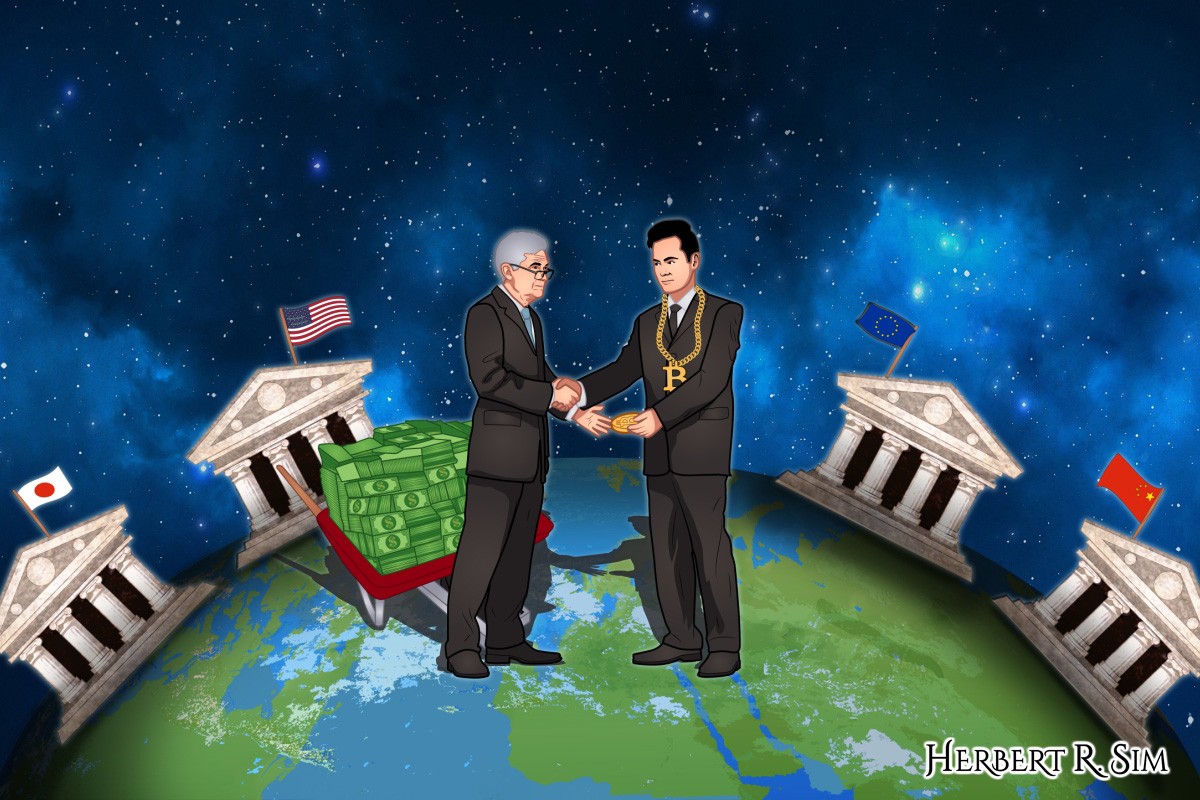 In the final illustration in full color, you see the full detailing, of the world map, and the gradient of the central banks, and even the shadows of the characters.

Developments in China and Japan

China continues to develop its capabilities in developing a digital currency. The Digital Currency Research Lab at the People’s Bank of China (PBoC), China’s central bank, has filed more than 40 patent applications thus far as part of efforts to create a digital currency incorporating the core features of cryptocurrency and the existing monetary system.

In addition, the Chinese central bank is building on its human capital. In October 2018, it announced openings for four positions of crypto-related professionals with experience in blockchain, cryptography, security and chip design. It is also seeking experts in economics, law and finance who will be responsible for legal research, economic analysis, risk management and policy research on “legal digital currency.”

Financial institutions in Japan have gone digital via the launch of stablecoins. Just this month, the Mizuho Financial Group launched its digital currency service named J-Coin Pay. Its app integrates blockchain-based stablecoins with a service allowing users to send and receive funds, pay with a smartphone, or make deposits and withdrawals to and from the bank accounts of participating financial institutions.

The launch of J-Coin Pay occurs in the context of Japan’s plans to boost cashless payments. The Japanese government has set a target of ensuring that 40% of all financial transactions are cashless by 2025. It is thus entirely conceivable that already established crypto-technology and currencies would form part of the solution to achieving this goal.

In light of these developments worldwide, it is a matter of time before central banks and other state-related institutions enter the ambit of cryptocurrencies which have already established themselves as a useful technology for a wide range of industries. Cryptocurrencies such as bitcoin and ethereum have grown in scale and application for almost a decade. A convergence between central banks and cryptocurrencies is conceivable against the backdrop of the growing digital economy.