Journey to the (Bitcoin) West 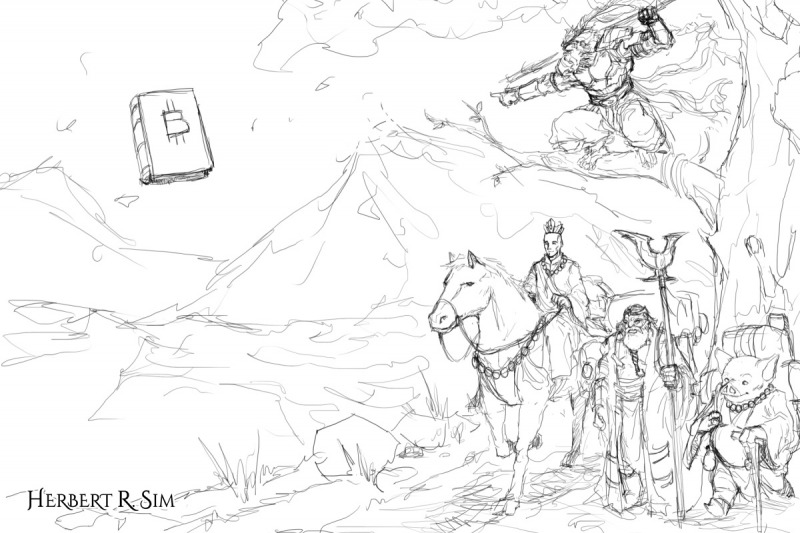 The all famous Chinese novel ‘Journey to the West’ for sacred scriptures, but in my illustration, for the legendary ‘Book of Bitcoin’.

In my latest illustration, inspired by the famous “Journey to the West” (西遊記) Chinese novel, I feature the 5 characters – Monk, Monkey King, Pigsy, Sandy, travelling wild west to obtain the legendary sacred “Book of Bitcoin”.

“Those who do not believe in magic will never find it.” — Roald Dahl

The novel was published in the 16th century during the Ming dynasty and attributed to Wu Cheng’en, an extended account of the legendary pilgrimage of the Tang dynasty Buddhist monk Xuanzang who traveled to the “Western Regions” – Central Asia and India, to obtain Buddhist sacred texts (sūtras) and returned after many trials and much suffering.

The Ming dynasty novel adds elements from folk tales and the author’s invention, that is, that Gautama Buddha gave this task to the monk (referred to as Tang Sanzang (唐玄奘) a.k.a. Tripitaka in the novel) and provided him with three protectors who agree to help him as an atonement for their sins.

These disciples are Sun Wukong (孫悟空) a.k.a. Monkey King, Zhu Bajie (豬八戒) a.k.a. Pigsy, Sha Wujing (沙悟浄) a.k.a. Sandy, together with a dragon prince who acts as Tang Sanzang’s steed, a white horse.

Journey to the West has strong roots in Chinese folk religion, Chinese mythology, Confucianist, Taoist and Buddhist philosophy, and the pantheon of Taoist immortals and Buddhist bodhisattvas are still reflective of some Chinese religious attitudes today.

Enduringly popular, the tale is at once a comic adventure story, a humorous satire of Chinese bureaucracy, a spring of spiritual insight, and an extended allegory in which the group of pilgrims journeys towards enlightenment by the power and virtue of cooperation. 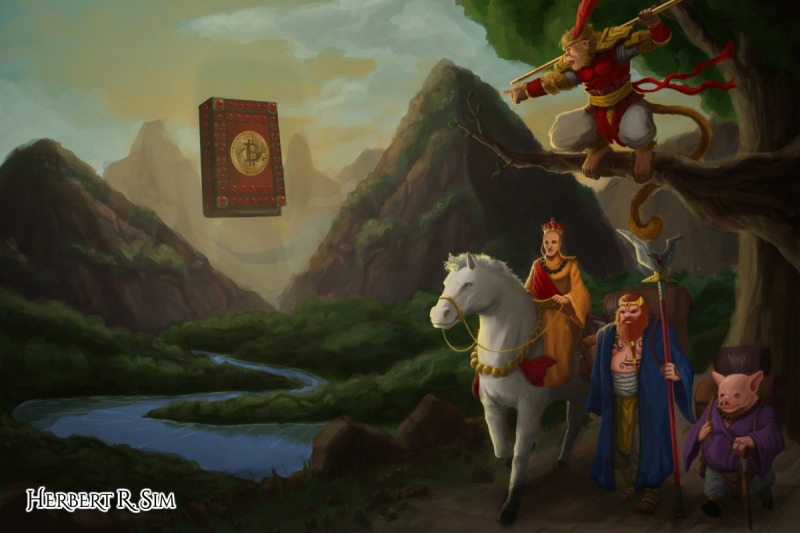 In my final illustration, I revised the size of Pigsy and added his choice weapon – the rake, and enhanced on the aspect ratio of the ‘Book of Bitcoin’.