Ethereum: More than a Digital Currency 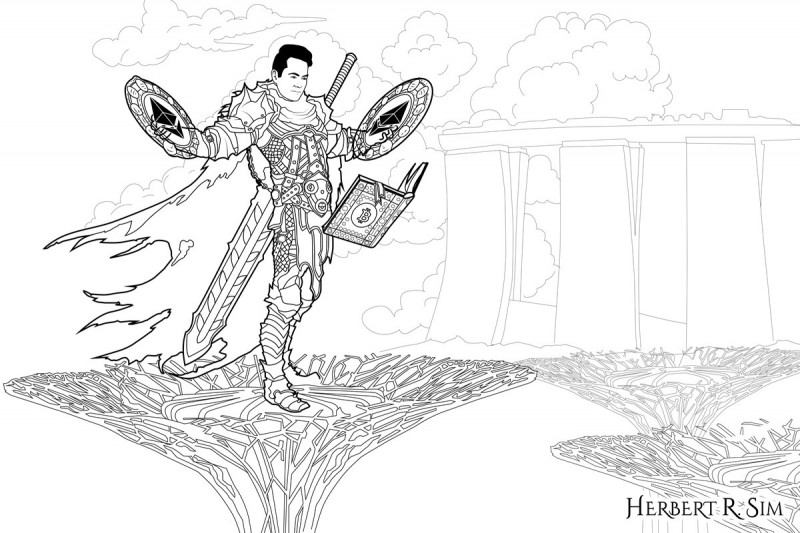 In my latest illustration, I sketch a fantasy+real world style, featuring myself atop one of the super-trees at Gardens By The Bay, with Marina Bay Sands in the background.

Mention cryptocurrency and Bitcoin comes to mind. The world’s first decentralised digital currency, released in 2009, is currently valued at approximately USD $425. However, the technology behind cryptocurrencies, blockchain, has value beyond facilitating peer-to-peer currency exchange. Enter Ethereum, which seeks to capitalise on the vast potential of blockchain.

Proposed in late 2013 by cryptocurrency researcher Vitalik Buterin, Ethereum went live in July 2015. As of 15 April 2016, Ethereum was valued at USD $8.24 with a volume of 12,179,000 and market capitalisation of $663,169,000. The value of Ethereum may not seem like much compared to Bitcoin, founded by Satoshi Nakamoto, but bear in mind that Ethereum is a more recent entry to the world of blockchain and cryptocurrencies. Ethereum has seen a stellar rise thus far in 2016; the price of Ether has skyrocketed a whopping 776% since the turn of the year. Volumes have shot up an astounding 5810% and market capitalisation has jumped an impressive 835%, underlining the massive potential of Ethereum.

Essentially, Ethereum is an open software platform based on blockchain that enables developers to develop and deploy decentralized applications for a wide range of purposes. Like Bitcoin, Ethereum is a distributed public blockchain network. However, the most important difference between the two is that Ethereum differs significantly from Bitcoin in purpose and capability. While Bitcoin represents one specific application of blockchain, a peer to peer electronic currency exchange, the Ethereum blockchain focuses on running the programming code of any decentralized application. In the Ethereum blockchain, miners work to earn Ether, a type of crypto token that fuels the network. More than just a tradeable cryptocurrency, Ether is also used by application developers to pay for transaction fees and services on the Ethereum network. Those interested in the technical intricacies of Ethereum should definitely read a paper on the subject by Dr Gavin Wood, co-founder and lead of the Ethereum project.

A distinguishing feature of Ethereum, and a key marker of its potential, is the smart contract. A smart contract refers to computer code that can facilitate the exchange of money, content, property, shares, or anything else of value. On a blockchain, a smart contract functions as a self-operating computer program that automatically executes its instructions when specific conditions are met. Smart contracts define the rules and penalties around an agreement in the same way that a traditional contract does, and also automatically enforce those obligations. All transactions pertaining to the smart contract are stored and replicated on the decentralized ledger, or blockchain, which gives it a level of security and immutability, and renders it less vulnerable to censorship, fraud or third party interference.

While all blockchains are able to process code, most have limited capabilities. This is where Ethereum stands out. Instead of being bound by a set of limited operations, Ethereum allows developers to create whatever operations, or craft whatever smart contracts, they want. This opens the door for thousands of different applications that go beyond anything we have seen before.

Here is a GIF showcasing my work-in-progress coloring in the illustration, the colors used showcases an apocalyptic scene, with fireballs raining down from the sky.

A few of the areas Ethereum can be applied include insurance, healthcare, government and documentation of physical assets. Ethereum could impact the insurance industry through smart contracts that allow customers and insurers to manage claims in a transparent and secure manner. Smart contracts and claims could be recorded on the Ethereum blockchain and validated by the network, which would eliminate invalid claims. Automated claims payment processes linked to smart contracts will also mean policyholders get paid more quickly compared to today’s manual processes where even non-contested claims payments can take weeks or months.

Ethereum can shape how data is managed and secured in the healthcare industry. Personal health records could be encoded and stored on the Ethereum blockchain with a private key that would grant access only to specific individuals. Health data that is suitable for such purposes includes general information like age and gender, and medical history data like immunization history or vital signs. The Ethereum blockchain could also be used for general healthcare management such as drug management, test results and regulatory compliance.

In government, Ethereum’s capabilities can be a basis for government service provision in important areas such as more secure voting systems. Ethereum’s attributes of speed, security and auditability allow end-to-end verifiable voting systems which allow the voter to verify if their vote is correctly recorded and correctly counted. No vote hacking, election fraud or manipulation.

A novel use case for Ethereum is the tokenisation and documentation of physical assets. A Proof of Asset (PoA) protocol that uses Ethereum and a files system are used to track an asset through its chain of custody. Given Ethereum’s decentralised architecture, this allows for the open and public verification of an asset’s provenance without the need to rely on a centralised database or third party intermediary. This can be applied to assets such as gold bars and diamonds.

The wide range of Ethereum applications aside, challenges remain on the road ahead. A major challenge for Ethereum, as it is for other blockchain-based technologies, is building trust and understanding of blockchain to enable mainstream adoption by the public, industry and governments. This requires a consistent stream of communication and outreach extolling the virtues of Ethereum and winning sceptics over, while addressing any shortcomings.

The development of suitable business models that can maximise and monetise Ethereum’s capabilities is another major talking point. For all its attributes, at the end of the day, Ethereum needs to be commercially viable and sustainable. The commercial realisation of Ethereum’s potential will play a major role in defining how Ethereum is more than just a digital currency. 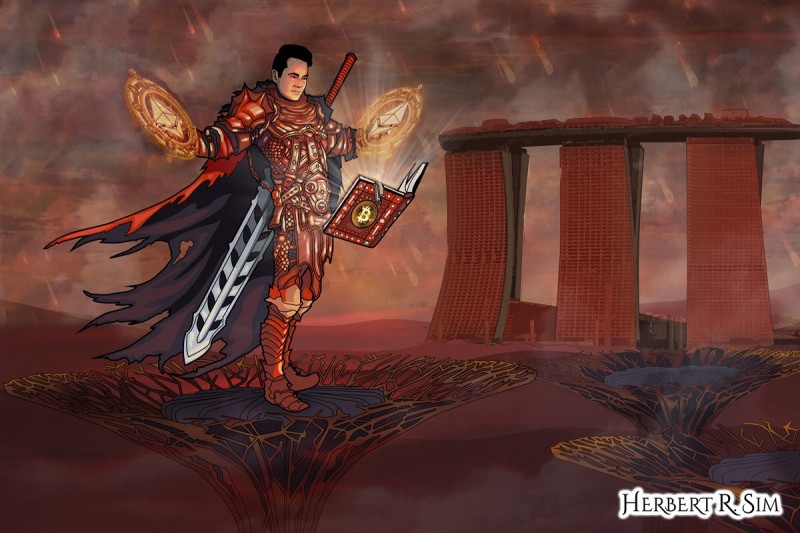 My character a wizard, reading from the legendary Book of Bitcoin, summoning an Ethereum counter-spell to reverse the fireballs falling down from the sky, in an attempt to save Singapore.