Magic Money: Can the Crypto Market Become the Central Bank’s Next Playground? 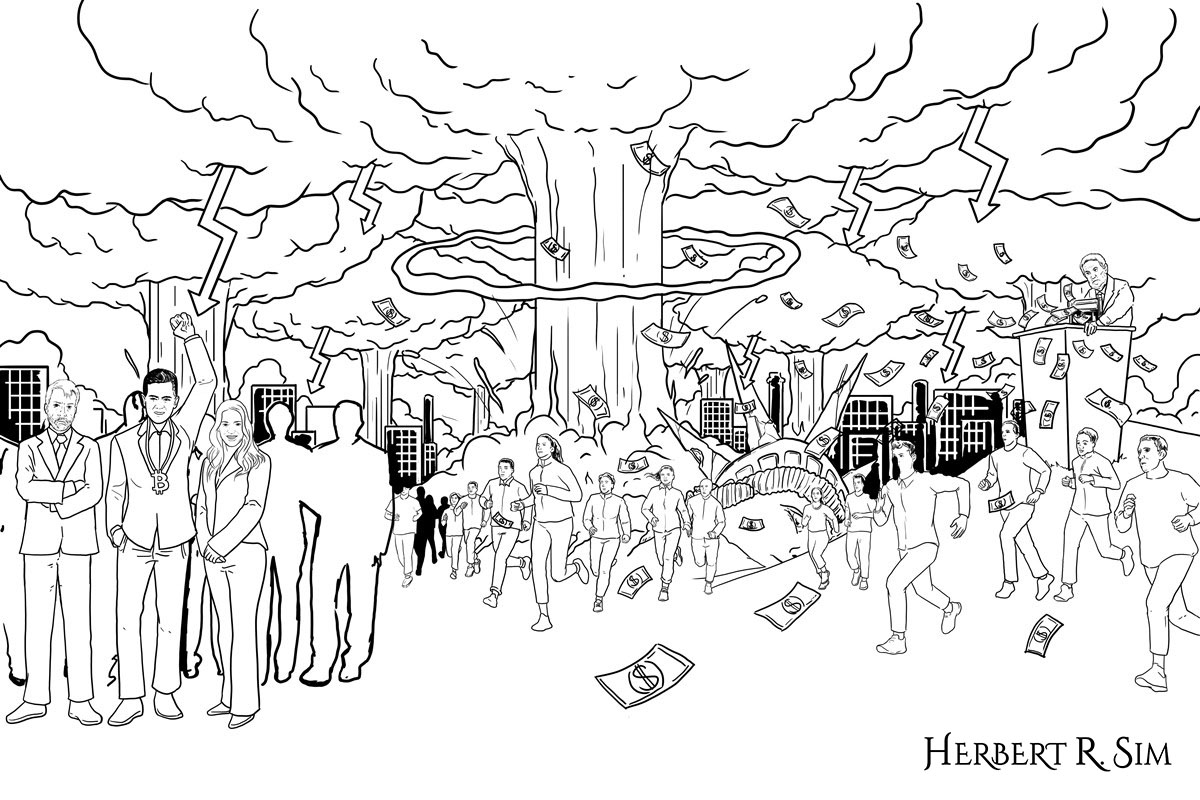 My illustration of Federal Reserve’s Jerome Powell printing of fiat, causing massive inflation and ‘Nuclear’ recession , the people are running away from fiat, towards Bitcoin – #PowerToThePeople

You may have heard of the Federal Reserve, also known as “the Fed”, on national television or in one of those sleek financial YouTube videos. And every so often, there’s a sense of uncertainty, this doom and gloom, as to how the market will react when the Fed announces a monetary policy.

The Fed’s influence is far-reaching, with its policies affecting not just the American economy and its people, but also the world. The globalisation of financial markets has enabled this ripple effect, and being the world’s largest economy, the US’ economic movements are generally more impactful as compared to that of other developed countries.

Of course, other factors play a part too: the strong US dollar, treasury bonds that other countries have also bought into, as well as dollar denominated debt that nations such as Turkey and Brazil hold – all play a role in the US economy’s influence and reflects a picture of economic openness on a macro level.

Just like central banks and authorities around the world, the Federal Reserve has a mandate to keep its national economy running smoothly and effectively.

US monetary policy decisions are made by the Federal Open Market Committee (FOMC) and while the mandate states that the Fed should “promote effectively the goals of maximum employment, stable prices and moderate long-term interest rates”, it is often considered to be a dual mandate: to tackle price stability and maximum sustainable employment.

Simply put, the goal of the monetary policy is to spur or restrain growth of overall demand for goods and services. For example, when demand drops, unemployment rises and inflation declines. To stimulate demand, the FOMC can ease monetary policy by lowering the federal funds rate – or the rate that banks borrow and lend to each other.

If demand for goods and services is overwhelming, unemployment rate could reach unsustainably low levels – leading to inflation. In this instance, the FOMC will increase interest rates to curb demand and consequently, bring down inflation.

From the above, it can be seen that fresh solutions have to be unearthed in order to add to the array of monetary policies and tactics that can deal with economic issues. The search has often been futile, until now. 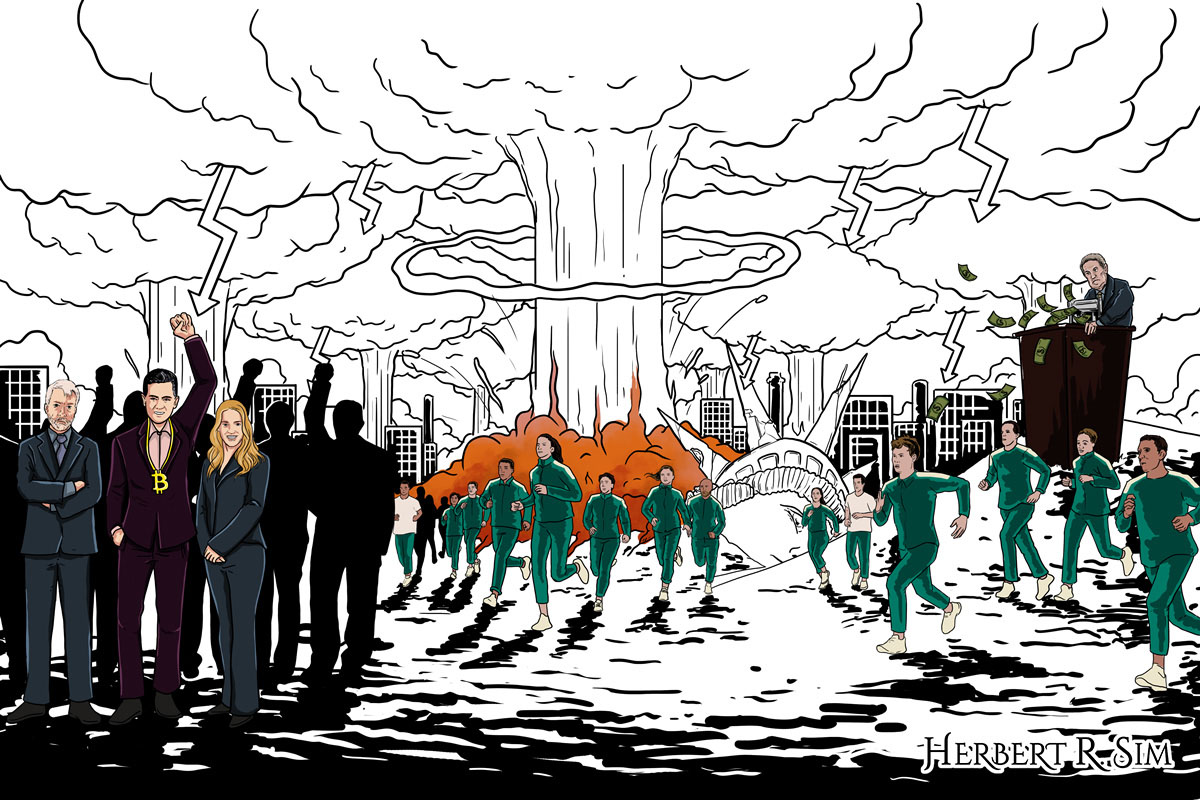 Above is the work-in-progress, coloring in of the artwork, if you noticed the people are wearing Netflix’s Squid Game’s costume. Moral – What is Federal Reserve’s game theory/plan?

The Fed is not the only central bank or financial policy maker to tweak interest rates when it comes to running the economy. Historically, introducing higher interest rates would mean a higher cost of borrowing for businesses, removing access to cheap capital for reinvestment purposes. Also, consumers no longer have access to low interest rates for things like car purchases and mortgages, resulting in lower expenses.

According to Brett Sifling, an investment advisor for Gerber Kawasaki Wealth & Investment Management, the Fed’s aggressive rate hikes, for example, would make lower risk securities that produce yield look more attractive to investors. “This shift in liquidity is a big deal for risk-on assets, as it causes a lot of volatility and the wild price swings we’re seeing in most markets,” he noted.

The above theory on volatility, however, can be countered if central banks and governments dip their fingers into the crypto market. From the Fed’s perspective, actively purchasing cryptocurrencies would grant them not just a larger share of the crypto pie, but also grant some form of stability to the market – if they so wish. The Fed’s involvement would signal legitimacy and even fan growth, but the larger overarching result would be possessing the ability to manipulate the crypto market – just like how they can in the traditional stock market.

The Fed’s usual set of strategies could now work within the stock and crypto realms, while rapid development has made it even easier for countries to create their own digital currencies – which will augur well for those who wish to embed crypto within their monetary framework. The creation of central bank digital currencies (CBDC) will also enable central banks and financial institutions to easily convert fiat money into digital assets, and vice versa.

As of March 2022, 87 countries are already looking at issuing a CBDC, of which 9 countries – including Nigeria, the Bahamas and the members of the Eastern Carribean Union – have launched theirs. CBDCs are essentially the digital version of a country’s fiat currency. While they differ from cryptocurrencies – CBDCs are centrally controlled by governments and traceable – they can still prove to be a viable way to purchase cryptocurrencies, based on the central banks’ own set of monetary policies.

With a sizeable chunk of the crypto market, governments can easily control and move them, whether it’s via direct involvement that includes buying and selling, or to influence market sentiments via quantitative easing or tightening. Monetary policies can be considered doubly effective since both stock and cryptocurrency markets are so closely connected.

Essentially, central banks can convert sizeable portions of their own printed money into digital currencies, before buying heavily into the crypto market. And just like in the stock market, if the prices of cryptocurrencies dive, the government can burn excess money through realised losses. Such a method can prove useful when there’s a need for calmer economic environments after a period of printing money – such as America’s trillions at the height of the pandemic. 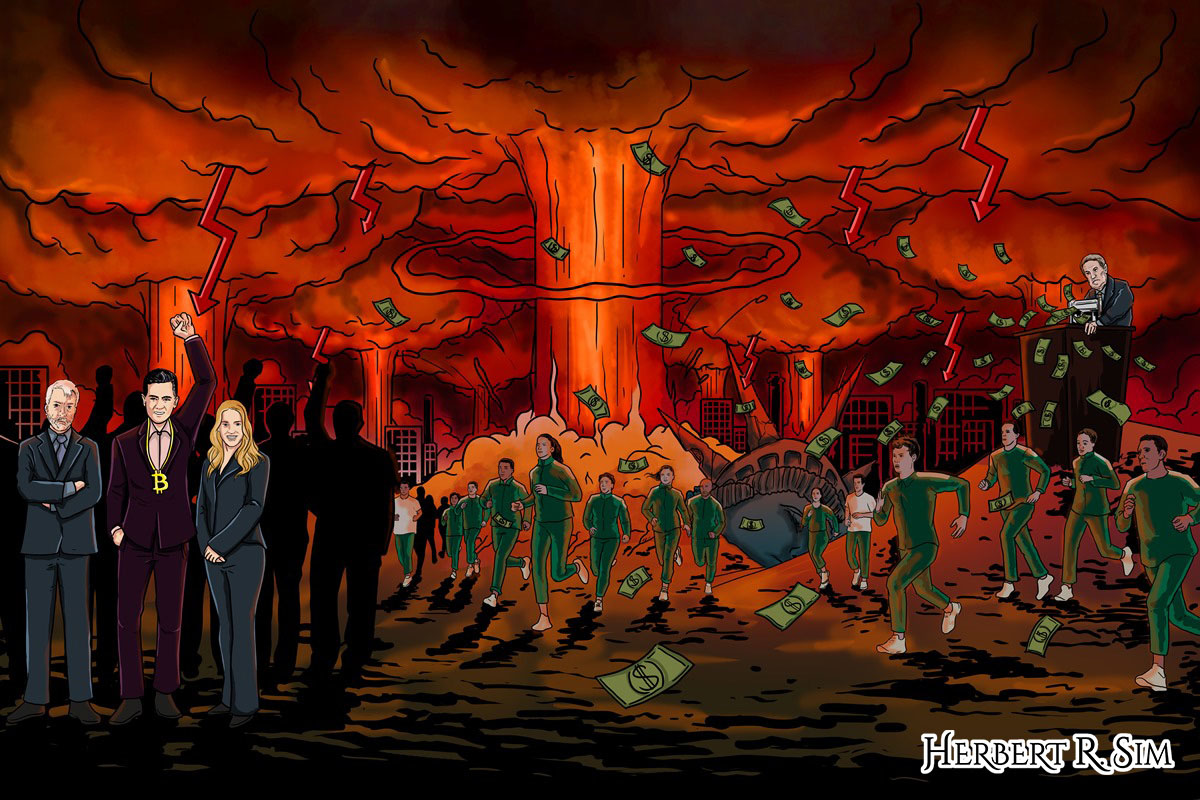 The 2 people beside The Bitcoin Man, are drawn to resemble Bitcoin Champions – Michael Saylor and Leah Wald.

How does this even work? Does the money just disappear? Yes. Essentially, the stock and crypto market is unlike the betting market whereby it’s a zero-sum game – where money is simply transferred from winners to losers. Rather, stocks and crypto are positive-sum games, where wealth is truly created and on the opposite end – money disappears when investors decide on a lower valuation. The price of a stock or bitcoin for example, would simply fall to a point where average investor is willing to hold it.

And since the value of a stock is usually determined by investor confidence and swayed by news and overall sentiments, the onus is on the investor to understand this concept. They ought to know that their holding power are key to seeing the value of their holdings grow, that if they stand firm against fear, doubt and uncertainty, the stock and crypto market would inevitably overcome the current doldrums.

To be in control

Once the Fed and global central banks understand how they can get into crypto markets and employ monetary policies to moderate their respective economies, it could drastically alter how the world sees crypto. Positively, of course.

By weaving crypto into the central bank’s web of monetary tactics and policies, economic plays by governments – regardless of macroeconomic movements or black swan events – would become even more robust and effective.

At the same time, huge waves of crypto accumulation by governments and institutions will only mean one thing – that the market can only go up, and that the entire crypto market cap will burgeon.

Better yet, if more investors realise that both crypto and stock prices are determined by investor perception, then surely the method of “HODL-ing” could bring significant value to one’s portfolio – especially in a climate where crypto gets even more normalised. The Fed’s entry will only add to the conversation that crypto is here to stay, at the same time consolidating its position and power at the top of the global monetary food chain.