Counter Economics and The State: Power Transfers and Why Bitcoin Is Here To Stay 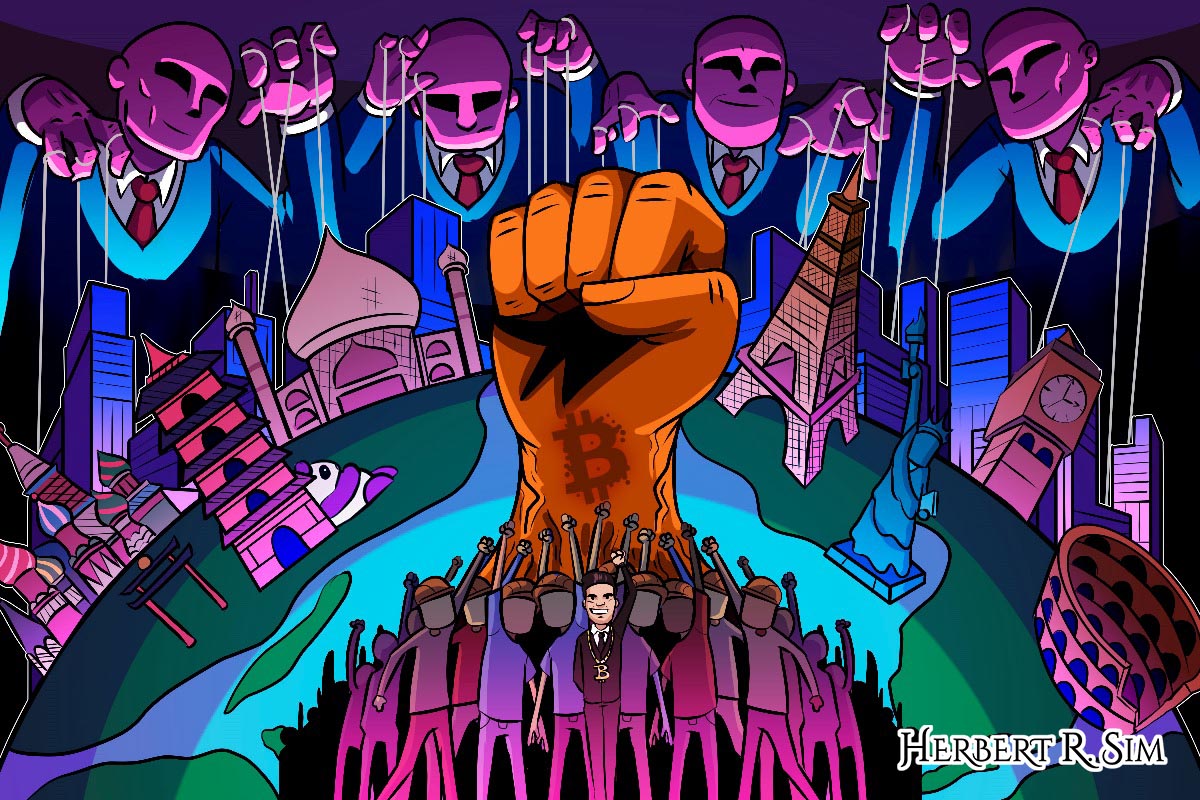 My latest illustration showcasing our modern day society, with the normal people workers coming together in a one-united revolution, with Bitcoin revamping the monetary system.

The modern day’s take on cryptocurrencies seem to circle back to two words – Bitcoin and decentralisation. The former has charmed privacy proponents, divided nations and has even been labelled as a disease.

The latter, on the other hand, is simply dismissed by some as a concept that may seem revolutionary but too naïve and impractical as a ruling concept – or worse, a stab in the back to the current establishment as well as the mainstream financial ecosystem.

Dig deeper and you’ll uncover why, like a game of charades, that Bitcoin’s mission statement has been lost in translation, too often viewed from a conventional lens by so-called experts and too often portrayed by retail folks as simply an investment scheme that could land you a “lambo”.

Contrary to popular misguided belief, Bitcoin was not created to launch the 1.7 trillion dollar industry that cryptocurrencies have become.

Rather, Bitcoin was designed to disrupt how financial institutions and electronic payments worked. It was created to enable anonymous transactions between two willing parties and to not rely on the trust based model – essentially dismantling third parties from the equation and putting the power back into an ordinary person’s hand.

This transfer of power from the banks to the people, or from a macro perspective, from the government to the individual, is largely a system that was agreeable with the cypherpunk movement and a shining example of counter-establishment economics (short for Counter-Economics, and/or also referred to as Counter-Politics) at play. 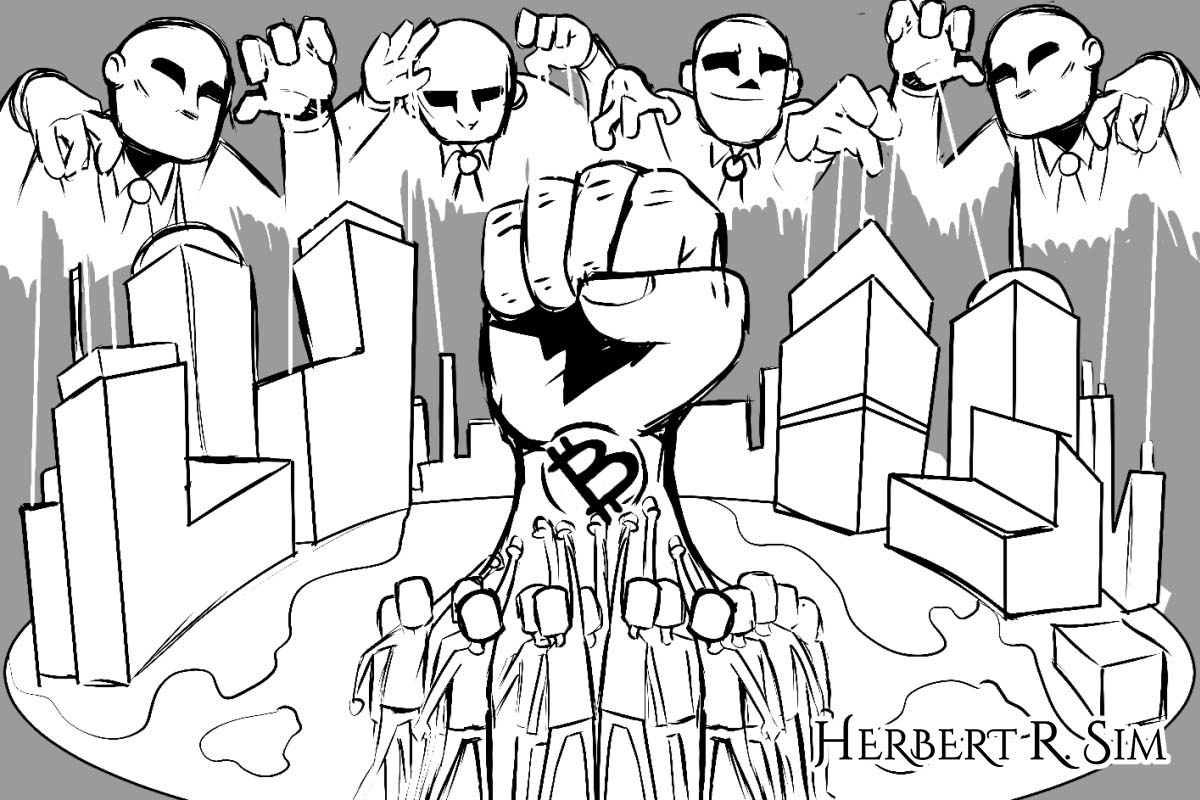 Above is the initial sketch, where I was conceptualizing how to best showcase what ‘Counter-Economics’ is exactly.

The cypherpunk movement had humble beginnings. It really kicked-off as a gathering of like-minded people who bonded over cryptography and programming dilemmas.

It was a festival of the smartest minds who had tea (or coffee) while performing ciphers – a technique of performing encryption and decryption to transform a message and conceal its meaning.
The gathering soon developed into a now famous mailing list for members to exchange thoughts and ideas, to propose solutions and to probe with questions.

One thing’s for sure, the cypherpunks value privacy and personal liberty more than anything else, and they are known to champion decentralisation and anonymity.

This fell perfectly with the narrative of counter-economics, which essentially means the carrying out of any non-violent economic activity without the state’s knowledge. Agorists, people who practise Agorism and champion the ideals of counter-economics, would find themselves charmed by the eventual discovery of Bitcoin and its intrinsic ideals – another avenue for them to express the type of freedom which they truly seek.

It is no surprise then that Bitcoin’s famous whitepaper was also dropped within the cypherpunk mailing list, to be consumed by the members who would take to Satoshi’s P2P cash system.
Bitcoin is a revolutionary idea that could be scalable and adopted by the masses – where if executed properly, could finally render a tangible transfer of power.

With any form of power transfer, there is bound to be a struggle.

For so long, governments and states have largely been the sole decision-makers, in various aspects including economics and finance.

The threat of a power transfer from them to the masses, enabled by the decentralised ethos and heartbeat of concepts like Bitcoin, will surely raise an eyebrow or two in the ivory towers who have not expected such an intriguing distraction.

Furthermore, it is human nature for the likes of retail investors and individuals to seek an alternative that would sound and appear better, one that would seem to increase one’s personal value (or the protection of) as well as take membership in a collective movement against the “tyrannical” powers of banks and states.

The Gamestop and AMC short squeezes can be seen as examples of such a prolific siege mentality, which in the investors’ case – against hedge funds – one of us against them, of David vs Goliath.

Regardless, the feel-good story of Bitcoin feels almost like an antithesis of what it was set out to be, of what cypherpunks themselves were striving for. It’s no longer the anarchic spirit that some would like to determine and propagate, but rather, as what Bitcoin has always set out to be, a peaceful demonstration of what a thoughtful transfer of power looks like.

Demand for Bitcoin and cryptocurrencies will continue to soar and it has become inevitable that they will be here to stay. It’s just a matter of whether this power struggle would turn into a war on crypto by states or from the other spectrum, a simmering feud against governments by the masses. 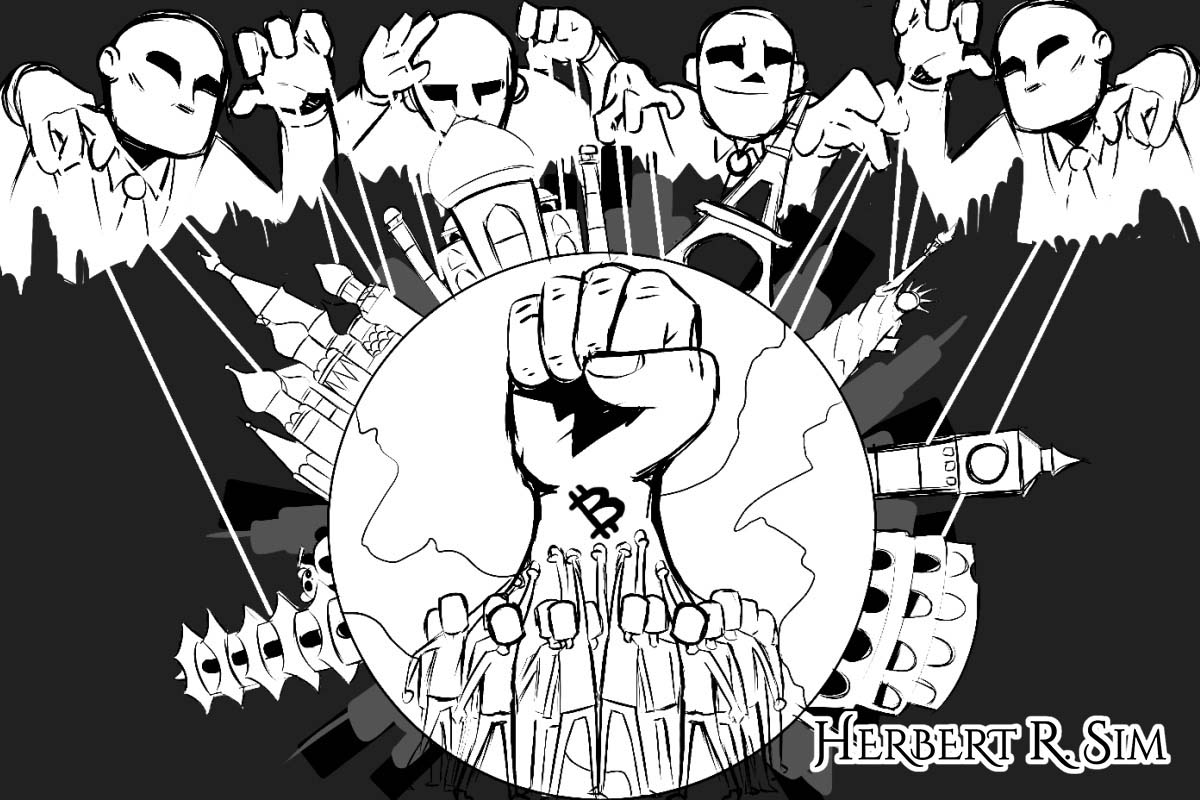 We have to understand that Bitcoin’s agenda is to enable decentralisation via a non-violent manner, but what if states that are against such power transfers acquire and stack Bitcoin? What would this scenario represent?

One plausible result could be that states would still be able to hold onto their power and maintain status quo – in terms of having a centralised system that is – but with a decentralised undercurrent running through their financial systems.

States with large stashes of Bitcoin and other cryptocurrencies would inevitably continue to reign with their sheer volume, carrying out initiatives and programs that would still benefit them but this time, without the need for a third party trust based model.

When states possess Bitcoin and leverage them for transactions, there is simply no reason for the “trust” function to be present anymore. In fact, the state has become a willing party of a transaction between themselves and the people, and this, ultimately, would be a power transfer that Satoshi would be proud of.

Above is a GIF to show the process, the hours of Work-In-Progress of the sketching and coloring in of the art.

The idea of a compromise

The effects of a state embracing Bitcoin (or seemingly so) could be a far-ranging one.

We’re still in the early stages of attempting to break mainstream financial hegemony, a certain way of working still held strongly by existing powerbrokers and influential leaders that are opposed to the ideals of Bitcoin and counter economics.

However, once states continue to acquire Bitcoin, it could be interpreted by some as a mark of confidence and assurance, encouraging more people to adopt and understand cryptocurrencies themselves.

With greater adoption and assurance, the sense of fear, doubt and uncertainty of crypto assets will be reduced, in turn contributing to the gradual easing of cryptocurrency within mainstream society, within our daily activities such as digital payments and transactions.

What Satoshi has created, the ideals that Bitcoin have attempted to perpetuate, would then seem to materialise and finally, be set in motion.

Then, the transfer of power to the masses might well and truly begin.