In my latest illustration, I feature the people fighting a hopeless battle about the ‘big bad’ Fiat Wolf, a representation of the central banks. Then comes a hero with the legendary ‘Blade of Bitcoin‘.

To say 2020 has been a dismal year is understating things. Beginning with the COVID-19 pandemic that made the world come to a screeching halt, natural disasters— locust swarms, murder hornets, typhoon, floods, hurricanes, earthquakes—of biblical proportion made its way into headlines and marked the calendar with chilling regularity. 2020 will also be forever marked for the global social unrests that have rocked the foundations of civilisation itself.

The only way this year could get any better—nay, survive—would be a Great Reset, said Managing Director of the International Monetary Fund (IMF) Kristalina Georgieva. Addressing the World Economic Forum (WEF), Kristalina said many of the global economies have shrunk, income inequality would increase and many more people will sink below the poverty line. The IMF has seen massive injections of fiscal stimulus to help countries recover and stipulated a return to a smarter, greener and fairer world. This prompted a website, The Great Re_Set, to detail how corporations of the world could help build a new future.

Linking her statement to the fact that the IMF was born out of Bretton Woods—where 730 delegates from 44 Allied nations came together to create a unified monetary system based on the United States (US) dollar—speculators have pointed to a new economic world order.

Macroeconomist Raoul Paul warned via twitter of the “biggest overhaul of the global financial system since Bretton Woods”. In an interview with the Stansberry Research, Bank of the Future founder Simon Dixon offered a look at what that would look like. The future economy will be propped up by non-debt-based money created by the Central Bank with a non-inflationary mechanism for de-leveraging the economy.

“There will be a re-packaging of global debt and toxic assets,” he continued. The current economy is over leveraged. The financial system is over leveraged. Individuals are over leveraged with maxed out credit cards, student loans and all sorts of debts. Corporations that use the debt capital market to push up the stock market and governments that are moving towards the modern monetary theory-style economy where everything is funded by quantitative-easing (QE) stimulus will stop. The first place that will be impacted will be the real estate market, said Simon.

“The real estate market is really the mechanism by which private banks create digital currency every time they issue a loan. If the banks haven’t sold enough of the toxic assets like they did during the last financial crisis then it exposes the banks’ balance sheets for what they are,” explained Simon.

Here you can see that I decided to revise my earlier sketch, changing the face of the fiat wolf, to make it more ferocious looking. I made it in GIF, so you can see the hardwork and intricate detailing of the illustration. If you like it, appreciate if you can share this to your network.

This scenario is already happening since the mid of this year. Despite government and Central Bank stimuli, defaults and delinquencies continue to rise reported Seeking Alpha. Even as governments direct funds to prop up companies, many businesses continue to fall and unemployment rise.

Banks—traditionally seen as “too big to fail”—may face a scenario where they will no longer be bailed out. National banks may make a play on Central Bank Digital Currencies (CBDC) where three scenarios could take place, say Quartz. 1. Current model, where users go through a commercial intermediary such as a bank that keeps CBDC at the Central Bank; 2. Users hold CBDC directly and the Central Bank holds the balance sheets; and 3. Users hold CBDC directly but go through commercial entities such as banks, digital banks or merchants that provide payments services. For example, using Grab to pay for your food orders. Banks and financial institutions would be forced to pivot to become financial technology companies that offer “banking-as-a-service”, said Toptal.

The concern then shifts to personal freedoms and privacy. When Central Banks issue money to citizens, they are gifted with data about their behaviour. State-backed digital money could come with certain conditions that allow governments to push through with draconian policies, noted The Financial Times.

The scenario that could save us, according to Cointelegraph is one based on cryptocurrency. Even as governments around the world try to put its own Central Bank Digital Currency (CBDC) on a distributed ledger so they have more control, crypto fans want to put money in their own hands. Governments want to centralise currency but crypto cries for a decentralised economy. The article warns CBDC is not really digital money, it is more like a credit card that lets you access monies in the bank. Except, this time, it is not propped up by debts, added Simon.

A currency reset is neither new nor is it scary, said The Daily Reckoning Australia. Using the analogy of Monopoly, the article said: “When you play Monopoly with your family, you don’t kick off where the last game ended. It is reset back to zero each time. Otherwise the losers would refuse to play.” The Great Reset will also allow people a level-playing field. American economist James Kenneth Galbraith is a supporter of such “debt jubilees”, a throwback to the ancient eras of Babylon where the kingdom set up periodic debt jubilees. These jubilees would often follow the ascension of a new king to the throne where the monarch would forgive debts and give the kingdom a fresh financial start.

These “debt jubilees” would come from the Central Banks, reiterated Simon. With the Central Bank taking over private banks, financial institutions would need to pivot to become financial technology (fintech) businesses, projected Simon. The API key created by the Central Bank will have an algorithmic monetary policy and the bank-slash-fintech will build the technology on top of it to replace the role of banks today.

The reset may upset the global world order, found this paper. If more people distrust the American dollar, which is currently pegged to the world reserves, we may see a shift to Asia, in particular, China.

More importantly, the Great Reset must come with better outcomes for the planet, its people and it must allow people access to technology, said Kristalina. The world needs to take the opportunity to distribute wealth fairly and governments must ensure private sector companies do not take advantage of the level playing field, said The WEF. 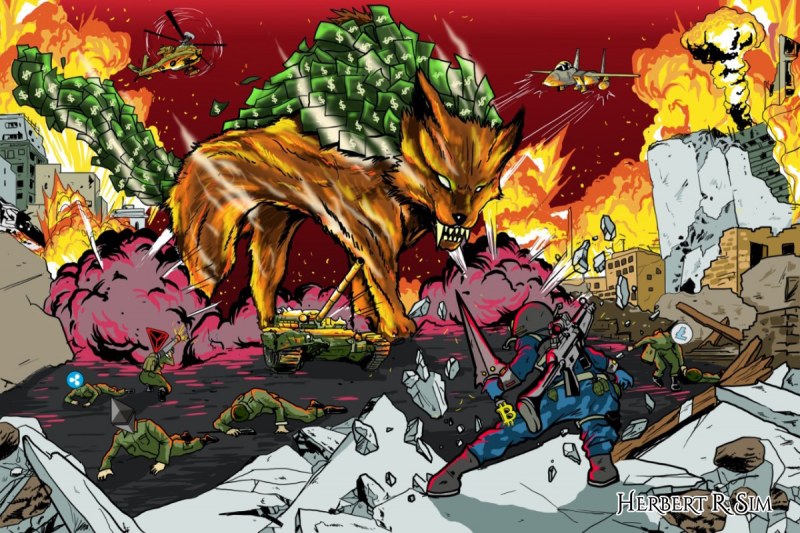 In my final illustration, you can see that the people and army fighting the Fiat Wolf are representations of the current top cryptocurrencies – Ethereum, TRON, Ripple, Litecoin, and of course BITCOIN.