Central Banks and Cryptocurrencies: A Shift in Balance? 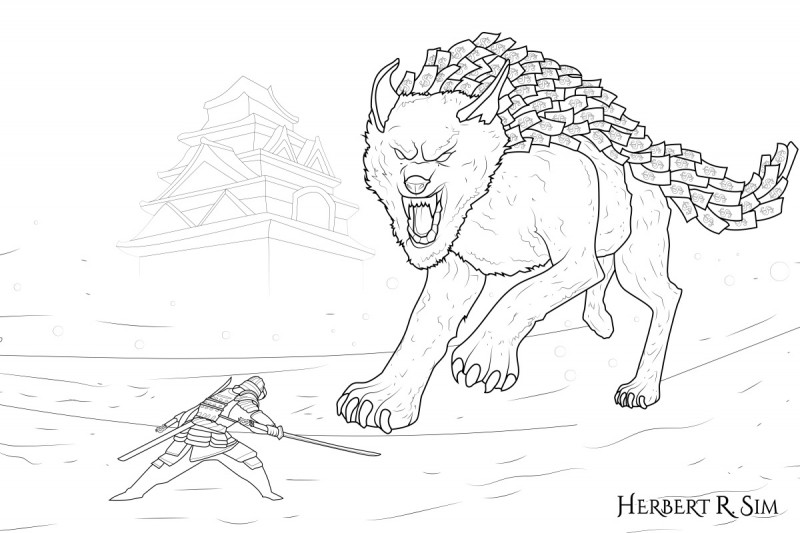 Following up from my earlier article & illustration “Who is Satoshi Nakamoto?“, here in my latest illustration, I showcase the legendary founder of Bitcoin, in battle against the Big Bad Fiat Wolf, that represents that of Central Banks.

The value of bitcoin has seen notable increases in recent months as interest in the uses and potential of cryptocurrencies spreads like wildfire. However, central banks and other government authorities in some parts of the world are sceptical or unconvinced of the potential that bitcoin holds, with some enacting policies against cryptocurrencies.

In December last year, China’s central bank moved to restrict its banks from using bitcoin as a currency, citing concerns about currency and financial stability, and law enforcement. It stopped short, however, of issuing an outright ban.

In South America, Bolivia’s central bank in June 2014 banned any currency or coins that were not either issued by or regulated through the government, a move essentially made in response to the growing popularity of cryptocurrencies.

That said, it is not all doom and gloom for cryptocurrencies. There are other institutions and individuals in the establishment related to fiat currencies, monetary policymaking and financial governance that see potential in cryptocurrencies. Could this be a shift in balance in the financial world as we know it?

When financial turmoil hit certain part of Europe this year – the latest in a series of crises which also occurred in 2008 and 2011 – it became clear once again that government monetary policies and regulations were imperfect. For Europeans and the Cypriots in particular, the ongoing financial crisis has been a stark reminder that governments and banks can fail — and that people’s life savings can be placed at great risk and even disappear because of it.

Consequently, as an alternative to withdrawing their money out of the bank and keeping it as cash, it appears that those affected, particularly in Cyprus, may be taking a more radical approach to protecting their money and removing it from the control of financial institutions, both government and corporate.

When an initial bailout package for Cyprus was announced on March 16, all Cypriot bank deposits were at risk. A few days later – and this is likely connected – there was a surge in the value of bitcoin. From the point of the bailout announcement, the price of bitcoin rose from about USD$48 a bitcoin to about USD$75, a 1.6-fold rise. This was accompanied by an overall increase in the volumes of trades in bitcoin as well. 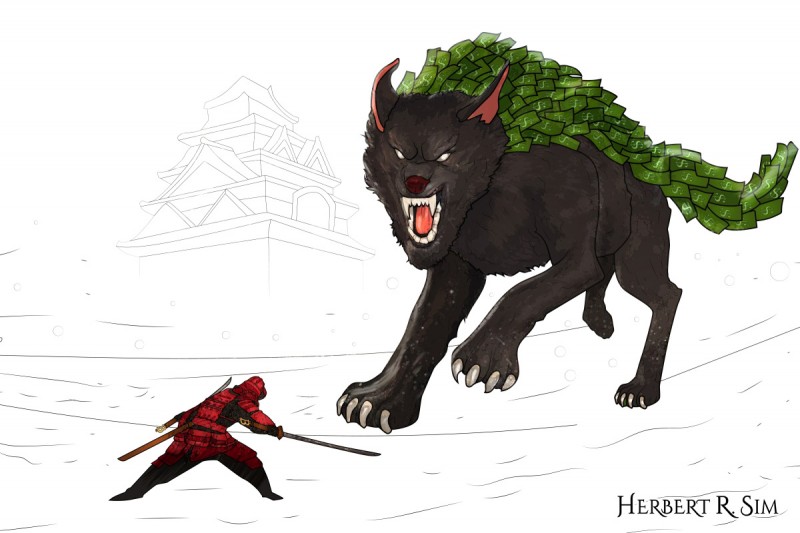 The illustration is a continuum from my previous illustration, Satoshi Nakamoto as a Samurai warrior, wielding the legendary Bitcoin Daishō, (matched pair of traditionally made Japanese swords).

There are observations that the increased interest in bitcoin from the public and media, coupled with the ongoing tarnishing in the reputation of “mainstream” financial institutions, has helped to enhance the credibility of the cryptocurrency. Ultimately, the reputational boost that bitcoins is undergoing reflects the growing public distrust in central political and financial institutions.

It is of great worry that the lessons of the 2008/09 Global Financial Crisis seem to have been conveniently overlooked by those running the finance industry. In this context, the shift towards decentralised instruments of finance and governance – i.e. cryptocurrencies – is an obvious one.

In addition to the masses of people, distinguished experts from the financial world are starting to sit up and pay attention to bitcoin. No less than America’s top central banker has given his cautious blessing to bitcoin, the cryptocurrency that requires no central bank. While US Federal Reserve Chairman Ben Bernanke said in a letter to the US Congress that the Fed “does not necessarily have authority to directly supervise or regulate these innovations or the entities that provide them to the market”, he acknowledged the view that bitcoin and other cryptocurrencies “may hold long-term promise, particularly if the innovations promote a faster, more secure and more efficient payment system.”

Bernanke is not alone in his favourable view of bitcoin. David Andolfatto, an economist and Vice President of the Federal Reserve Bank of St. Louis, one of the regional Reserve Banks that makes up the US central bank, called bitcoin “a stroke of genius”. Andolfatto thinks the existence of bitcoin poses a threat to central banks that is very good as it will discipline the Fed and central banks in other parts of the world to continue to formulate responsible policies. Failing which, people could switch to something else, as was the case in Cyprus mentioned above.

Across the Atlantic, experts from European financial institutions also say that bitcoin should not be dismissed. In a speech delivered in March this year, Yves Mersch, Member of the Executive Board of the European Central Bank stressed that virtual currencies are an interesting phenomenon that should not be ignored despite their relatively small impact on the economy at present. He said this in relation to retail payments and interchange fees. Mersch noted that although they are still not close to being described as ‘mainstream’, cryptocurrencies have gained quite a following and are getting popular to the extent that regulators around the world are starting to take notice.

The shift in balance caused by bitcoin and cryptocurrencies across the financial world is indeed one that central banks, governments, businesses and the man-on-the-street would do well to take note of. 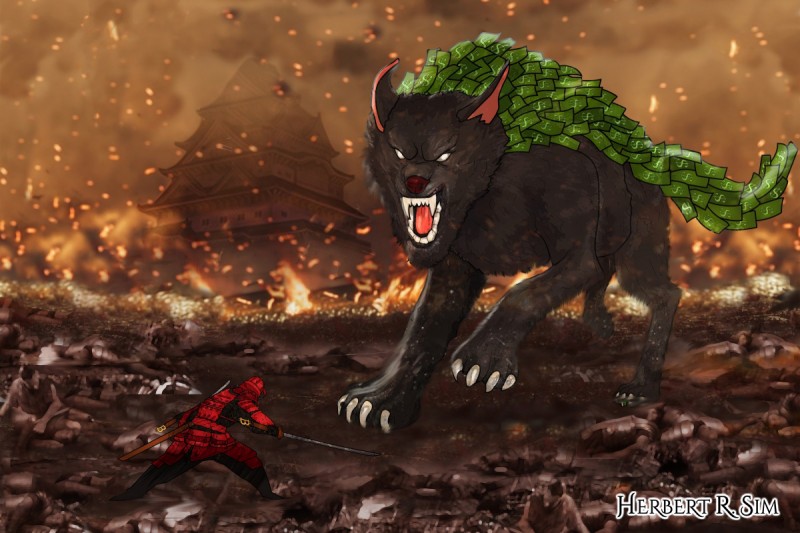 From the final illustration in full color, you can see the detailing of the background, of the chaotic post-battlefield. Satoshi Nakamoto is the last man standing against the Fiat Wolf, with dead bodies strewn all over the ground, and flames engulfing in the backdrop.