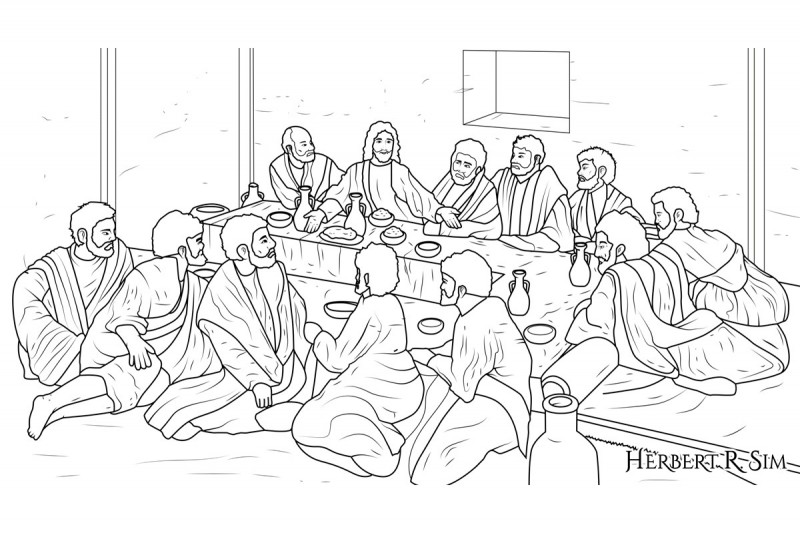 Above, my attempt to depict how the actual ‘Last Supper’ should look like, especially in terms of the Greek/Roman style banquet room seating arrangement, called the ‘triclinium’. John is seating at Jesus’ right side, and Judas seating at Jesus’ left side, looking at Jesus with eyes of betrayal.

Ever since, chancing on Allan McGregor from Scotland’s interesting information about The Last Supper by Leonardo da Vinci (As per below), I embarked on depicting how the actual ‘Last Supper’ should look like, and went deeper researching on getting it right, as accurate as possible…

According to the traditions of a formal symposium style banquet, the common ritual of a special feast in the 1st century AD, the banqueters gathered around a U-shaped table or reclined on a U-shaped platform.

I was surprised that, in his otherwise excellent article refuting Dan Brown’s Da Vinci Code nonsense, Russell Grigg did not wield the Sword of Spirit a deal more sharply when commenting on Leonardo’s famous fresco, The Last Supper.

Let’s be very clear here, arguments over the finer aspects of Leonardo Da Vinci’s interpretation of events are theologically redundant because this painting bears absolutely no relation to the event it purports to depict, as described in the Gospels. In fact, just about every aspect of its composition is entirely wrong, so we needn’t get too heated about its supposed hidden meanings and messages.

The event taking place is a Renaissance artist’s impression based on the cultural imperatives of his own day—more than fourteen centuries after the event.

Whether Leonardo was a closet Gnostic or a joss stick is immaterial; what he most definitely was not is Jewish. That much is abundantly clear from those details of his painting that are not in dispute. However, Jesus and His disciples were Jewish and the event depicted is a Passover Seder, in virtually all aspects of which Leonardo is in considerable error.

First of all, the table is linear and not the three-sided triclinium in popular use in the culture of that day. As the Master of ceremonies, Jesus would have sat near one end, with John and Judas Iscariot on either hand, and not in the centre as shown by Leonardo—besides which, John would have had great difficulty in whispering across to Peter as he did, at the opposite end of a conventional table.

Secondly, the disciples are sitting upright, when the Bible makes clear that they reclined—not only the correct custom when partaking a Passover meal, but ample explanation of the ease with which Jesus washed their feet and the ability of the apostle John simply to lean over and recline in Jesus’ bosom.

Thirdly, Passover is celebrated after sunset on a full moon, whereas the painting unashamedly shows daylight outside the windows, suggesting an Italian luncheon rather than a sacred observance conducted in Jerusalem and held in accordance with God’s holy commandment.

Then there is the question of the menu—depicted by Leonardo as crusty loaves and fishes. That little quasi-religious touch may have gone down well in a monk’s refectory but would have appalled the real participants who solemnly partook of unleavened bread (Matzot) and lamb, to say nothing of four glasses of wine; the third glass of which—the Redemption Cup—is what we now use to commemorate the abbreviated sacrament we call the Lord’s Supper.

So, let’s summarize. Wrong table, wrong time, wrong seating arrangement, wrong menu. Indeed, I could go on, but with so much else that is patently in error with this negligent religious caricature, we do the Bible a profound disservice in even contemplating discussing the accuracy of the guest list. This Greek/Roman style banquet room was called a triclinium, and the banqueters reclined on couches which radiated out from the banquet table.

The host always occupied the Lectus imus, the table to the left of the inverted U. This is where Bible scholars believe Jesus placed Himself at the Last Supper where He took the position of the Host. According to Scripture the arrangement would have been:

Slaves stood to eat while freeborn men reclined. For Jews in the 1st century AD it was the custom to eat reclining as a free-born man by supporting oneself with the left arm and eating with the right hand.

According to the formal plan of a banquet after the seats on either side of the host, the higher positions of rank increased to the left of the host. The table to the farthest left of the host, the Lectus suma, held the most important invited guests who had a good vantage point for conversing with the host who was reclining on his left arm.

There were also two stools at the end of each arm of the U where the servants sat who assisted in the ritual hand washing during the meal and in serving and passing the food and the four communal wine cups.

Most scholars think Peter was placed in position of the most honored guest at the far left of the Lectus summa, but this theory contradicts Jesus’ teaching on humility and service, the last shall come first and the first last (see Matthew 19:30; 20:16; Mark 10:31; Luke 13:30; and a similar teaching in Luke 14:8-9), which was a teaching Jesus may have been demonstrating visually that night by placing John, the youngest and therefore the least of the Apostles, in the place of honor on His right (John 13:23-25).

Jesus also illustrated the teaching of “the first shall come last” in His washing of the Apostles’ feet, taking on the role of a servant Himself, to demonstrate that they must be servants who serve with love and humility as His emissaries of the New Covenant to the world (John 13:12-16).

It would have been more in line with Jesus teaching that night if Peter, the foremost of the Apostles, was occupying the small seat of the servant at the end of the table, giving him direct access to ask John (John 13:23-24) “Who is it who will betray the Master”? It may be a tradition which was inaugurated at this sacred meal that one of the oldest titles for the Bishop of Rome which was applied to Peter and all his successors is “Servant of the servants of Christ.” 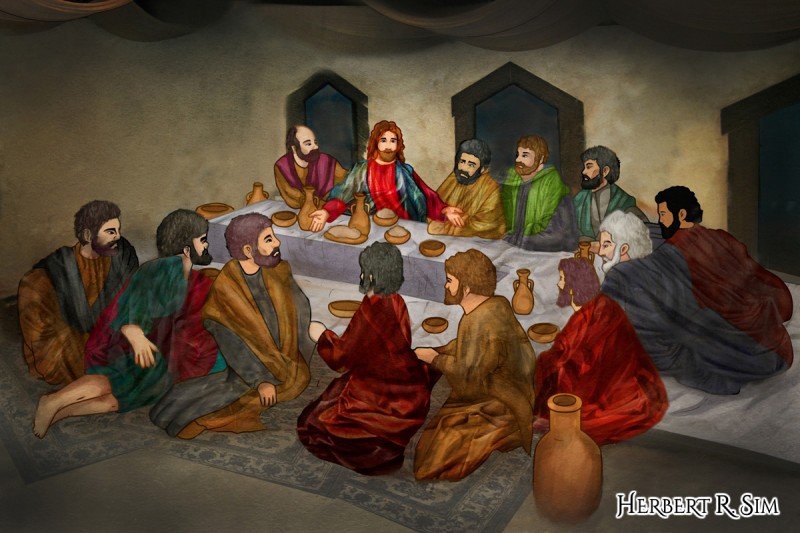 The illustration focuses on Jesus, seating at the seat of the host, with arms out-stretched, and even though it is the last supper, which is supposed to be dark and gloomy, somehow Jesus’ light shines on. You’ll notice the glow emanating from Him.