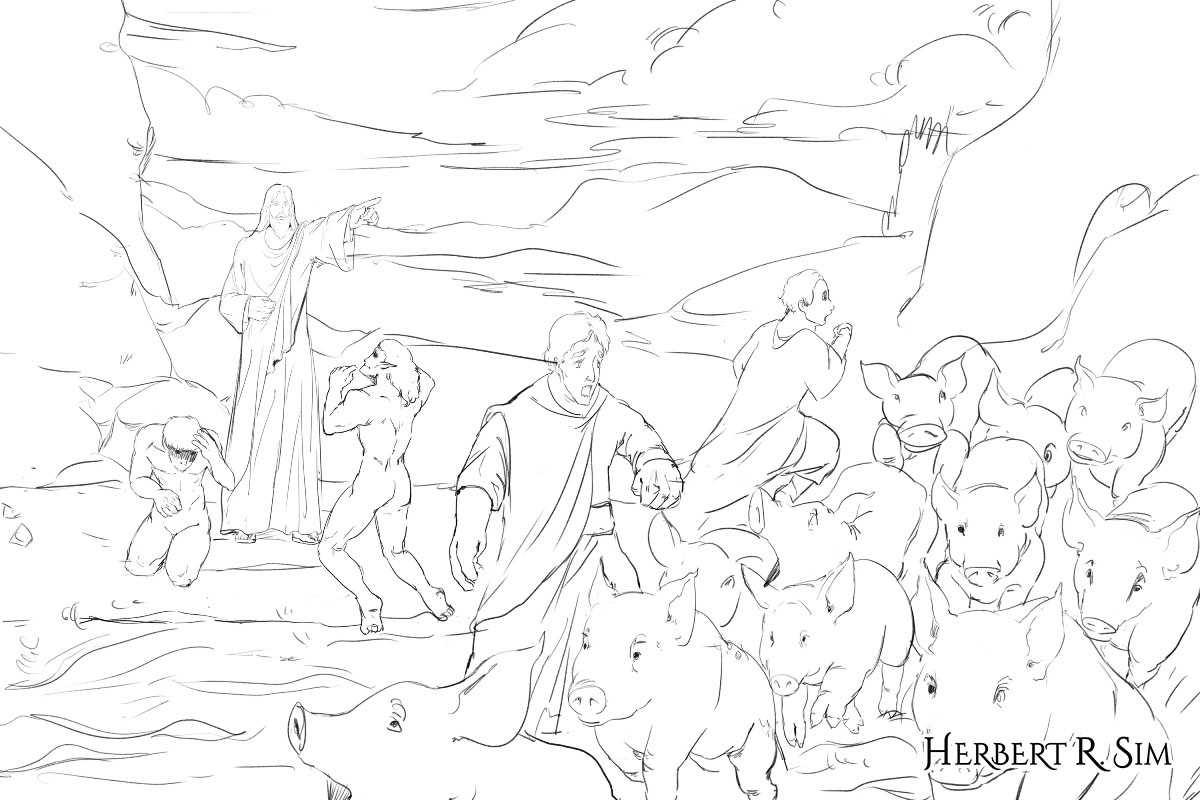 Above is my sketch of Jesus Restoring Two Demon-Possessed Men, casting the demons into the pigs, which rushed into the waters drowning themselves after. And the horrified looks of the farmers who breed the pigs, who after fled and reported it to the city.

This is among my favorite miracles of Jesus, showing that He is not subservient to Satan, but much stronger than the devil. In fact the demons know who Jesus is – they call him the “Son of God”.

They know that he has absolute power over them and can choose either to cast them out or not, and to decide where they go. There’s no negotiation here as if they were equal partners at the negotiating table; Jesus is superior, and they know it. At the name of Jesus every knee should bow, in heaven and on earth and under the earth (Philippians 2:10)

They know that in the future they are appointed for final torment. They wonder if Jesus has come to start that final judgment. They say, “Have you come here to torment us before the time?”

The fact that there was a herd of pigs nearby shows that we are in Gentile territory, since the Jews regarded pigs as unclean, and did not raise them for food or anything (Deuteronomy 14:8). In other words, this is one of those rare moments when Jesus is reaching out into the Gentile world as a pointer to the fact that his ministry is going to result in a global mission to all the peoples of the world (Matthew 28:19–20).

And the most beautiful part was Jesus traverse across the waters to just find the two gentile demon-possessed men (Matthew 8:23-27), whom I believe Jesus heard their cry and torment, and came just to set them free.

We would suppose that the sight of the freeing the demon-possessed men would have filled the people with joy and gratitude to Jesus. But, quite the contrary, they didn’t seem the least bit interested in finding out who He was, or why He had come to their town. They wanted nothing to do with Him and all the people of the region of Gerasa began to plead with Jesus to leave them.

The unholy people had come face-to-face with the holy God and they were terrified. Sinners who know they are in the presence of Holiness, which results in fear.

God has shown His power and love in our lives many times, yet there are times when we still respond by turning our hearts away from Him.

God sent His only Son Jesus, to die on the cross to release us from our sins and our fears, with His blood cleansing us making us holy to be able to enter heaven. Jesus is our hope and our salvation. Amen. 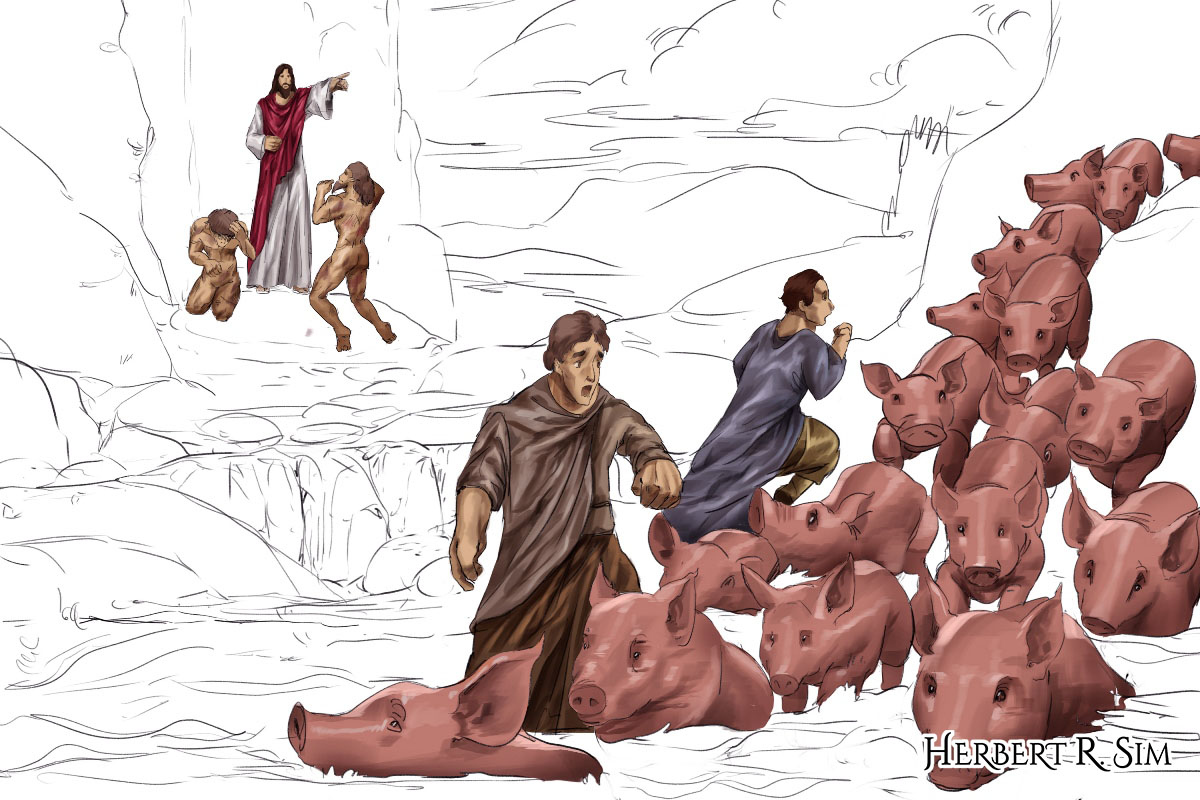 In my work-in-progress coloring, you can see that I adjusted on the distance and contrasting, to showcase the pigs running down a steep place into the sea. You can also see the demon possessed men’s bodies were marked with injuries from being tormented by the possession.

28 When He had come to the other side, to the country of the [a]Gergesenes, there met Him two demon-possessed men, coming out of the tombs, exceedingly fierce, so that no one could pass that way. 29 And suddenly they cried out, saying, “What have we to do with You, Jesus, You Son of God? Have You come here to torment us before the time?”

30 Now a good way off from them there was a herd of many swine feeding. 31 So the demons begged Him, saying, “If You cast us out, [b]permit us to go away into the herd of swine.”

32 And He said to them, “Go.” So when they had come out, they went into the herd of swine. And suddenly the whole herd of swine ran violently down the steep place into the sea, and perished in the water.

33 Then those who kept them fled; and they went away into the city and told everything, including what had happened to the demon-possessed men.34 And behold, the whole city came out to meet Jesus. And when they saw Him, they begged Him to depart from their region. 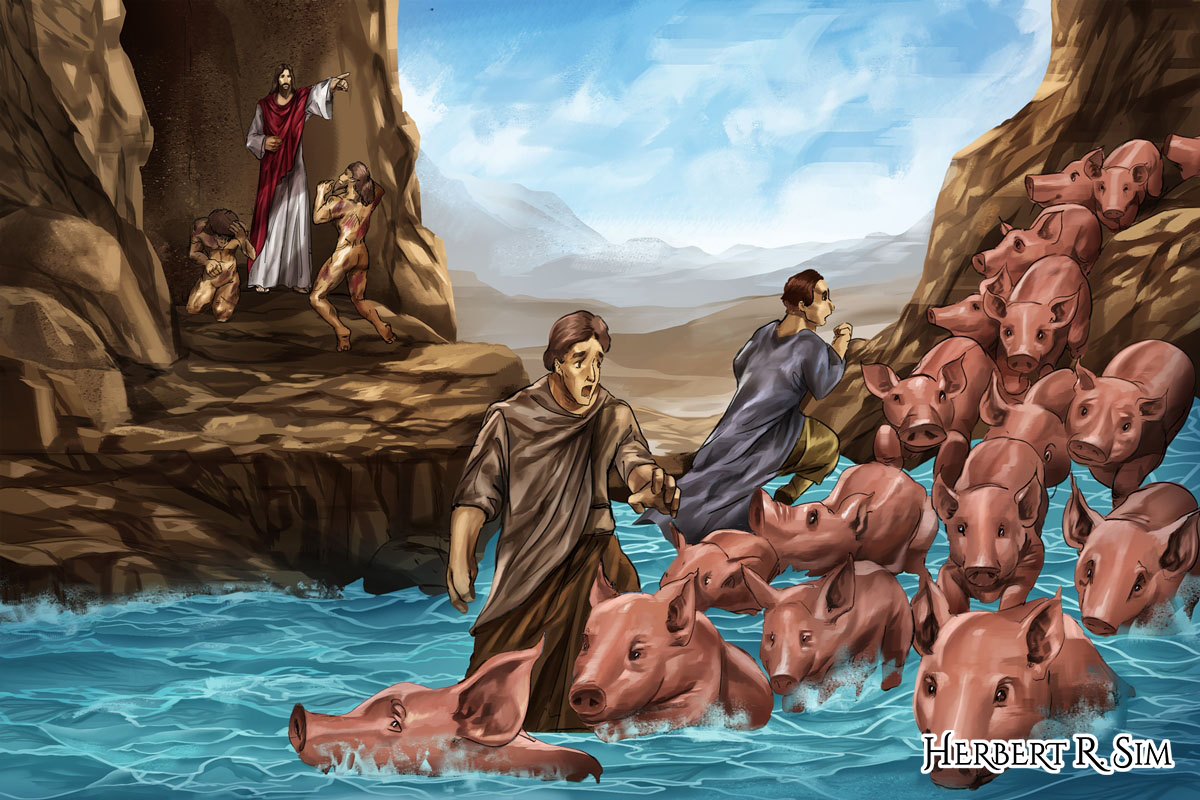 I was torn between using “Jehovah El-Ashiyb (The LORD My Restorer)” and “Son of God” for the title of the art, both of importance to highlight in this art. Jesus restoring the demon-possessed men, giving them their freedom back; and the demons recognizing that Jesus is the Son of God.