The Lord of Time and Space: Jesus Changes Water Into Wine 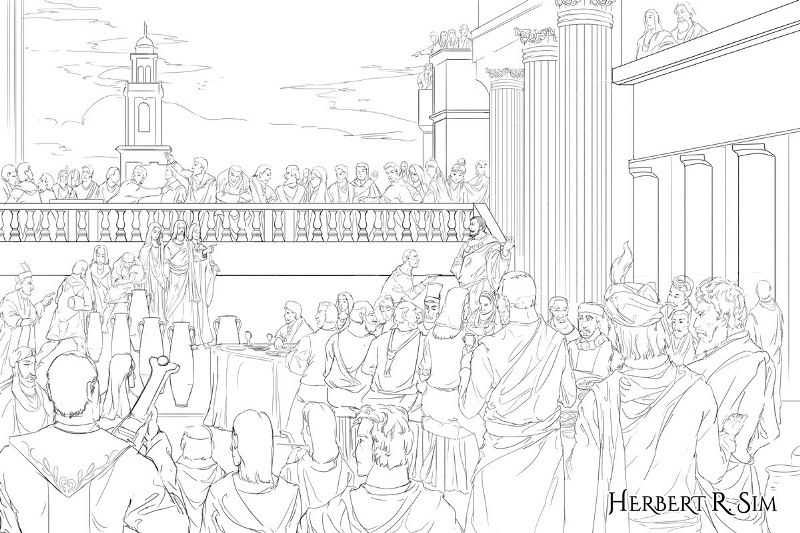 In my latest illustration, I drew inspiration from The Wedding at Cana, by Italian artist Paolo Veronese (1528–1588). I’ve made many improvisations in comparison to the current famous paintings of date e.g. ‘Marriage at Cana‘ by Giotto di Bondone, 14th century – To focus the art on JESUS instead.

I have been working on this art illustration since last year September, immediately after my illustration of Jesus resurrecting Lazarus. And I was extremely psyched when Pastor Joseph Prince shared the theme of the year – The Lord Of Time And Space, in January, which was exactly the illustration I was working on for months already on end, scheduled to publish for today, on Good Friday, commemorating the crucifixion of Jesus and his death at Calvary.

This art illustration is of my favorite miracle by Jesus, because it subtly showcases Jesus’ being the Master of Time & Space. The mastery of ‘Time & Space’ is something so mythical, and legendary, where books, comics, and even movies and TV series created with this topic.

When Jesus turned water into wine, He compressed Time, Space and Dimension.

A good bottle of quality wine takes many years to produce. First, you need to plant seeds in the ground and let the grapes grow, which takes 5–7 years.  And on futile soil, and lots of tender, loving care, watering, toiling and fertilising it. Once harvested, you will then need to extract the wine and keep it for 20–30 years for it to become good wine. At the wedding in Cana, we see how Jesus compressed time, turning water into the best wine in an instant.

This miracle is a sign to us that He’s the Lord of Time, Space and Dimension.

Man can also produce excellent wine, but it takes much time and labor. In Pastor Prince’s theme of the year 2020, he shared that as you follow God’s ways, you will see the Lord accelerating, suspending, and reversing time in your favor.

Enjoy the coloring Work-In-Progress in GIF. If you see the linear lines of the sketch itself – e.g. the path leading to Jesus, standing on an elevated platform, the focus subtly draws the viewers’ eyes towards the focus of the art, on Jesus.

On the third day a wedding took place at Cana in Galilee. Jesus’ mother was there, 2 and Jesus and his disciples had also been invited to the wedding. 3 When the wine was gone, Jesus’ mother said to him, “They have no more wine.”

5 His mother said to the servants, “Do whatever he tells you.”

6 Nearby stood six stone water jars, the kind used by the Jews for ceremonial washing, each holding from twenty to thirty gallons.[b]

7 Jesus said to the servants, “Fill the jars with water”; so they filled them to the brim.

8 Then he told them, “Now draw some out and take it to the master of the banquet.”

They did so, 9 and the master of the banquet tasted the water that had been turned into wine. He did not realize where it had come from, though the servants who had drawn the water knew. Then he called the bridegroom aside 10 and said, “Everyone brings out the choice wine first and then the cheaper wine after the guests have had too much to drink; but you have saved the best till now.”

11 What Jesus did here in Cana of Galilee was the first of the signs through which he revealed his glory; and his disciples believed in him. 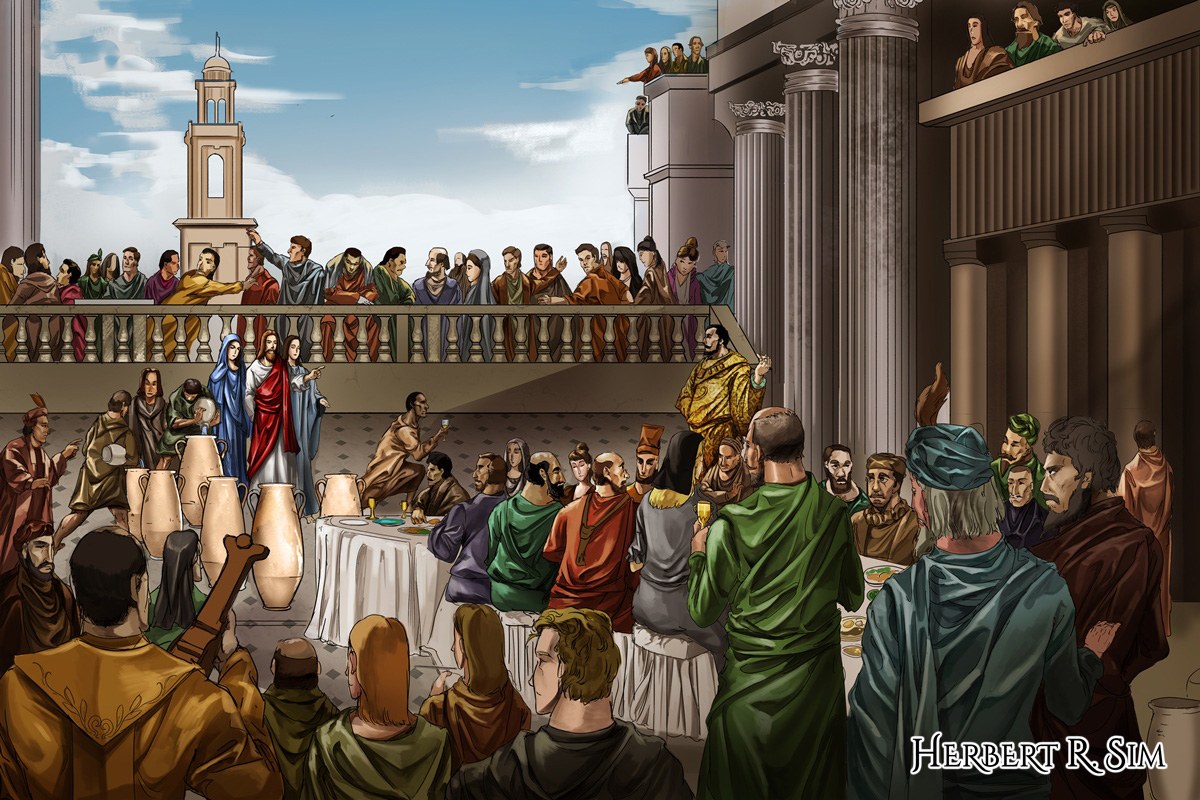 Here is my final illustration in full color, it clearly depicts the miracle, of Jesus asking the servants to pour water into the  ‘water jugs’ used for ceremonial washing; and a servant who drew some out and taking it to the master of the banquet (seen in yellow).