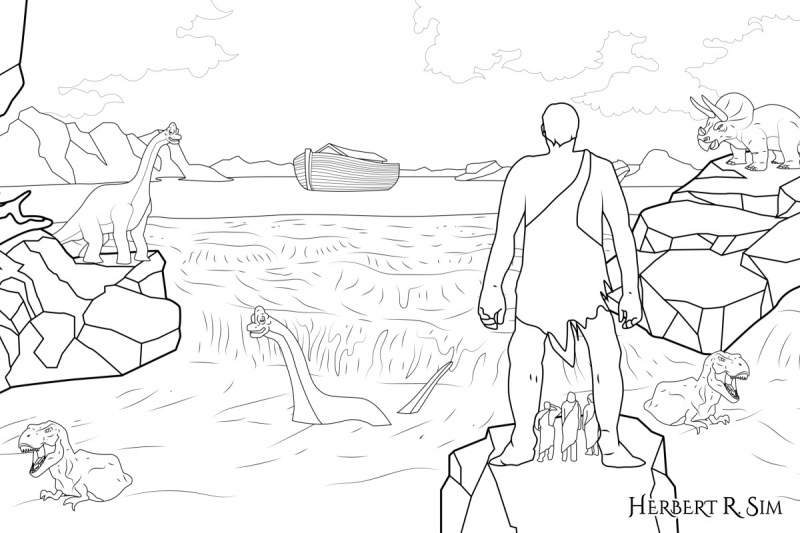 Here above, I attempt to sketch the all renown Bible story of “Noah and the Flood”. You would however notice one unique difference, that no other artist have illustrated as of yet. It includes dinosaurs, and giants a.k.a. Nephilim.

Here below is an abstract of the Chapter of Noah and the Flood from the Bible itself, to ensure that my illustration, and theory, is in-line with the Bible as closely as possible, as I attempt to illustrate it in my digital illustration.

Noah and the Flood

11 Now the earth was corrupt in God’s sight and was full of violence. 12 God saw how corrupt the earth had become, for all the people on earth had corrupted their ways. 13 So God said to Noah, “I am going to put an end to all people, for the earth is filled with violence because of them. I am surely going to destroy both them and the earth. 14 So make yourself an ark of cypress[a] wood; make rooms in it and coat it with pitch inside and out. 15 This is how you are to build it: The ark is to be three hundred cubits long, fifty cubits wide and thirty cubits high.[b] 16 Make a roof for it, leaving below the roof an opening one cubit[c] high all around.[d] Put a door in the side of the ark and make lower, middle and upper decks. 17 I am going to bring floodwaters on the earth to destroy all life under the heavens, every creature that has the breath of life in it. Everything on earth will perish. 18 But I will establish my covenant with you, and you will enter the ark—you and your sons and your wife and your sons’ wives with you. 19 You are to bring into the ark two of all living creatures, male and female, to keep them alive with you. 20 Two of every kind of bird, of every kind of animal and of every kind of creature that moves along the ground will come to you to be kept alive. 21 You are to take every kind of food that is to be eaten and store it away as food for you and for them.”

22 Noah did everything just as God commanded him.

7  1 The Lord then said to Noah, “Go into the ark, you and your whole family, because I have found you righteous in this generation. 2 Take with you seven pairs of every kind of clean animal, a male and its mate, and one pair of every kind of unclean animal, a male and its mate, 3 and also seven pairs of every kind of bird, male and female, to keep their various kinds alive throughout the earth. 4 Seven days from now I will send rain on the earth for forty days and forty nights, and I will wipe from the face of the earth every living creature I have made.”

5 And Noah did all that the Lord commanded him.

6 Noah was six hundred years old when the floodwaters came on the earth. 7 And Noah and his sons and his wife and his sons’ wives entered the ark to escape the waters of the flood. 8 Pairs of clean and unclean animals, of birds and of all creatures that move along the ground, 9 male and female, came to Noah and entered the ark, as God had commanded Noah. 10 And after the seven days the floodwaters came on the earth.

11 In the six hundredth year of Noah’s life, on the seventeenth day of the second month—on that day all the springs of the great deep burst forth, and the floodgates of the heavens were opened. 12 And rain fell on the earth forty days and forty nights.

17 For forty days the flood kept coming on the earth, and as the waters increased they lifted the ark high above the earth. 18 The waters rose and increased greatly on the earth, and the ark floated on the surface of the water. 19 They rose greatly on the earth, and all the high mountains under the entire heavens were covered. 20 The waters rose and covered the mountains to a depth of more than fifteen cubits.[e][f] 21 Every living thing that moved on land perished—birds, livestock, wild animals, all the creatures that swarm over the earth, and all mankind. 22 Everything on dry land that had the breath of life in its nostrils died. 23 Every living thing on the face of the earth was wiped out; people and animals and the creatures that move along the ground and the birds were wiped from the earth. Only Noah was left, and those with him in the ark.

24 The waters flooded the earth for a hundred and fifty days.

Also, from my earlier article and illustration, Long Ago 200 Angelic Beings Descended Upon Mount Hermon & Things Were Never The Same Again, I talked about how fallen angels tried to corrupt the seed of men, and by fornicating with female humans, they created a new race – Nephilim, basically giants, which were the mixed breed, however, in the extremely rare case, some take normal human form, while being able to transform into a full dragon like their father, the fallen angels.

Thus in my illustration of Noah and the Flood, I have added both dinosaurs, Nephilim (giants) as well as subtly, a Dragon. 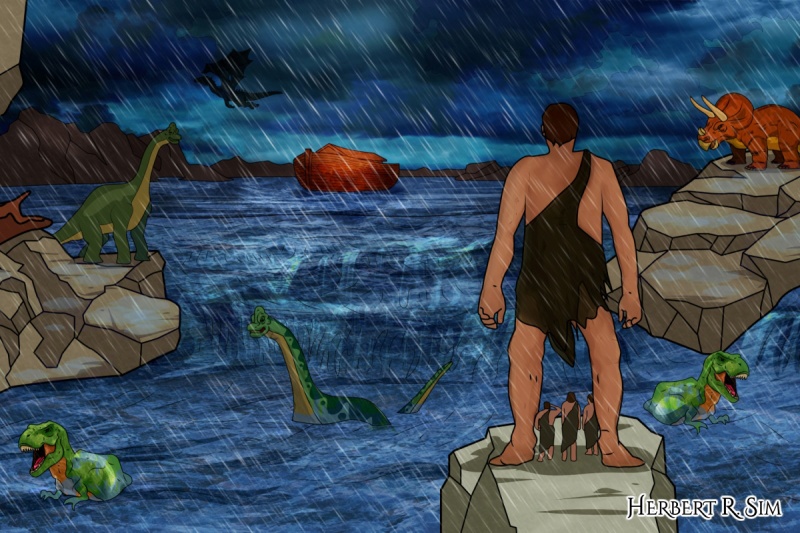 In my final illustration with color, if you look carefully, you will notice that it includes a subtle silhouette of a DRAGON. Read the article above for my in-depth explanation.