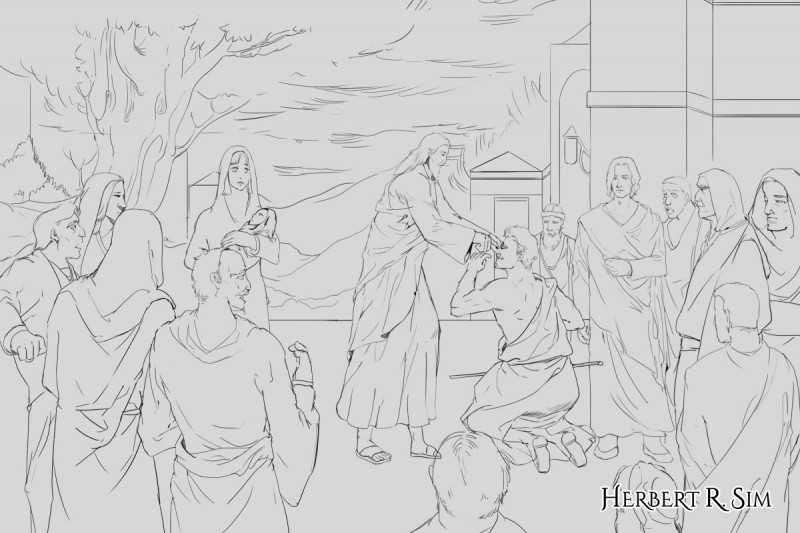 My latest illustration sketch of ‘ Jesus Healing The Man Blind From Birth’ concludes the “Seven Signs of Jesus” series I’ve set myself to over the past few years.

Personal lessons I’ve gleaned from this specific miracle is God will one day take away the spiritual blindness of His people, the Jews and Israel, to finally recognise that Jesus is the Son of God – referencing John 12:37-50.

About spiritual blindness, it is as per mentioned in the story below – referencing John 9:35-41. The Pharisees had sight, but could not see spiritually, that Jesus is the Son of God.

The man blind from birth, while physically blind ‘from birth’, had the “sight” to see, and understand that Jesus is the Son of God.

This brings me to refer to a story from the old testament where Elisha opened the spiritual eyes of his servant so he can see the unseen spiritual armies and forces (full of horses and chariots of fire), and to literally removing the physical sight of the enemies – referencing 2 Kings 6:17-20.

17 And Elisha prayed, “Open his eyes, Lord, so that he may see.” Then the Lord opened the servant’s eyes, and he looked and saw the hills full of horses and chariots of fire all around Elisha. 18 As the enemy came down toward him, Elisha prayed to the Lord, “Strike this army with blindness.” So he struck them with blindness, as Elisha had asked. 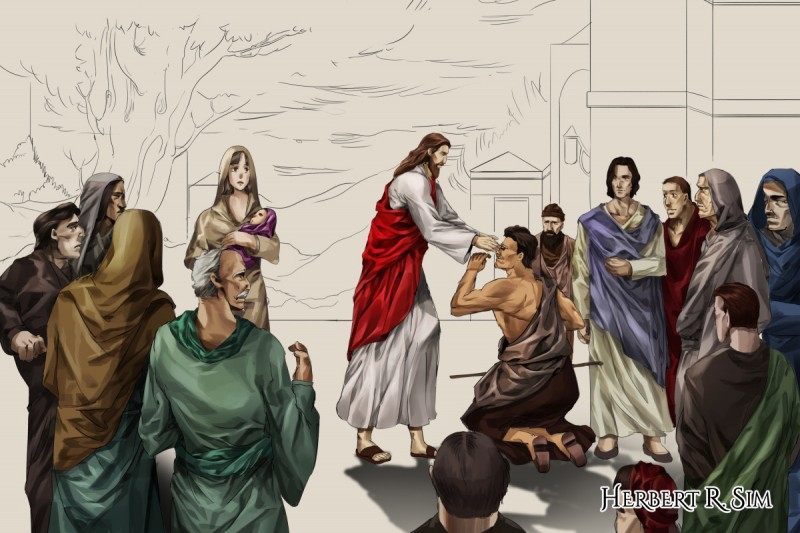 If you notice carefully, I illustrated as accurately as I could depicted in the Bible, where Jesus placed mud on the eyes of the man blind from birth. And while the people surrounding were observing, and some with contempt.

9 As he went along, he saw a man blind from birth. 2 His disciples asked him, “Rabbi, who sinned, this man or his parents, that he was born blind?”

3 “Neither this man nor his parents sinned,” said Jesus, “but this happened so that the works of God might be displayed in him. 4 As long as it is day, we must do the works of him who sent me. Night is coming, when no one can work. 5 While I am in the world, I am the light of the world.”

6 After saying this, he spit on the ground, made some mud with the saliva, and put it on the man’s eyes. 7 “Go,” he told him, “wash in the Pool of Siloam” (this word means “Sent”). So the man went and washed, and came home seeing.

8 His neighbors and those who had formerly seen him begging asked, “Isn’t this the same man who used to sit and beg?” 9 Some claimed that he was.

But he himself insisted, “I am the man.”

10 “How then were your eyes opened?” they asked.

11 He replied, “The man they call Jesus made some mud and put it on my eyes. He told me to go to Siloam and wash. So I went and washed, and then I could see.”

The Pharisees Investigate the Healing

13 They brought to the Pharisees the man who had been blind. 14 Now the day on which Jesus had made the mud and opened the man’s eyes was a Sabbath. 15 Therefore the Pharisees also asked him how he had received his sight. “He put mud on my eyes,” the man replied, “and I washed, and now I see.”

16 Some of the Pharisees said, “This man is not from God, for he does not keep the Sabbath.”

But others asked, “How can a sinner perform such signs?” So they were divided.

17 Then they turned again to the blind man, “What have you to say about him? It was your eyes he opened.”

The man replied, “He is a prophet.”

18 They still did not believe that he had been blind and had received his sight until they sent for the man’s parents. 19 “Is this your son?” they asked. “Is this the one you say was born blind? How is it that now he can see?”

20 “We know he is our son,” the parents answered, “and we know he was born blind. 21 But how he can see now, or who opened his eyes, we don’t know. Ask him. He is of age; he will speak for himself.” 22 His parents said this because they were afraid of the Jewish leaders, who already had decided that anyone who acknowledged that Jesus was the Messiah would be put out of the synagogue. 23 That was why his parents said, “He is of age; ask him.”

24 A second time they summoned the man who had been blind. “Give glory to God by telling the truth,” they said. “We know this man is a sinner.”

27 He answered, “I have told you already and you did not listen. Why do you want to hear it again? Do you want to become his disciples too?”

28 Then they hurled insults at him and said, “You are this fellow’s disciple! We are disciples of Moses! 29 We know that God spoke to Moses, but as for this fellow, we don’t even know where he comes from.”

30 The man answered, “Now that is remarkable! You don’t know where he comes from, yet he opened my eyes. 31 We know that God does not listen to sinners. He listens to the godly person who does his will. 32 Nobody has ever heard of opening the eyes of a man born blind. 33 If this man were not from God, he could do nothing.”

34 To this they replied, “You were steeped in sin at birth; how dare you lecture us!” And they threw him out.

35 Jesus heard that they had thrown him out, and when he found him, he said, “Do you believe in the Son of Man?”

37 Jesus said, “You have now seen him; in fact, he is the one speaking with you.”

39 Jesus said,[a]“For judgment I have come into this world, so that the blind will see and those who see will become blind.”

40 Some Pharisees who were with him heard him say this and asked, “What? Are we blind too?”

41 Jesus said, “If you were blind, you would not be guilty of sin; but now that you claim you can see, your guilt remains. 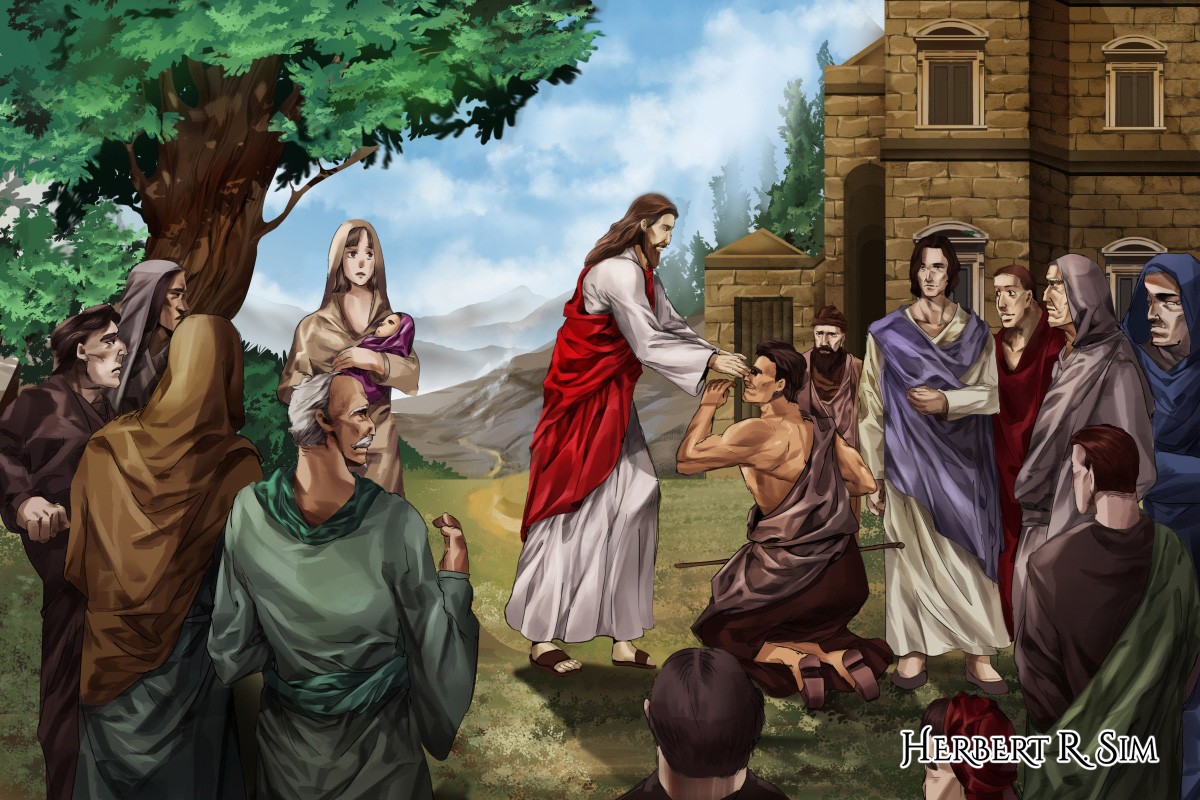 In this final completed illustration, you can see the background fully colored in, I researched to note the accuracy as much as possible to the era and geo-location of the architecture, trees and hills, back in the day. Also, if you noticed as per all my other illustrations, Jesus wears a white robe, with a red sash.