In my latest illustration, I attempt to illustrate the entire world unified as one through the internet – eCommerce, gaming, communication, etc. In a gif, you can see my different sketches.

Repent, for the end is nigh! This rallying cry of demented fanatics may have drawn a chuckle of two in memes, but it is not so funny in 2020. This year has been marked by devastating natural disasters, a pandemic that has shut down economies globally, and seen riots and anarchy across the world. Throw in biblical prophecies of the anti-Christ and “the mark of the beast”, and you cannot help but think this is the end.

Science and religion have always been strange bedfellows. Some Christians in America have shunned technology and still live in a dark age lit by oil lamps. Others have lauded Christian inventors for building cornerstones of technology, such as father of electronics, Michael Faraday, who developed the science of electricity.

The Christian bible itself referred to technology. Revelations tells of two witnesses of God who will prophesy and “stand before the Lord of the earth”. They have the power to judge the world but will be killed by the beast. Their corpses will be viewed by “every people, tribe and language and nations”. Some Christians say this bears witness to satellite television and perhaps even live streaming.

Scholars have also claimed to have cracked a hidden code that foretells the end of days in 2021. Rabbis, priests, mathematicians and professors claim the first five books of the Jewish Torah predicted the election of American President Donald Trump and the destruction of the American World Trade Center on 9/11. A documentary explained the original Jewish text — written without punctuation or spaces — looks almost like computer code, which showed scholars how to decode it.

Mark of the beast

Earlier this year, Microsoft filed a patent numbered W0/2020/060606. It was for a microchip inserted into a human body that could generate data to mine cryptocurrency, claimed Cointelegraph. Christians believe 666 is the number of the beast mentioned in the bible. Fullfact.org later clarified that the patent made no mention of an embedded chip. Instead, data would be collected through a sensor from a device.

Earlier this year, Elon Musk demonstrated a brain computer interface (BCI) designed by his company Neuralink. The demo fell short of its promises to ‘solve important brain of spine issues with seamlessly implanted devices’, said The Next Web. In actual fact, BCIs have been deployed for a while now and a paper was published this year with insights from real users.

To Christians, the neurochip portends the ‘mark of the beast’ which would be placed on their heads or their right hands and people could not trade without it. While Musk’s Neuralink may not have payment capabilities — yet — it is not a stretch of the imagination to say it could well be added — the above mentioned 666 software by Microsoft for example. 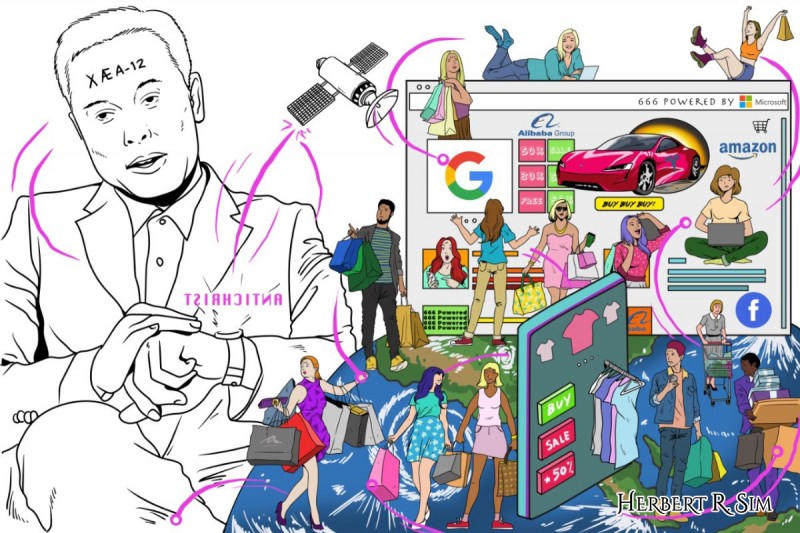 In the background, I feature X Æ A-Xii as a god ruling the world, checking the time on the watch, with his father Elon Musk’s SPACE-X satelite orbiting around earth.

On May 4 this year, Musk and Canadian musician Grimes welcomed a baby into the world. In true celebrity fashion, they named the boy X Æ A-Xii. Twitter exploded as people attempted to say the name.

Some theorists have noted the name may be more sinister. Youtube channel Bright Weird has posited a theory that the baby’s unusual name adds up to 666. Interestingly, Grimes said “A-XII” is a nod to their favourite aircraft, also known as the Archangel. The devil is a fallen archangel. Also, Grimes’ music has once been described as “the kind of music you imagine a group of vampires would listen to…”. We all know the way to kill vampires is with Holy Water, Crucifixes and the Holy Eucharist.

Also consider this trinity of signs: Space X owns the satellite and skies (heavens); Neuralink embedding chips (mark) on head; and, some say, the second coming of Christ will happen after 2030, which will make X Æ A-Xii 10 years old. Interestingly, Damien, the protagonist in, arguably, the scariest Anti-Christ movie of all time, The Omen, was 13 when he accepts his unholy powers. Like many teenpreneurs, that would place X Æ A-Xii at a prime age to use patent 060606. Jesus first visited the temple at 12 years old, or perhaps the same time as Jesus started his ministry at age 30? That would put it either at 2032 or 2050.

The Christian bible also tells the story of the Tower of Babel where men, able to communicate in one language, sought to reach heaven. Seeing this, God said: “If as one people speaking the same language, they have begun to do this, then nothing they plan to do will be impossible for them.” God then scattered and gave them different tongues.

Facebook is already aiming to be a one-stop platform for social connection, gaming, and even for payments across Facebook, Instagram and Messenger. It will of course be doing so via “Project Libra”, a digital money designed for the masses. Outside of the Facebook family, Libra can ostensibly be used on Uber, Spotify and MasterCard.

Four years ago in China, Wechat had already grabbed headlines for offering an all-in-one platform. Users could hail a cab, book movie screenings, play games, pay bills, check in for flights and more. In Singapore, Grab has similar ambitions. The ride-hailing company recently acknowledged transport is no longer a key driver of its growth, instead food and financial services account for 50 per cent of its gross merchandise volume (GMV).

China also has ambitious plans for its digital Yuan. A digital money that is not a cryptocurrency, it aims to be the reference — or global — currency of the future. However, right now, its most pressing issue is the distrust of the Chinese government. The Europeans are not far behind with their own digital euro but according to the Bank of International Settlements, the digital Yuan is the most far along. These are all signs of a unified world, something God does not approve.

The coming of the Son of Perdition

The end days will see the manifestation of the Anti-Christ, a man that will establish a new government, bring about a unified religion and build a new temple, says Ambassadors of Christ (AoC). United States’ President Trump’s “deal of the century” to bring peace in the Middle East is the first step in this prophecy.

Observers say the deal, which sits favourably with the Christian Zionist and Evangelicals, may keep Trump in the White House for a second term. Some Christian evangelicals have even deigned to keep Trump in power so peace can reign in the Middle East—thus setting the wheels in motion for the end times. 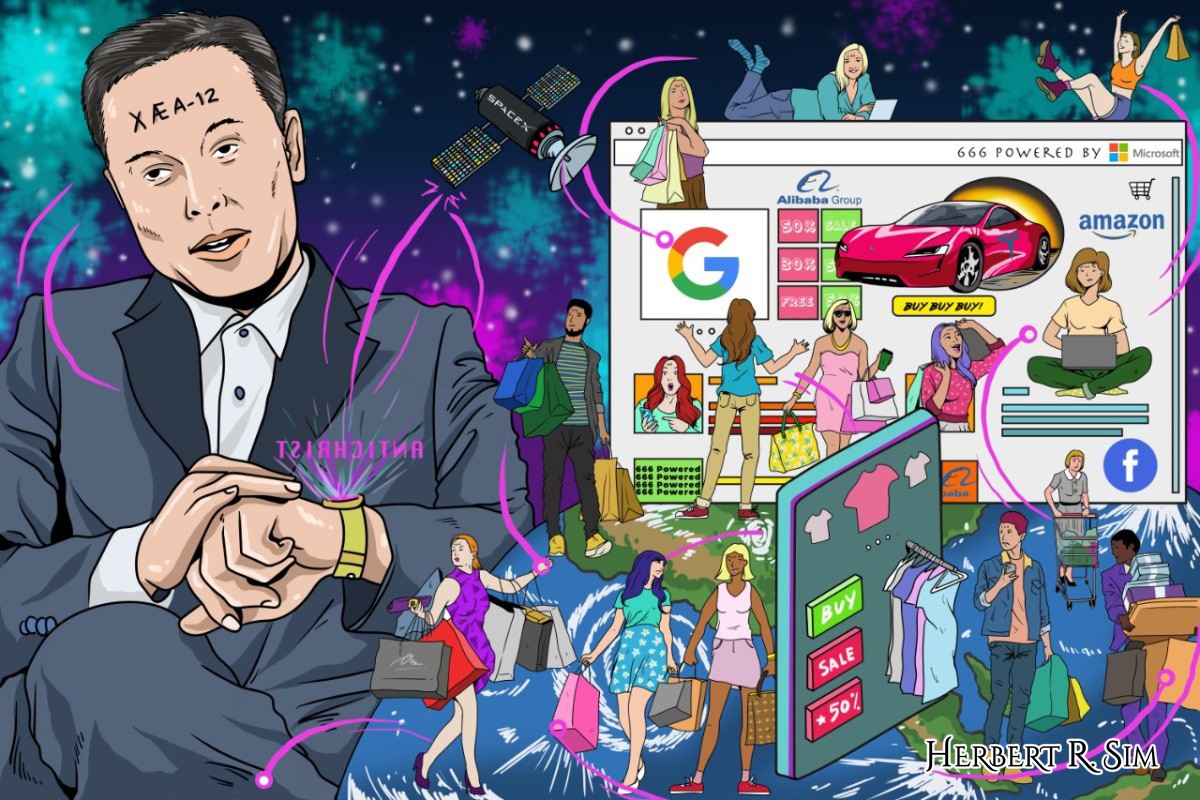 In the final full-color, the emphasis is the ‘connectivity’ unifying the entire world under the rule of the one single person – the Anti-Christ. If you zoom up close, everyone has the mark 666 on their foreheads.