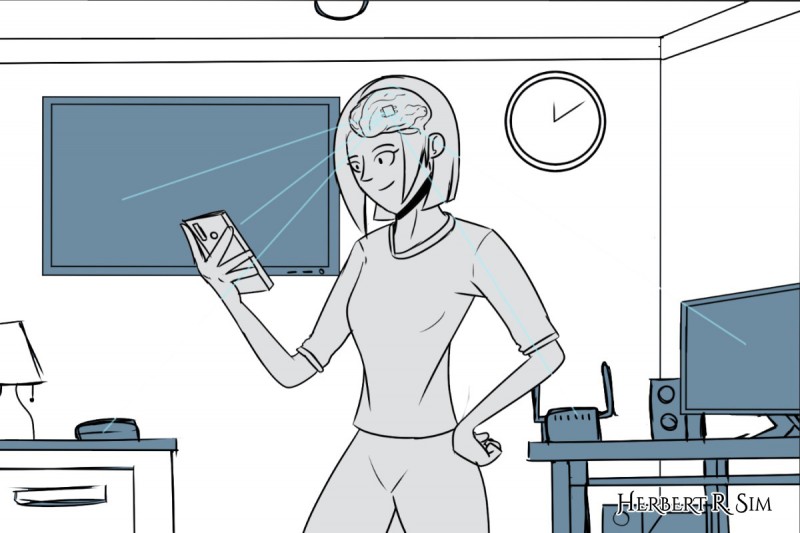 In my latest illustration, I sketched a future possibility of the functions of the neurochip (Brain-Computer Interface) with functionalities for consumers, to directly control home-electronic appliances, etc…

More than 400,000 human beings already have a digital device inside their heads, with more than 50,000 new surgical operations taking place every year. Most of these devices are connected to the auditory nerve as cochlear implants, to treat deafness, and a few to the optic nerve or the retina. But a rapidly growing number of people have chips which are directly fused with their own brains.

In many cases, this is to help control involuntary tremors in Parkinson’s disease. In other cases, the aim is to give muscle control to paralysed people. For example, as reported by New Scientist, Erik Sorto is a tetraplegic who moves his robotic arm by thinking, using an implanted device created by Caltech.

Connecting brains to chips is really easy — once you have got the chip safely embedded inside someone’s head. Brain cells instantly recognise digital intelligence, because both chips and brain cells use tiny electrical signals to communicate.

Technology experts, authors and neuroscientists are hopeful of a world in which the mind can be edited like software, changing memories, beliefs or personalities at the stroke of a keyboard. But we’ve learned a lesson from the thickening layer of computation in our lives, turning every toaster and toothbrush into a “smart” device: be careful what you wish for in networked intelligence.

Many startups in neuroscience and neural pathways are focusing on a radical proposition: they want to write, not just read, in the language of the brain.

The vision is compelling and terrifying at the same time. Being able to correct the misfirings of our most enigmatic organ would be transformative for those who suffer from Parkinson’s, Alzheimer’s and a host of other diseases haunting the mind. On the other hand, consider the implications: if any brain can be rewritten, if all of us are running on the same intellectual code, what does that say for the notion of individuality, or identity, or free will itself? Once it’s possible to edit the mind, the bedrock of truth and lived experience will be irrevocably changed, at risk of silent manipulation on a profound level.

What these companies are working on is the first, crude attempt to build a computational input-output system for the mind.

The path forward with BCIs.

Placing a careful look at some of the current Brain-Computer Interface (BCI) demonstrations reveals we still have a way to go: When BCIs produce movements, they are much slower, less precise and less complex than what able-bodied people do easily every day with their limbs. Bionic eyes offer very low-resolution vision; cochlear implants can electronically carry limited speech information, but distort the experience of music.

And to make all these technologies work, electrodes have to be surgically implanted — a prospect most people today wouldn’t consider.

No need for surgery to exist

Not all BCIs, however, are invasive. Noninvasive BCIs that don’t require surgery do exist; they are typically based on electrical (EEG) recordings from the scalp and have been used to demonstrate control of cursors, wheelchairs, robotic arms, drones, humanoid robots and even brain-to-brain communication.

But all these demos have been in the laboratory — where the rooms are quiet, the test subjects aren’t distracted, the technical setup is long and methodical, and experiments last only long enough to show that a concept is possible. It’s proved very difficult to make these systems fast and robust enough to be of practical use in the real world.

Even with implanted electrodes, another problem with trying to read minds arises from how our brains are structured. We know that each neuron and their thousands of connected neighbors form an unimaginably large and ever-changing network. What might this mean for neuroengineers? 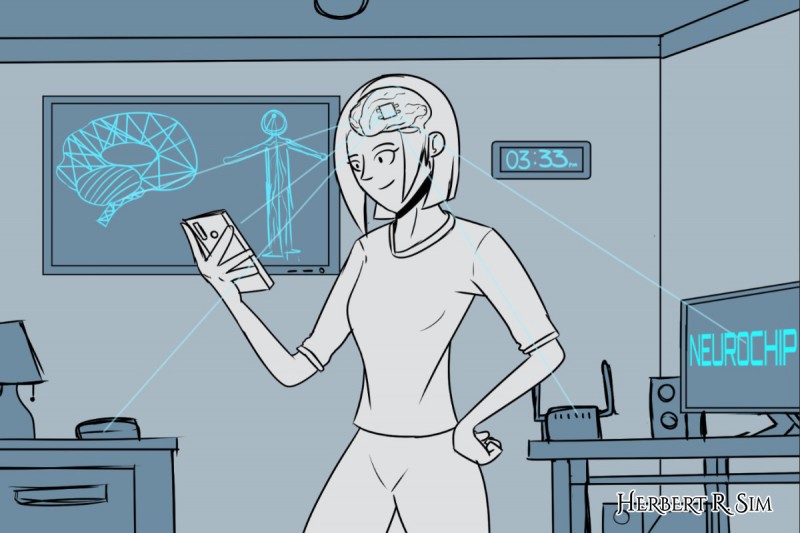 To further emphasis on the Artificial Intelligence and Robotics aspect of the Neurochip, in my work-in-progress I added the human brain and the human nervous system on the TV screen, and the word NeuroChip on the computer screen.

How a Neural Brain Works in a Social Setting

Imagine you’re trying to understand a conversation between a big group of friends about a complicated subject, but you’re allowed to listen to only a single person. You might be able to figure out the very rough topic of what the conversation is about, but definitely not all the details and nuances of the entire discussion.

Because even our best implants only allow us to listen to a few small patches of the brain at a time, we can do some impressive things, but we’re nowhere near understanding the full conversation.

There is also what we think of as a language barrier. Neurons communicate with each other through a complex interaction of electrical signals and chemical reactions. This native electro-chemical language can be interpreted with electrical circuits, but it’s not easy. Similarly, when we speak back to the brain using electrical stimulation, it is with a heavy electrical “accent.” This makes it difficult for neurons to understand what the stimulation is trying to convey in the midst of all the other ongoing neural activity.

Finally, there is the problem of damage. Brain tissue is soft and flexible, while most of our electrically conductive materials — the wires that connect to brain tissue — tend to be very rigid. This means that implanted electronics often cause scarring and immune reactions that mean the implants to lose effectiveness over time. Flexible biocompatible fibers and arrays may eventually help in this regard.

Despite all these challenges, scientists stay optimistic about our bionic future. BCIs don’t have to be perfect. The brain is amazingly adaptive and capable of learning to use BCIs in a manner similar to how we learn new skills like driving a car or using a touchscreen interface. Similarly, the brain can learn to interpret new types of sensory information even when it’s delivered noninvasively using, for example, magnetic pulses.

Ultimately, we believe a “co-adaptive” bidirectional BCI, where the electronics learns with the brain and talks back to the brain constantly during the process of learning, may prove to be a necessary step to build the neural bridge. Building such co-adaptive bidirectional BCIs is the goal of our center. The global scientific community stays forward looking about recent successes in targeted treatment of diseases like diabetes using “electroceuticals” — experimental small implants that treat a disease without drugs by communicating commands directly to internal organs.

And researchers have discovered new ways of overcoming the electrical-to-biochemical language barrier. Injectible “neural lace,” for example, may prove to be a promising way to gradually allow neurons to grow alongside implanted electrodes rather than rejecting them. Flexible nanowire-based probes, flexible neuron scaffolds and glassy carbon interfaces may also allow biological and technological computers to happily coexist in our bodies in the future. 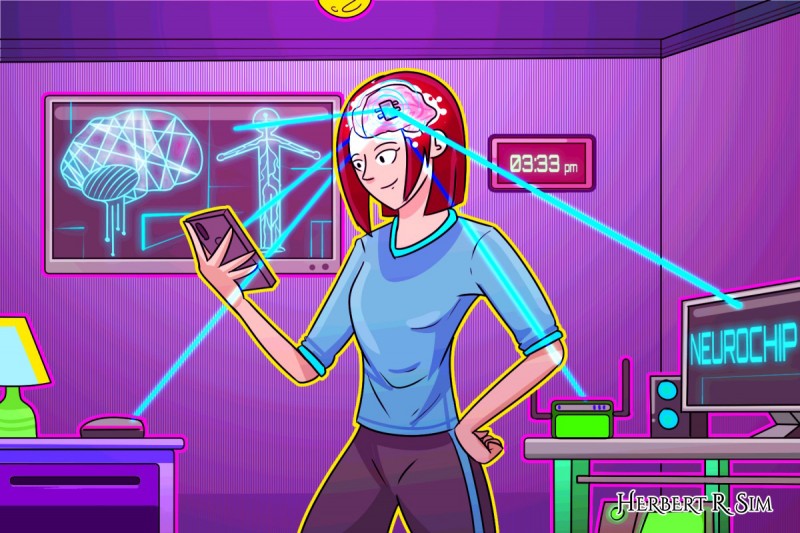 In my final completed illustration, I colored it in neon-style to bring out the futuristic element. Of course, the rays from the neurochip to the electronics are symbolic for illustration purposes.

From assistive to augmentative: The next frontier

Neuroscience start ups that are expected to explode on the tech scene have the stated ultimate goal of enhancing humans with BCIs to give our brains a leg up in the ongoing arms race between human and artificial intelligence. Tech analysts and scientists are optimistic with the ability to connect to our technologies, the human brain could enhance its own capabilities — possibly allowing us to avoid a potential dystopian future where AI has far surpassed natural human capabilities. Such a vision certainly may seem far-off or fanciful, but we shouldn’t dismiss an idea on strangeness alone. After all, self-driving cars were relegated to the realm of science fiction even a decade and a half ago — and are now placed to hit highways.

In a closer future, as BCIs move beyond restoring function in disabled people to augmenting able-bodied individuals beyond their human capacity, we need to be acutely aware of a host of issues related to consent, privacy, identity, agency and inequality. In many academic centers, teams of philosophers, clinicians and engineers are working actively to address these ethical, moral and social justice issues and offer neuroethical guidelines before the field progresses too far ahead.

‘This technology can likely be scaled up such that it will become a novel tool for medium-throughput drug screening, in addition to its usefulness for basic biomedical research,’ said Dr Gerald Zamponi, head of the Department of Physiology and Pharmacology, and member of the Hotchkiss Brain Institute at the University of Calgary in Western Canada.

Connecting our brains directly to technology may ultimately be a natural progression of how humans have augmented themselves with technology over the ages, from using wheels to overcome our bipedal limitations to making notations on clay tablets and paper to augment our memories.

Much like the computers, smartphones and virtual reality headsets of today, augmentative BCIs, when they finally arrive on the consumer market, will be exhilarating, frustrating, risky and, at the same time, full of promise.

There are numerous goals for those developing neurochip breakthroughs in neuroscience at the University of Calgary and the MIT —helping people with debilitating conditions like Locked In Syndrome, also known as a pseudocoma, are high among them. Tech stalwarts such as Elon Musk also desire to make sure that humanity can hold its own in the future against artificial intelligence.

Musk has long been on the record as being worried about a future dominated by A.I. In 2015 at a conference, he said that “the danger of AI is much greater than the danger of nuclear warheads.”

Founder and CEO of neuroscience tech firm — Kernel, Bryan Johnson speaking at the World Economic Forum in 2015, argues the AI tomorrow will be one that is a hybrid of the artificial and the natural, and this will be a formidable challenger for neuroscience to manage. “Machines of all kinds can help us along the way, but our vision is one in which we humans maintain and expand our authorial power. The advanced intelligence of tomorrow is a collaboration between the natural and the artificial. United, unheard of possibilities abound. We want to expand the bounds of human intelligence, and this is our start, small by design.”