Monopolies in the Free Market Economy 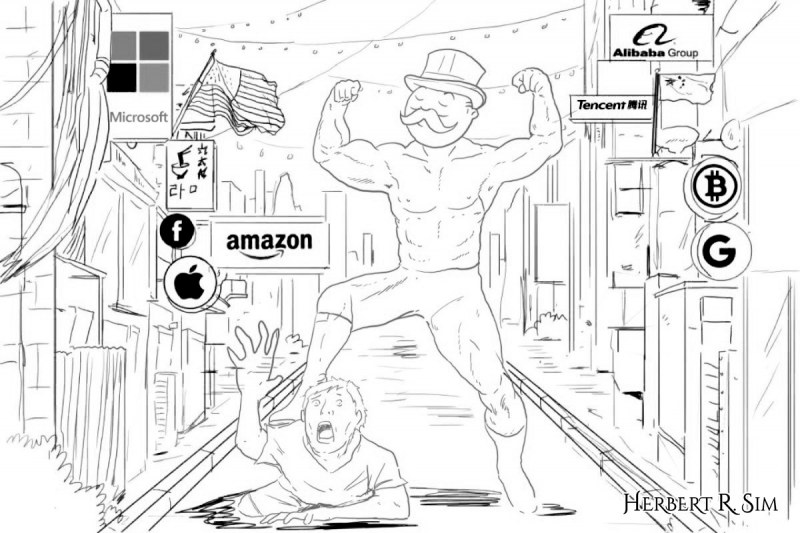 In my latest illustration, I illustrate the infamous Monopoly character (the top-hat-wearing man known as Rich Uncle Pennybags) bullying a random citizen blatantly on the open streets, while flexing and showing off his biceps.

An epic battle has formed in the courts of America. Epic Games sued Apple after Fortnite, one of its best-selling mobile games to date, was pulled from the iOS App Store. Google did the same shortly after.

The game was removed as it had violated its commission guidelines, said Apple. Fortnite offered users to pay the game developer directly with a discount, bypassing the app stores—and its hefty commissions. Within minutes, Epic Games sued and launched a marketing campaign against Apple with a parody of the tech titan’s own iconic ‘1984’ ad which, ironically, railed against the monopoly of cookie-cutter IBM PCs.

The case against Apple and Google is an abuse of power, according to Epic Games. ‘The removal of Fortnite is yet another example of Apple flexing its enormous power to maintain 100% monopoly over the iOS In-App Payment Processing Market’, said Epic Games. The timing of its lawsuit and marketing campaign underscores Epic Games’ deliberate stand against the high fees imposed by digital marketplaces.

Big Tech in the spotlight

This puts Apple in the hotseat yet again after the antitrust hearing on Big Tech just weeks earlier. It, along with Amazon, Facebook (and its entities, Instagram and Whatsapp), Alphabet (Google’s parent company), was accused of pushing down competition with their crushing popularity.

History shows monopolies are not new. Microsoft was taken to task in 2009 after it tried to kill off web browser alternative Netscape. China authorities are watching Tencent Holdings and the Alibaba Group—which, together, have fingers in the media, internet, e-commerce, retail, artificial intelligence pie—closely to prevent ‘an operator holding a dominant position’.

Lest you think it’s only the Americans and Chinese that are worried about anti-competitive practices, the European Union has also taken Google to task for favouring smartphones that use its Android operating system. Meanwhile, many industry players in Hollywood are concerned Netflix will drive other media services like HBO and Amazon out. 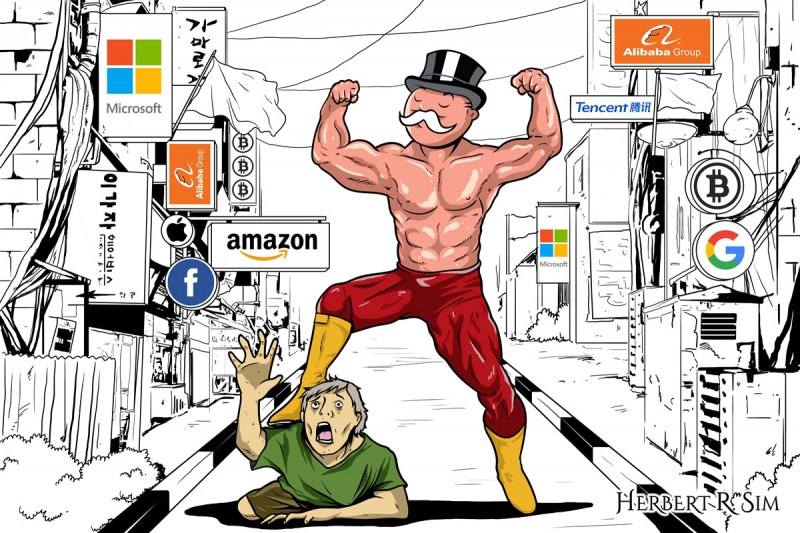 In the illustration too, brand logos are featured on the billboards – Microsoft, Alibaba, Apple, Facebook, Amazon, Google, Tencent, and of course my favorite Bitcoin.

For any company to be branded a monopoly, or monopsony, it needs to be proven that it has the power to set conditions in a free market operating under the laws of supply and demand.

In that regard, Apple or Google are not. They do, however, exert immense power over their popular marketplaces that are attractive to content developers as they have the critical mass that sellers want. That popularity however doesn’t limit the choices for content providers. If any company were unhappy with the guidelines of use, they may start their own marketplace.

The internet started as a platform to freely share knowledge. Since then it has widened horizons and shrunk the world. It offered the convenience of a connected world, access to information at your fingertips, and coffeeshops that know exactly how you like your iced skinny Hazelnut Macchiato with sugar-free syrup, extra shot, light ice with no whip cream morning cuppa.

Ironically, the very convenience that we enjoy are also the reasons why the internet has devolved into a mighty few. Monopoly is just bad business. As companies become all powerful, it becomes more difficult for smaller players to come off the bench. This, in turn, leaves consumers at the mercy of the dominant players. It is then up to governments to set regulation to stop big companies from killing off market forces.

Too big to control?

Facebook is an example of a company that has grown out of control. As a business, its advertising engine is a powerful tool that collects data on its 2 billion users. This information can turn the tide in favour of any company or even government agencies. It has even been claimed to skew favour in US President Trump’s victory and led to Brexit, said Cambridge Analytica whistle-blower, Chris Wylie.

In Asia, it was in the news for challenging the Thai government after it was compelled to block a group known for criticising the monarchy, which is illegal under its lese majeste laws. It has also threatened to “block users and news organisations from sharing local and international news on Facebook and Instagram in Australia if the country passed a proposed code of conduct aimed at curbing the power of Facebook and Google”.

Facebook knows too well its own power. CEO Mark Zuckerberg had even called for regulators and governments to be more active in managing content on the internet. The responsibility to monitor harmful content, he said, was too great for firms to bear alone. Governments around the world have since taken steps to hold content companies accountable.

Yet any regulation on social networks will likely be seen as a curb on freedoms of expressions. Facebook and Uber have said existing laws and nation states are ‘too outdated’ for disruptive tech companies. 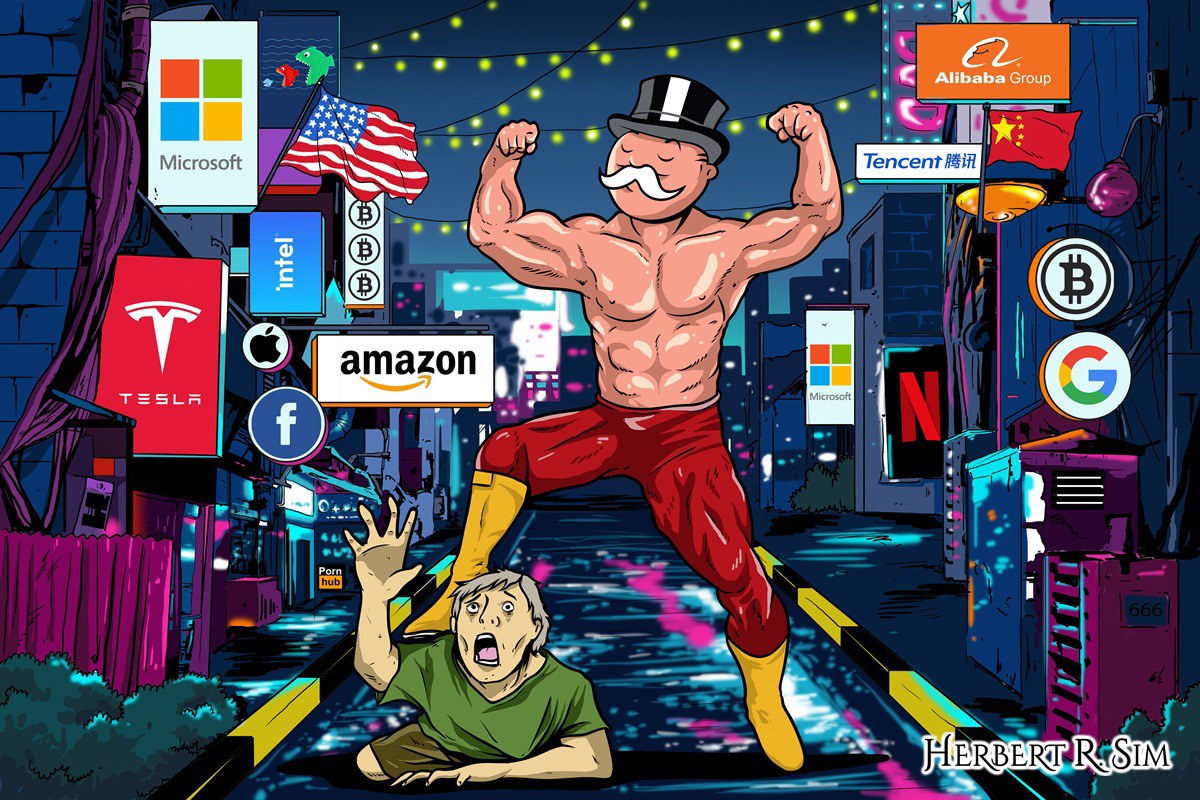 In my final illustration in full color, I’ve added in many other brand logos – Tesla, Intel, Netflix, see if you can spot the subtle, hidden brands & symbols too.

Besides the option of a decentralised crypto-based internet, the onus to regulate content then falls to the users. That means calling Facebook out when terrorists livestream their attacks or raising the alarm on self-harm content on Pinterest and Instagram, which could lead to troubled youths taking their lives as Molly Russell did.

Ironically, the biggest worry about big tech’s dominance is on freedoms of expressions. Companies are inherently biased as they have profits to maintain and they have to account to shareholders. With their booming popularity, smaller players will hardly be able to get a word in.

Last year, US President Trump reportedly drafted an executive order that gives power to the Federal Communications Commission (FCC) to monitor how Facebook, Twitter, Instagram and Twitter show content on their platforms. It will see cases where social media websites remove or suppress content. Sites that do not notify users before taking their content down are not liable for protection in American law.

This is an epic step to reign in big tech. It is also a sign for consumers to diversify their internet content sources, unless they want to wake up to a world where a few companies dictate how they think.