The Internet Is Imperfect: In Blockchain We Trust 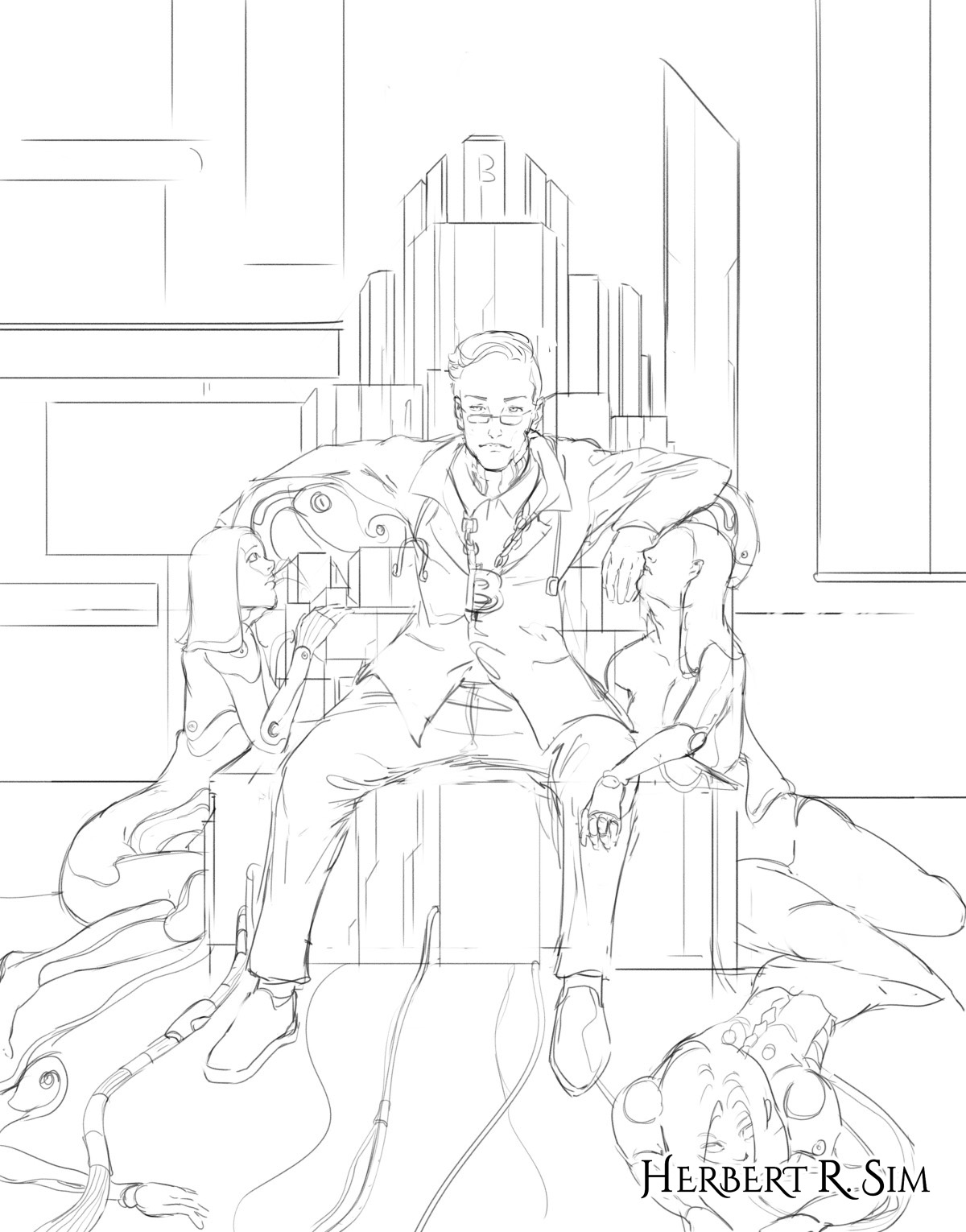 In my latest illustration, I feature a distant future where Satoshi Nakamoto, the original Bitcoin Man, has already come forth making known of his true identity, where he literally sits on his throne, with artificial intelligence robots strewn by his side, serving his needs.

Gartner, global research and advisory giant, in a report, argues the blockchain industry will generate an estimated US$3.0 trillion by 2030, a figure that is equivalent to the combined market cap of FAANG. With such high-intensity numbers forecasted, what exactly is the value of the future of the Internet? Furthermore, with measures including mitigating denial-of-service attacks, biometric private keys and digital identities, preventing hacks on automated systems and decentralising data storage, blockchain can help fortify the cyber security industry toward insulating, leveraging and demarcating data.

In its hyper-idealised state, blockchain allows us the assurance of a clear and accounted for transaction. It skips the intermediary – including notaries, insurers and bankers – by asking of us to place our utmost trust in its technology. However, this begs the question of whether we are likely to trust the technology if it is breached repeatedly?

Atmosphere of distrust and scepticism

Global distrust and scepticism with regard to Internet security has been brought on by Cambridge Analytica, Equifax and other breaches. This has led to gross distortion of data through manipulation and overcentralisation. It is reported by CoinTelegraph, companies of varying specialisations and wingspans are entering systems and networks to promote the use of cryptocurrencies. In these times, restoring trust and transparency is critical. There’s Aptoide, a FinTech tool promising a resolution to simplifying in-app payment in emerging markets, where it has the majority of its users. Over in more developed global cities, there’s New York’s HYPR that uses decentralisation to help consumers and employees to access IoT (Internet of Things) applications. Look out as well for Gibraltar’s recently acquired Spanish social media tool Taringa, which looks to empower the unbanked in Latin America and incentivise users through rewarding them with RIF tokens.

There is an imperative need to elevate the workforce of security-minded blockchain developers. This will require education curricula starting with programming classes in secondary schools, up to university degrees with mandatory blockchain-secure coding courses. Currently, the University of Nicosia in Cyprus is the only university in the world to offer a MSc in blockchain, in particular in digital currencies. These degrees will need to be complemented by recognised blockchain security professional certifications like CBSP, but also with the inclusion of blockchain as a topic in cyber-security certifications like CISSP.

According to innovation journal Fast Company, employees in the future should be trained through collective intelligence-based programmes, a framework of usable new knowledge that can be facilitated by blockchain. Leveraging what people know, mechanisms for sharing knowledge and collaboration with experts across varied fields, can all be part of blockchain’s harnessing of collective intelligence. Skills relevant to blockchain, workflow automation and human-centred design, were also the most sought after by employers today, according to a “risking skills” report by LinkedIn and published in the Straits Times.

Furthermore, there is an underlying, unaddressed need to educate users about the security risks they are taking and how to mitigate these effectively at low cost. That will take awareness-raising campaigns and public-private cooperation accompanying people transitioning to blockchain.

Permissioned blockchains could well be the smooth transition blockchain needs to prove its worth, just like the heyday intranets proved the Internet’s worth to the world. In that sense, blockchain adoption by industry giants like Facebook, with its cryptocurrency Libra, provide welcome opportunities to educate the public on what it takes to use blockchain, provided there are no breaches. While securing permissioned blockchains may prove easier due to their reduced exposure, conversely, less pressure to do so could lead to digital breaches.

Vertical friction is a considerable challenge

Vertical friction include participants of a transaction not having access to the same information or the high price of intermediaries. These, in turn, add costs and complexity that dragon global business and trade. In the shipping industry, there is a costly problem with fraudulent shipping documents that result in cargo theft and illegal smuggling. Smart property such as sensor devices can be installed in shipping containers to collect and share the status of shipments in real-time to ensure timely processes and report deviant actions.

The manufacturing industry pays a “trust tax,” the expensive and time-consuming process of establishing trust between transactional partners through constant audits and inspections of processes. Blockchain enables product memory: this means that physical products can log information pertaining to ownership and movement along the supply chain.

Unclear US rules over token sales forced firms to return money to American investors. In other countries, too, rules around digital tokens are in flux. In a Forbes interview with Shone Antsey, executive chairman and co-founder of the Blockchain Intelligence Group, he argues that there will be continued inconsistency about how to define cryptocurrency especially when comparing the US and Asia.

“However, this can also create the impetus for regional regulation along similar lines to the Asian countries who have designed their regulations to balance protections for consumers with a light hand that allows innovation to flourish,” added Anstey.

Technologies are developing and converging too quickly

We see the emergence of a major threat: a scarcity of data veracity, and thereby, scarcity in trust. From centralised to decentralised systems, public to private, automated to the autonomous, intranet to the internet— when each new evolving application and system brings with it a different technology and security infrastructure – it brings with it new risks and rewards.

As a result, it is creating complex challenges for not only securing the IoT ecosystem but also for performing everyday tasks such as sensing, processing, storing information, communicating, analysing, and taking timely action for which, no nation seems to be prepared for.The handling of data is an increasingly hot topic and businesses dealing with it – regardless of commercial reasons driving them – have a legal and moral responsibility to safeguard it. Though security and governance frameworks are increasingly in place, there remains huge uncertainty around catalysing blockchain as a viable data solution.

All of finance is turning into FinTech

This shift demands new infrastructures and payment instruments. The Internet will need to tighten its data management practices and keep in tandem with a globalised, automated, increasingly AI-driven world.

Data is an important, urgent lifeblood of FinTech. In order to really take off and allow cost-effective and widespread implementation of innovative solutions that tame data, regulators, tech leaders and businesses should build the necessary capabilities in operations to maintain technological convergence. The digital revolution gives tremendous opportunities in the finance world for big data and blockchain applications. 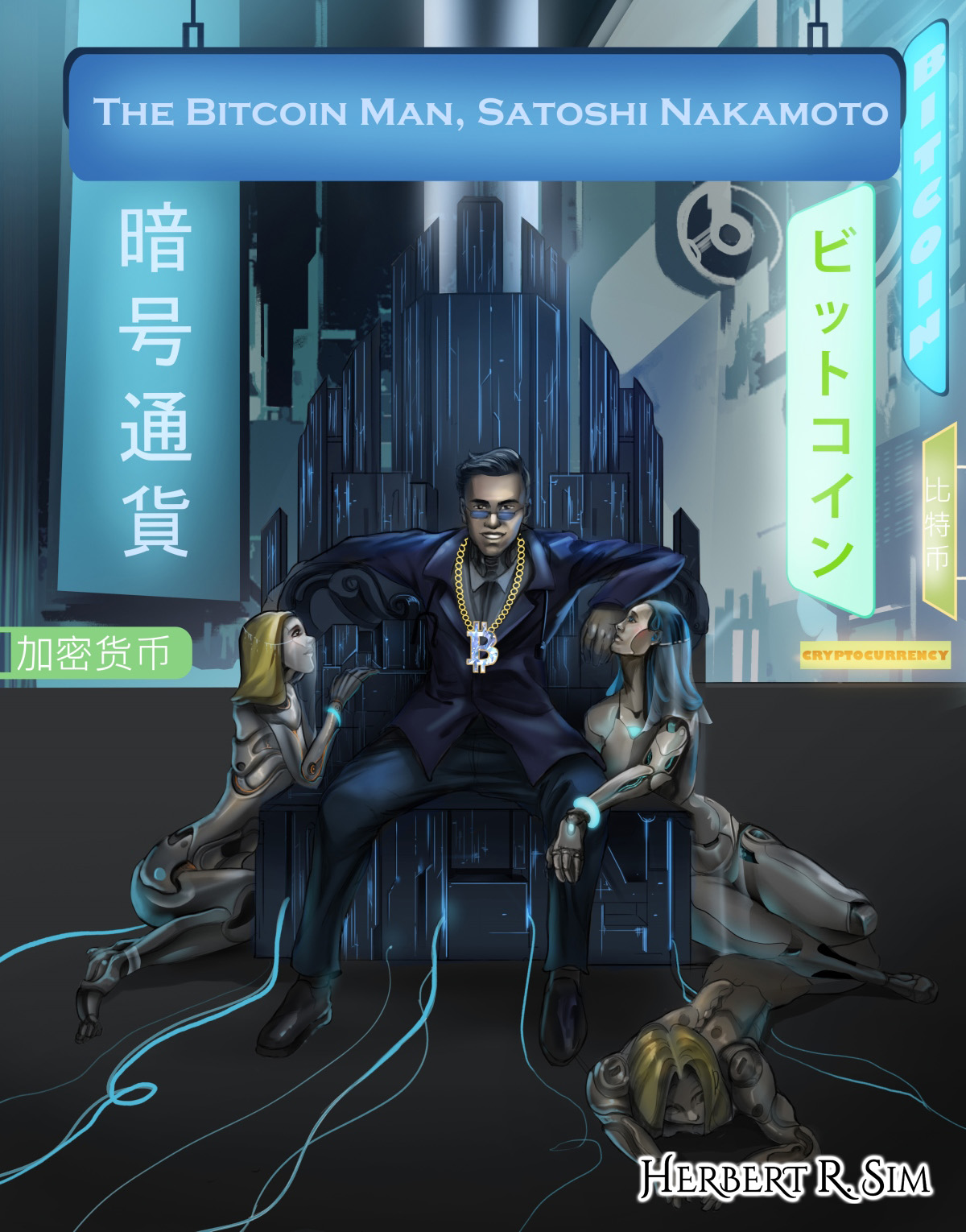 The throne is inspired by Game of Thrones. If you look closely, Satoshi’s neck is made of metal mechanics – representing a future where robotics is integrated into the human body. In my illustration – Man still rules over AI and robots.

Blockchain technology provides an alternative that gives the ownership of data back to users. Blockchain is a decentralised database where data is replicated across several unrelated nodes. No single node can act as a gatekeeper and assume control of your data. Transactions in the ledger are stored in a permanent and verifiable way. Users who store information on the blockchain retain access to it through encryption keys, independent of the service or application that generated it. Start-ups such as Blockstack’s browser add on that empowers consumers with control of their data, Shocard’s identity verification system tracking and Dynamis’ reduction of the need for insurance underwriters both underscore this point. Blockchain’s potential will not be confined to cryptocurrencies but an overhaul of digital assets. With consumers empowered through managing and decision-making of their data, this will allow blockchain to create value across industries from insurance, gaming, telecommunications to media and communications.

Updating apps has more impact than we realise

It’s a must to regularly update apps to improve their protection for blockchain to complement them. Technology Review argues that despite blockchain technology long heralded for its security, they are fallible being prone to “shoddy execution or unintentional software bugs.” Several start-ups are on the radar when it comes to flushing out the dubious entrants in the playstore.  AnChain.ai deploys artificial intelligence to monitor suspicious activity in transactions and has an in-built smart contract code to screen vulnerabilities. For more formal verification techniques grounded in computer science, consider ChainSecurity. Using the flow and logic of mathematics, the auditing tools assure a developer that the contract’s code will fulfil what its creators intended in setting out to do.

By building a global blockchain infrastructure, it will require first making the Internet a more reliable and transparent space. The Industrial Revolution 4.0 is upon us and before we worry about robots and automation, we need to be first concerned with who owns our data and forge a universal public chain suitable for all industries and applications. The idea that an Internet service could have an associated coin or token may be a novel concept to some industries or governments, but the blockchain and cryptocurrencies can do for cloud-based services what open source did for software.