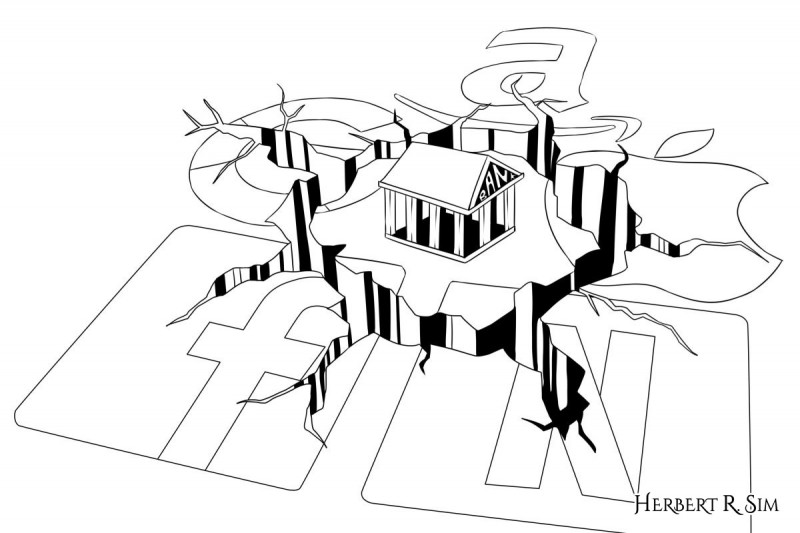 Big Tech firms such as Amazon, Apple, Facebook and Google have become dominant market players in segments ranging from e-books and smartphones, to digital advertising and social media. Governments all over, including the US Congress and European Union, are wrestling with the problem of how much and how to regulate these industry juggernauts that have been likened to nation-states themselves in terms of their resources and reach.

Take a look at the market capitalisation of FAANG, an acronym for the market’s five most popular and best-performing tech stocks – Facebook, Apple, Amazon, Netflix and Alphabet’s Google – for the better part of the last decade. The combined market capitalization of FAANG was as high as US$1 trillion in 2018. Google and Facebook collectively controlled 60 percent of mobile advertising revenue and 51 percent of digital advertising revenue worldwide in 2018. In the US, Apple Inc. owns about 45 percent of the smartphone market, while Amazon commands 47 percent of all US e-commerce sales.

In March 2019, US Democratic presidential contender Elizabeth Warren said breaking up giant tech companies like Facebook and Alphabet’s Google would “keep the marketplace competitive”. She called for laws that would designate large technology companies as “platform utilities,” and for the appointment of regulators who would guard against technology mergers that undermine competition and harm innovation and small businesses.

Ms Warren is right in recognising Big Tech’s growing footprint, which has also started to enter the sphere of cryptocurrencies. 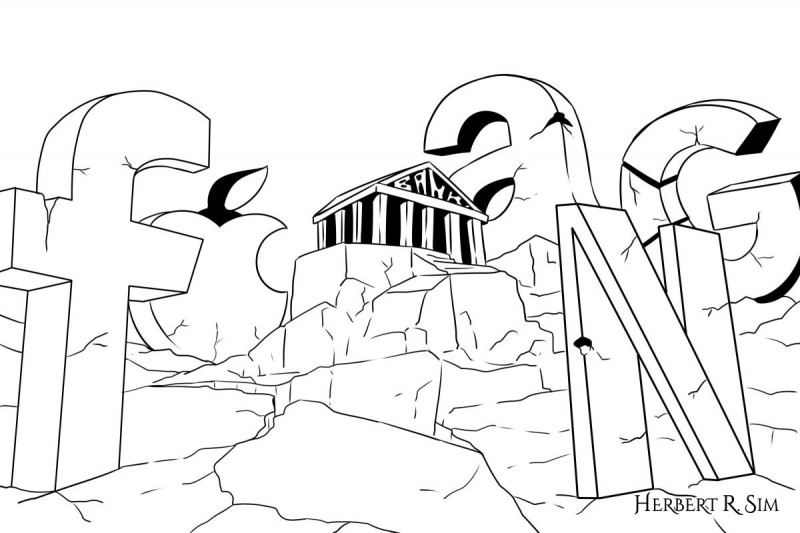 I came up with a new sketch, in a different angle from bottom view, of Big Tech Companies’ logos (Facebook, Apple, Amazon, Netflix and Google) and the Central Bank in the center.

Facebook recently revealed the much-anticipated details of its cryptocurrency, Libra, which will enable consumers to make purchases or send money to people with nearly zero fees. Libra can be pseudonymously bought or cashed out online or at local exchange points like grocery stores. It can be spent via interoperable third-party wallet apps or Facebook’s own Calibra wallet that will be built into WhatsApp, Messenger and its own app.

This ambitious plan is based on open-sourced blockchain technology that will reportedly hand control of the blockchain to a neutral Libra Association. Facebook has said that Libra will eventually have 100 nodes and has already named firms like Visa, Mastercard, PayPal, Uber, eBay and Spotify as having committed to be part of the Libra Association. Instead of fully controlling Libra, Facebook will have a single vote in its governance like the association’s other founding members which have invested at least $10 million each into the project. Each member will be empowered to operate a node on the blockchain and have a voice in determining changes to its code and managing the reserve (i.e. a permissioned blockchain).

Libra’s mission is to enable a simple global currency and financial infrastructure that empowers billions of people, in particular those who do not have access to banking services.According to reports,  cryptocurrency exchange Binance is talking to Facebook about getting involved in Libra, underlining the buzz that the project is creating. Binance’s Chief Strategy Officer, Gin Chao, said that early discussions have taken place with Facebook over a possible listing of the Libra token in future. 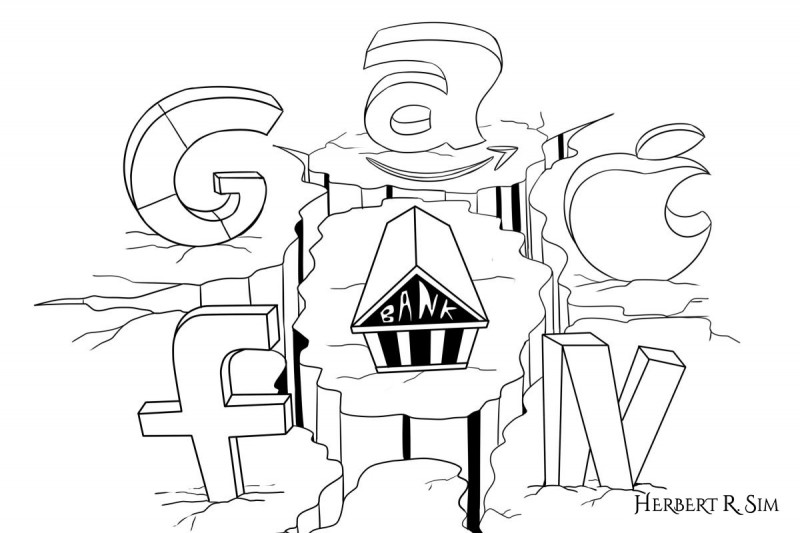 I finalised the sketch from an aerial perspective, showcasing the ground breaking by the Big Tech companies, separating central bank from the rest of the world, making it stand alone by itself.

The beliefs upon which the Libra project is premised are worth taking a closer look for the clues they may offer on the future of cryptocurrencies in relation to fiat currencies.

Among others, the beliefs that the Libra whitepaper states are:  (1) that many more people should have access to financial services and to cheap capital; (2) that people will increasingly trust decentralized forms of governance; (3) that a global currency and financial infrastructure should be designed and governed as a public good; and (4) that we all have a responsibility to help advance financial inclusion, support ethical actors, and continuously uphold the integrity of the ecosystem.

It is worth mentioning that these statements would not be out of place if they came from a central bank or some other government entity instead of a private tech firm. Could they foreshadow a subtle challenge to the existing dominance and relevance of central bank-issued fiat currencies, and the traditional international banking and financial system overseen by governments and international organisations?

Picking up on this, the US congress has already asked Facebook to “immediately agree to a moratorium on any movement forward on Libra”. Congress opines that a product like Libra may lend itself to an entirely new global financial system that is intended to rival US monetary policy and currency, while raising numerous questions related to privacy, trading and national security for investors, consumers and the broader global economy.

Like fiat currencies, Libra is designed to be a stable digital cryptocurrency fully backed by a reserve of real assets — the Libra Reserve — and supported by a competitive network of exchanges buying and selling Libra. This means that anyone with Libra can enjoy a high degree of assurance that they will be able to convert their digital currency into local fiat currency based on an exchange rate, much like exchanging one currency for another when traveling.

If Libra turns out to be a success, it may well be that Libra’s network of partners and user communities will expand to encompass more tech players and their associated networks. Currently, none of the other tech giants (read Google, Apple and Amazon, etc.) are in the fray to join the Libra project, though it is noteworthy that Facebook says they would be welcome to join. In my final illustration, it showcases the central bank broken away from the rest of the ground, standing alone by itself. Representing the Big Tech companies’ successfully destroying its central hold on the people.

The likes of Google (Google Pay) and Apple (Apple Pay) are presently making their own forays into global finance. Industry players also argue that it would not be out of the question for Amazon to introduce its own cryptocurrency; the e-commerce giant is fast becoming a prominent player in the enterprise blockchain space. Twitter CEO Jack Dorsey, who has praised the virtues of Bitcoin, has said, “I would hope that all private companies can see the value of having a stateless currency that all people can access, and is not bounded or constrained by any one corporate entity.”

Big Tech players may be embarking on their own projects, but Libra offers a platform for their aims and resources to coalesce into a unified effort that makes a transformative impact.

This has implications for fiat currencies as it means Big Tech cryptocurrencies may attain a status equal to or even exceeding that of the fiat currencies of today. Big Tech definitely has incentive to collaborate or at least align its respective strategies considering the vast untapped markets of the developing world where they have user bases in the millions. Large numbers of users also means voluminous amounts of data which can be harnessed, studied and monetised for and through cryptocurrencies.

Is the reign of fiat currencies coming to an end, or will we see a more diverse financial landscape? In the larger context, it would also mean the further growth of Big Tech and corporate influence in our economies and societies. All said and done, who will be left standing – Big Tech and corporations or nation-state governments?