The First Murder in the Bible: Cain Kills Abel 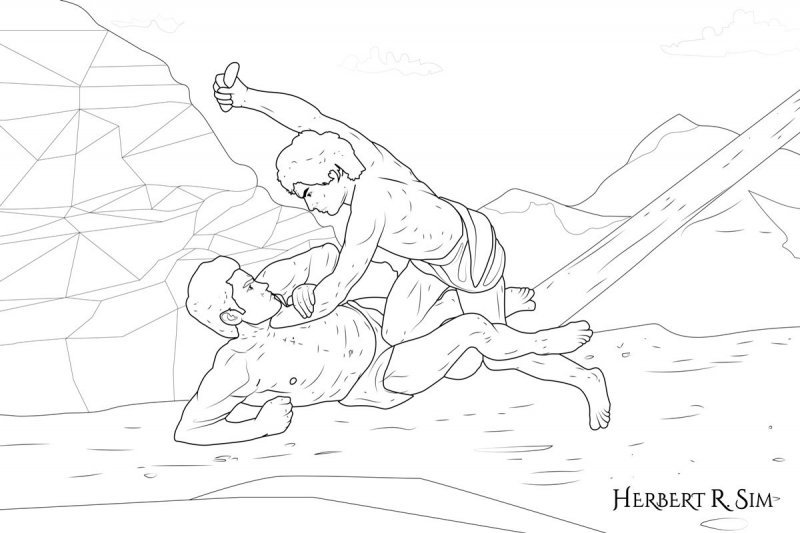 Here in my latest illustration, I attempt to depict the first murder in the Bible – Cain killing Abel. The two brothers are drawn to resemble trending TV series, ‘Vampire Diaries‘ actors. Featuring Paul Wesley as Abel, and Ian Somerhalder as Cain.

In the Book of Genesis of the Bible, Cain and Abel are the first two sons of Adam and Eve. Cain, the firstborn, was a farmer, and his brother Abel was a shepherd. The brothers made sacrifices to God, each of his own produce, but God favored Abel’s sacrifice instead of Cain’s. Cain then murdered Abel, whereupon God punished Cain to a life of wandering.

My theory for Cain’s motive for murdering his brother, is that Cain was instigated by the serpent, a.k.a. the Devil, to kill Abel, who was favored by God, assuming that Abel or his lineage will be responsible for the prophesy/curse by God on the serpent.

God’s Curse on the Serpent

14 So the Lord God said to the serpent:
“Because you have done this,
You are cursed more than all cattle,
And more than every beast of the field;
On your belly you shall go,
And you shall eat dust
All the days of your life.
15 And I will put enmity
Between you and the woman,
And between your seed and her Seed;
He shall bruise your head,
And you shall bruise His heel.”
—— Genesis 3:14-15 (NKJV)

And my theory for God’s reason for rejecting Cain’s sacrifice, is that the offerings by Cain is by the ‘works of his own hands’ – ‘fruit of the ground’, while the offerings by Abel is a lamb, an animal sacrifice, with blood involved. And it shows that, a blood sacrifice is favored and accepted by God.

1 Now Adam knew Eve his wife, and she conceived and bore Cain, and said, “I have acquired a man from the Lord.” 2 Then she bore again, this time his brother Abel. Now Abel was a keeper of sheep, but Cain was a tiller of the ground. 3 And in the process of time it came to pass that Cain brought an offering of the fruit of the ground to the Lord. 4 Abel also brought of the firstborn of his flock and of their fat. And the Lord respected Abel and his offering, 5 but He did not respect Cain and his offering. And Cain was very angry, and his countenance fell.

6 So the Lord said to Cain, “Why are you angry? And why has your countenance fallen? 7 If you do well, will you not be accepted? And if you do not do well, sin lies at the door. And its desire is for you, but you should rule over it.”

9 Then the Lord said to Cain, “Where is Abel your brother?”

13 And Cain said to the Lord, “My punishment is greater than I can bear! 14 Surely You have driven me out this day from the face of the ground; I shall be hidden from Your face; I shall be a fugitive and a vagabond on the earth, and it will happen that anyone who finds me will kill me.”

15 And the Lord said to him, “Therefore, whoever kills Cain, vengeance shall be taken on him sevenfold.” And the Lord set a mark on Cain, lest anyone finding him should kill him. 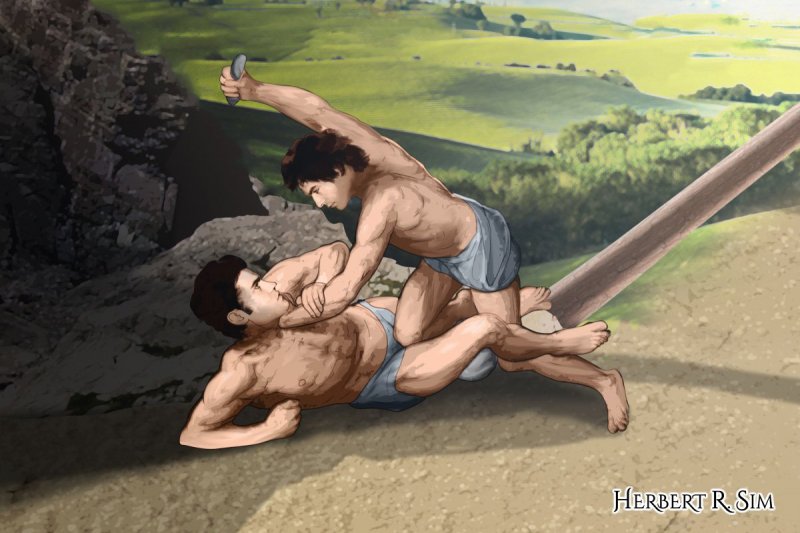 As you can see here above, I depict a struggle put up during the murder, and the reason is because of verse 10 (in bold above) – The voice of your brother’s Blood cries out to Me from the ground. Meaning, the deceased Abel sought for vengeance.