Adam & Eve: The Fall of Man 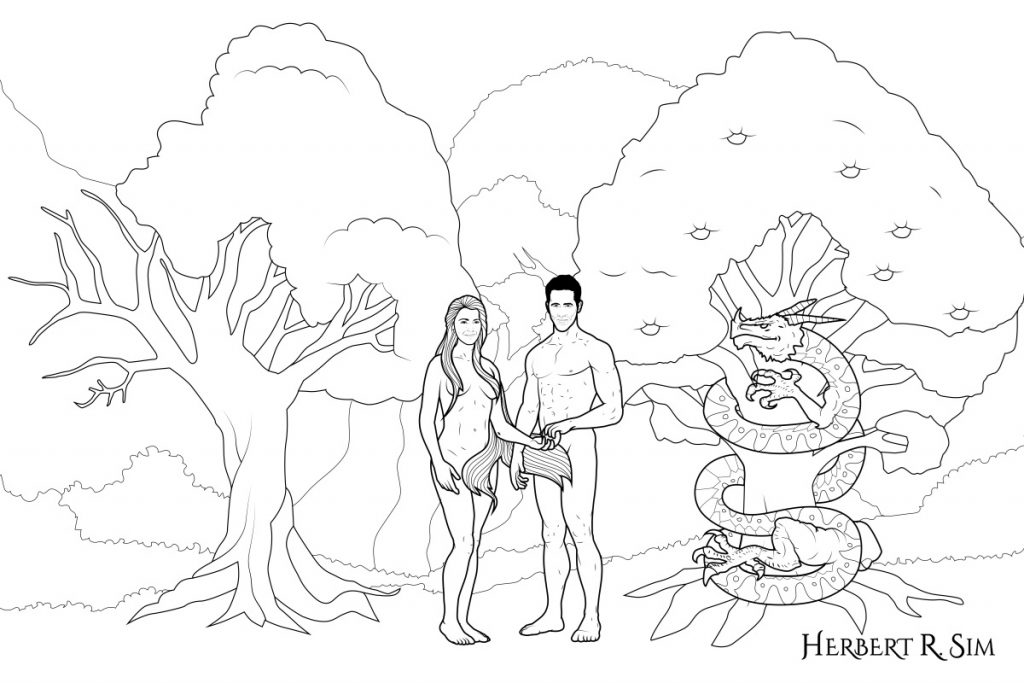 Above, I attempt to illustrate Adam & Eve, from the Book of Genesis from the Bible. The Serpent is featured with legs in my digital illustration (before the curse from God, to crawl on his belly), drawn like a dragon (read my older article in 2011).

Adam and Eve, provides the basis for the doctrines of the fall of man and original sin that are important beliefs in Christianity about the orgin of mankind.

In the Book of Genesis, chapters one through five, God fashions Adam from dust and places him in the Garden of Eden. Adam is told that he can eat freely of all the trees in the garden, except for a tree of the knowledge of good and evil.

Subsequently, Eve is created from one of Adam’s ribs to be Adam’s companion. They are innocent and unembarrassed about their nakedness.

However, a serpent deceives Eve into eating fruit from the forbidden tree, and she gives some of the fruit to Adam. These acts give them additional knowledge, but it gives them the ability to conjure negative and destructive concepts such as shame and evil.

“… You will crawl on your belly
and you will eat dust
all the days of your life.”

God prophetically tells the woman and the man what will be the consequences of their sin of disobeying God. Then he banishes them from the Garden of Eden.

This illustration was designed to be different from the hundreds if not thousands of other “Adam & Eve’ artworks out there in the world. For starters, with the unconventional theory, that the serpent which tempted the first humans Adam and Eve, had legs. And the serpent was drawn dragon-like, that similar to a Chinese dragon, but with a typical western dragon looking face, that similar to Game of Thrones’ dragons.

The Serpent is seen entwined around the trunk of the “tree of the knowledge of good and evil”; who in the story itself tempted Eve to eat the fruit from the tree, who shared the fruit together with Adam.

The “tree of the knowledge of good and evil” is seen, split into two halves, one half representing ‘evil’ was bare and dead, without leaves or fruits, while the other half has green luscious leaves  and bearing fruits.

In the Bible story itself (Genesis 2: 16-17), And the Lord God commanded the man, “You are free to eat from any tree in the garden; but you must not eat from the tree of the knowledge of good and evil, for when you eat from it you will certainly die.”

Adam & Eve were given the choice, the free will, by God, to show Him that they loved Him, by respecting His will. This choice was depicted in this illustration by the artist, by showcasing the other “tree of life” which had fruits as well. The tree has bright lights emanting from it, signifying ‘life’. 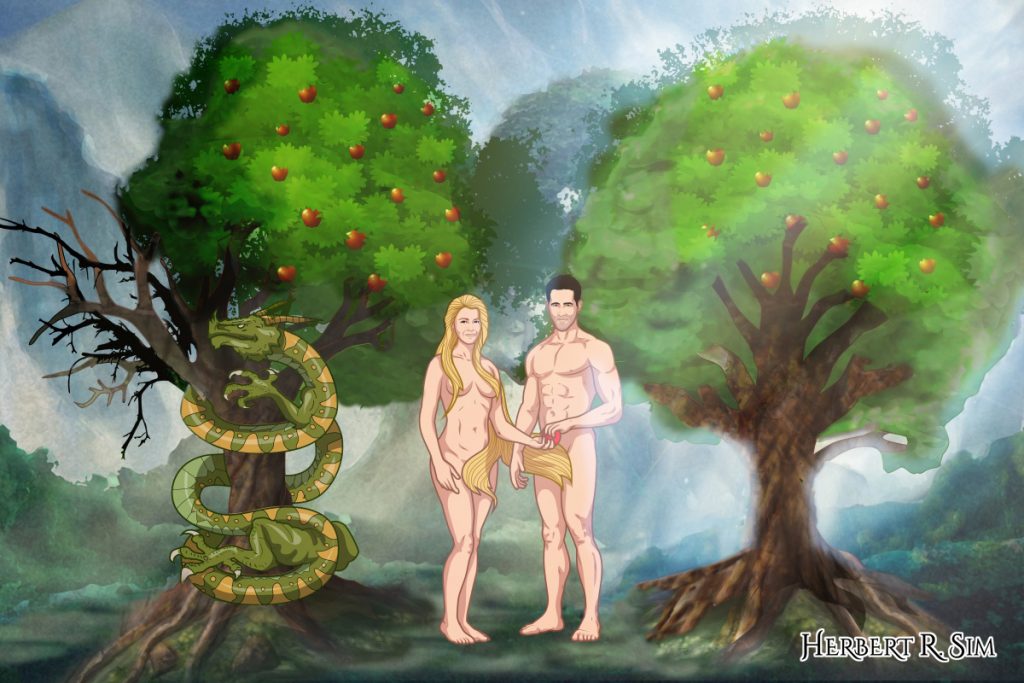 In my illustration, it also features two different trees in the background, the “tree of the knowledge of good and evil” and the “tree of life”. Also, if you notice carefully, I have also attempted to draw Adam and Eve to look like my favorite celebrity couple, Ryan Reynolds and Blake Lively. 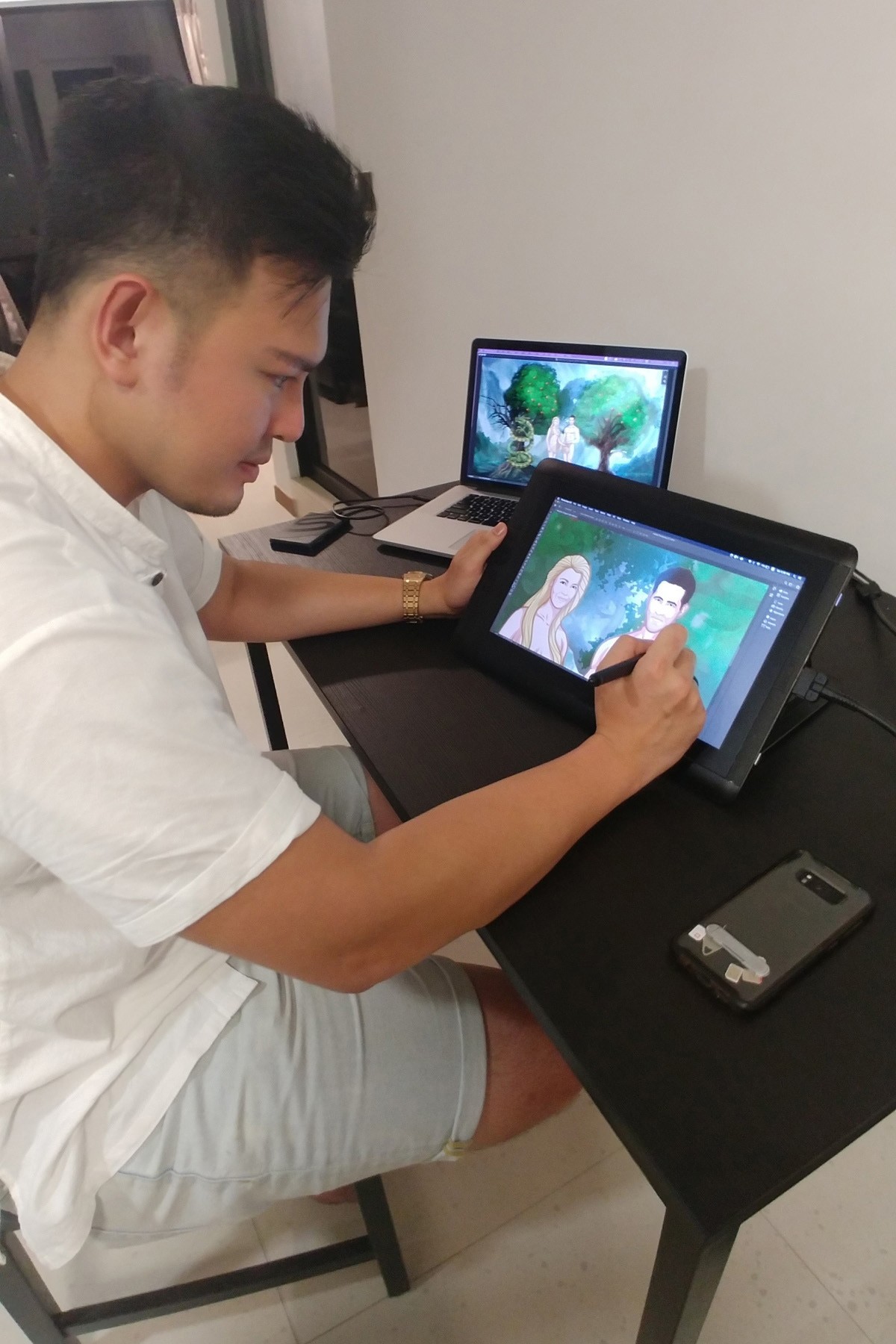 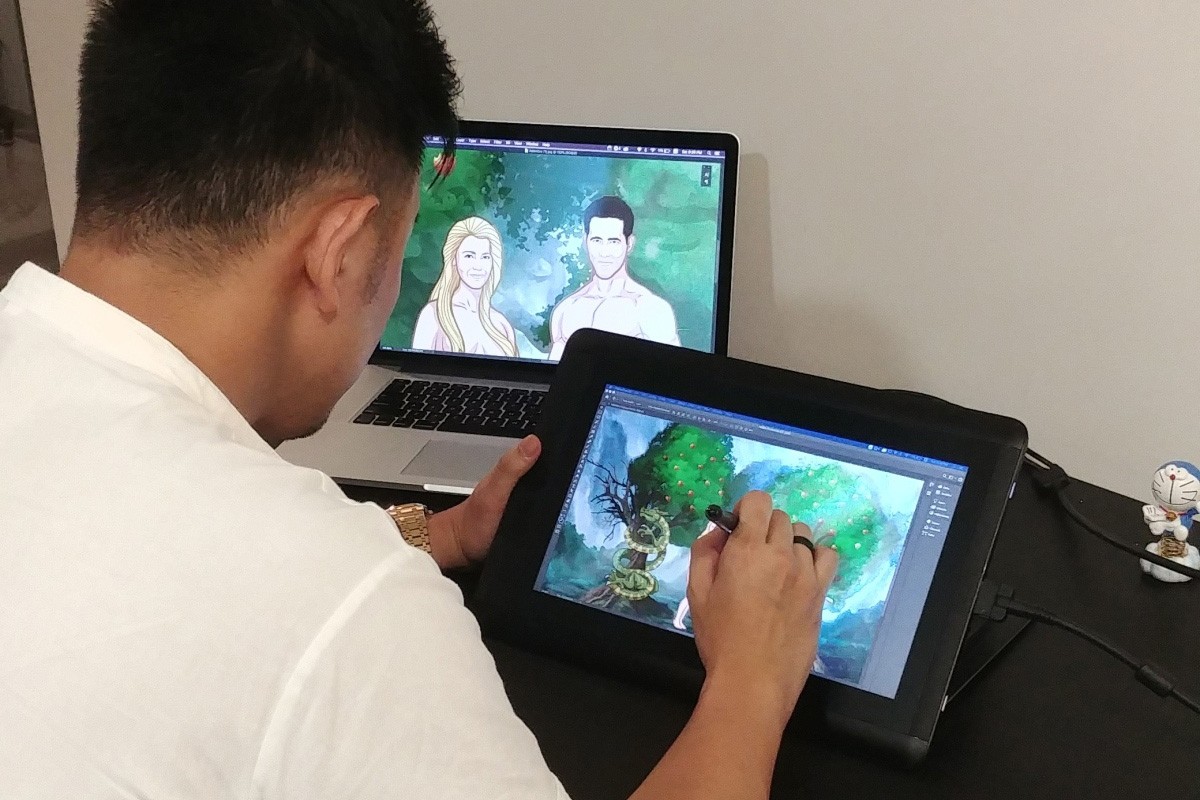