In my latest illustration, I attempt to illustrate an epic battle by the brave knight who wields the Blade of Bitcoin, against the ancient legendary Fiat Wolf Beast, you might remember from the beast’s first appearance here.

With the rise in popularity and use of cryptocurrencies, comparisons between bitcoin and fiat currencies have become inevitable as individuals, investors, businesses, governments and everyone in between take stock of what each brings to the table.

Fiat currency can be defined as “money” that a government decides has value. The “money” (i.e. notes and coins) itself has no intrinsic value; its value lies in what it represents. The word fiat is actually Latin for “it shall be.” After a government establishes that it will accept this representation of value in the form of a fiat currency such as the US dollar, it becomes what we call a medium of exchange for use in trade, commerce, finance and other purposes.

While fiat currencies are more established by virtue of having been around longer and being more commonly used at present, bitcoin is a more recent and revolutionary technology that allows people or institutions to transfer funds instantly, securely and without a middleman. Cryptocurrencies have the potential to expand international commerce, support financial inclusion, and transform how we carry out financial transactions.

Are fiat currencies on the way down and out in the midst of the cryptocurrency revolution?

The national and international banking and financial system that underwrites fiat currencies is often said to stand for stability. For example, the US Federal Reserve says its goal is “a more stable monetary and financial system.” Its counterpart across the Atlantic, the European Central Bank (ECB), has as its mission statement “to maintain price stability and to safeguard the value of the euro”.

But developments have not shown a system that is stable and reassuring. 2008 saw a mammoth banking crisis, the worst since the crash of 1929. In response, central banks around the world such as those from the US, China and Europe printed unprecedented amounts of money to shore up the banking system, while governments gave out bailout subsidies never seen before. In Europe, governments committed 1.3 trillion euros to prevent eurobanks from failing. This led to the 2011 sovereign debt crisis, which in turn was barely contained by the ECB.

Over the last 10 years, central banks have created new money to the tune of $14 trillion, an amount that continues to grow. Hardly a sign of a stable system that is functioning smoothly without significant, often vital, interventions from central banks and governments.

There are also historical examples of fiat currencies failing. In post-World War I, the only way Germany could repay its massive war debt was by printing more money. However, this caused inflation to skyrocket so much that it was cheaper to heat the furnace by using the fiat currency than to buy firewood with it. In the international currency market, the German mark weakened to the extent that the equivalent of one US dollar was 12 marks in 1919, but by 1923, that same U.S. dollar was equivalent to 4.2 trillion marks! This highlights the problems of debt levels and inflation that fiat currency systems are vulnerable to. 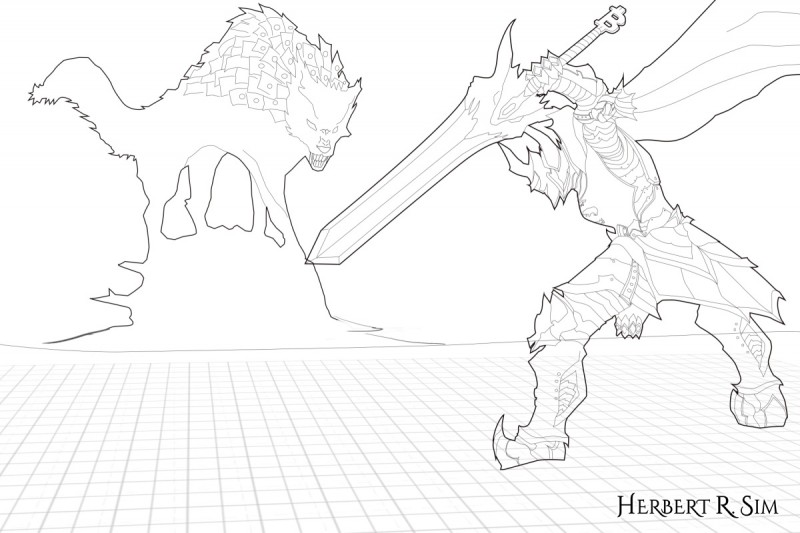 My initial sketch line-art which I entitled ‘Fiat Currency Beast Versus Bitcoin Knight’. You can see the strain of the knight balancing his weight out straining from lifting the heavy Blade of Bitcoin with one hand.

One of the most prominent features of bitcoin, or any other cryptocurrency, has to be its decentralised architecture which means it is not controlled by any singular government entity. Not having a central authority means no entity has the ability to inflate bitcoin’s price or devalue it by manipulating its supply. There is no risk of money printing by a government that could dilute one’s hard earned savings. Instead, creation of bitcoin happens at a stable rate and halves every four years, creating a limited supply of 21 million units.

In addition, there is no single point of failure with bitcoin. If the US Government were to fail one day, it would have devastating effects on the currency not just in the US but all over the world. Because bitcoin is a distributed network, if one part of it such as a bitcoin exchange or mining farm were to fail or go offline, bitcoin would be resilient enough by design to keep working.

In this digital age, sending money via the fiat system remains expensive, slow and insecure. According to Susan Athey, Economics of Technology Professor from Stanford University, “the way banks move money today is archaic. International bank transfers can take up to a week, with correspondent banks and country-specific clearing houses involved at both ends. Even the cross-border sharing of payment data faces challenges and frictions.” Using a cryptocurrency such as bitcoin could make bank transfers instant, cheap and safe. Bitcoin transactions can take just about 10 minutes to complete and can be initiated anywhere.

Bitcoin for All: Greater Financial Inclusion

In Africa, the proliferation of mobile technology has already shown that developing countries can lead when it comes to sophisticated technology. Estimates suggest that 60% or more of commerce in Kenya takes place using mobile phone credits as a medium of exchange. Anyone with a mobile phone can store money there and send credits to another user. The problem, as alluded to earlier with fiat systems, is that the fees are large, and cashing out has historically cost as much as 20%.

A cryptocurrency like bitcoin could become another safe and convenient form of payment in countries where most citizens do not have bank accounts or the usage of fiat systems is costly. While using bitcoin as a second currency in a country would expose citizens to a certain amount of currency risk, it might be better than the existing options, particularly in high-inflation countries.

Annually, migrants from developing countries perform remittances worth more than $500 billion, a sum that exceeds the foreign direct investment of some countries. With total fees for international transfers averaging 6-10% to send $200, the burden on some of the world’s most vulnerable people is substantial.

Technology such as bitcoin has the potential for these transfers to become faster and cheaper. Using cryptocurrency, private users could send money directly to their families via a mobile phone, with the only remaining fees being those charged by currency exchanges. 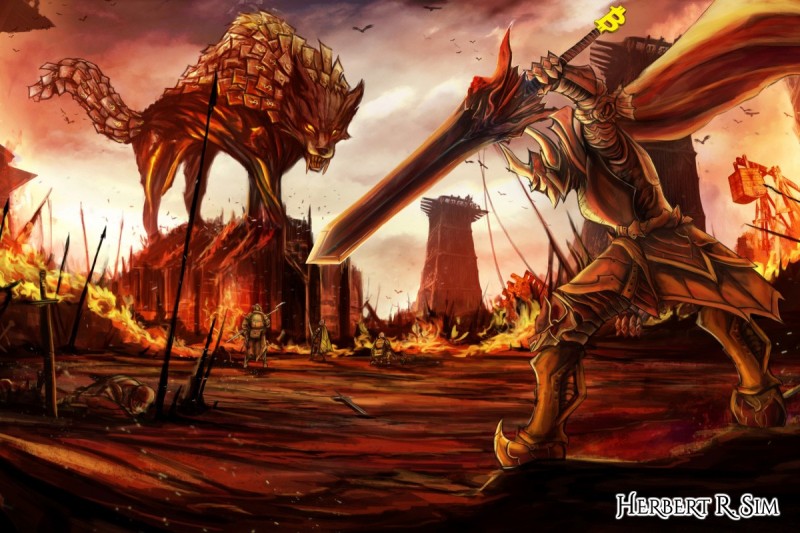 Final illustration of the ‘Fiat Currency Beast Versus Bitcoin Knight’, notice that I added a few other characters near the Fiat Wolf Beast to showcase the monstrous size comparison.

The comparison of fiat currencies and bitcoin notwithstanding, it may not be necessary to frame fiat currencies and cryptocurrency protocols in stark oppositional terms. An emerging and considered moderate view sees them coexisting as mutual optimizations of one another.

Bitcoin does not need to replace fiat currencies in order to be successful. It merely needs to remove the pain of, and add new value to, transferring currency in a safe, affordable and convenient manner. Another way Bitcoin can add value is being an alternative to gold as a store of value.

At the same time, fiat currencies do not need bitcoin to fail or see it regulated into oblivion in order to ensure their sustainability. Traditional economies can instead integrate crypto and other digital currency protocols to grow a stronger, safer, less expensive and more valuable hybrid economy. One that works for us all.