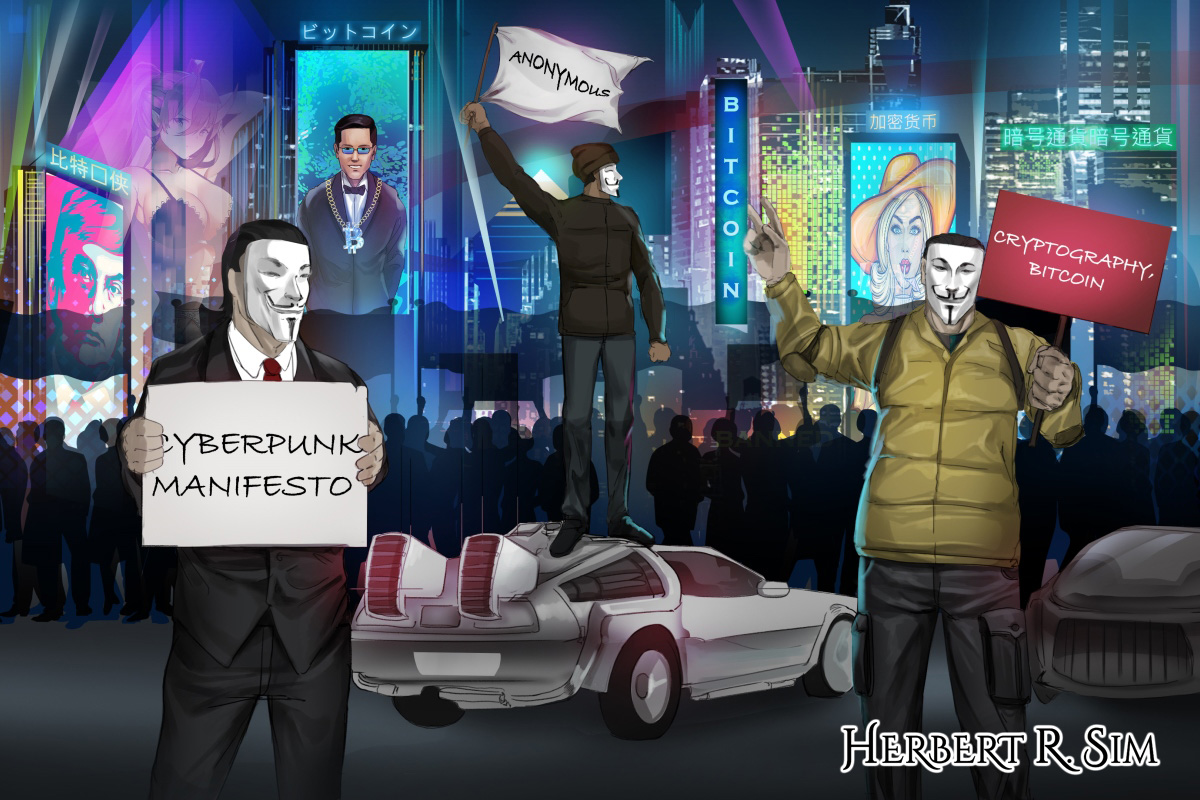 In my latest illustration, I feature Cypherpunk activists wearing Guy Fawkes masks during in a Million Mask march in a futuristic cyberpunk style art carrying sign ‘Anonymous’ and ‘Cypherpunk Manifesto’. You might also notice the ‘Back to the Future‘ car.

The topic of “Cypherpunks” pique my interest, and I’ve been researching and reading up on it for the past months. Cypherpunk (not to be confused with Cyberpunk), basically is any activist advocating widespread use of strong cryptography and privacy-enhancing technologies as a route to social and political change.

I still remember the first time I came across this during one of my classes last year, on my final year of my liberal arts bachelor degree studies in Oklahoma City University, where I was first introduced about this idealogy. I vividly remember feeling infuriated and excited about the idea of computer hackers coming up with codes to protect the privacy of ordinary citizens from the prying eyes of organizations and the possibility of government and covert agencies spying on the public.

Originally communicating through the Cypherpunks electronic mailing list, informal groups aimed to achieve privacy and security through proactive use of cryptography. Cypherpunks have been engaged in an active movement since the late 1980s.

I realize that there are not much media coverage nor mention about this topic online, I’ve been penning my thoughts here on my blog, and of course my art illustration, hoping to shed more light into this idealogy. In case you missed it:

The Cybersecurity of Cryptocurrencies: Constant Evolution

In the Beginning, There Was CypherPunks

What is Decentralization Actually About?

This position seems to be fast becoming cypherpunks dogma, but I don’t agree. The notion that we can just fade into cypherspace and ignore the unpleasant political realities is unrealistic, in my view.

Have people forgotten the Clipper proposal, with the possible follow-on to make non-Clipper encryption illegal? To the extent this proposal has been or will be defeated, it will happen through political maneuvering, not technology.

Have people forgotten the PGP export investigation? Phil Zimmermann hasn’t. He and others may be facing the prospect of ten years in prison if they were found guilty of illegal export. If anyone has any suggestions for how to escape from jail into cyberspace I’d like to hear about them.

Mike’s SecureDrive is a terrific program for protecting privacy. But if we want to keep keys secret from politically-motivated investigations, we have to rely on the very political and non-technological Fifth Amendment (an amendment which Mike Godwin of EFF and others contend does not actually protect disclosure of cryptographic keys). Again, we need to win political, not technological, victories in order to protect our privacy.

I even question Mike’s point about the government’s inability to ban books. Look at the difficulty in keeping PGP available in this country even though it is legal. Not only have FTP sites been steadily closed down, even the key servers have as well. And this is legal software.

Sure, this software is currently available overseas, but that is because PGP’s only legal limitations are the U.S. patent issues. Imagine how much worse it would be if non-escrowed encryption were made illegal in a broad range of countries, with stringent limits on net access to countries which promote illegal software? Here again, these kinds of decisions will be made in the political realm.

Fundamentally, I believe we will have the kind of society that most people want. If we want freedom and privacy, we must persuade others that these are worth having. There are no shortcuts. Withdrawing into technology is like pulling the blankets over your head. It feels good for a while, until reality catches up. The next Clipper or Digital Telephony proposal will provide a rude awakening.