Above is my sketch of the Million Mask March, with Russell Brand at the forefront leading the pack. “We are Anonymous. We are Legion. We do not forgive. We do not forget. Expect us.” — Anonymous (匿名者)

It was just a couple weeks ago that demonstrations in more than 400 cities had been planned as part of the event – billed as the “Million Mask March” – that coincided with Guy Fawkes Day.

Protesters wearing the white-faced Guy Fawkes masks that have become synonymous with the Occupy movement and the hacktivist grouping Anonymous have taken part in hundreds of gatherings around the world in opposition to causes such as corruption.

One of the largest protests of Tuesday night took place in central London, where the comedian and advocate of “complete revolution” Russell Brand was pictured among crowds of people wearing a Guy Fawkes mask.

One of a number of Facebook pages for the event described it as a “Call for Anonymous, WikiLeaks, the Pirate Party, Occupy and Oath Keepers to defend humanity”. It also added “Remember who your enemies are: billionaires who own banks and corporations who corrupt politicians who enslave the people in injustice.”

I believe that the introduction of Bitcoin is the first procedure in a greater transition to an “anarcho-capitalist society”. The digital currency would be an interesting experiment where its long-run success could revolutionize both the money system and how the governance should operate.

Once Bitcoin achieves success, I believe that the next step to a more significant change could then be planned and implemented. An “anarcho-capitalist society” will be formed more readily if software agents start replacing the current functionalities and services provided by centralized parties such as the government.

People should generally start investing in education, an aspect that has been neglected for too long, thus the founding of Crypto Chain University in 2010, to compile blockchain and cryptocurrency research papers, and making it decentralized, open-source, free-for-all to tap into the knowledge base.

Investors should put in efforts to obtain knowledge and do research by themselves in the crypto sector and crypto developers should also aid users by providing the required knowledge to operate certain software and hardware.

Timothy C. May, Cypherpunk (数码朋克) wrote in his “Crypto Anarchist Manifesto” that the usage of crypto allows the formation of a system which allow its users to interact with each other directly without the influence of the government.

May also criticized that crypto should be treated to be just another form of payment such as PayPal or Visa but should be seen as something entirely different. He further commented that the main uses of cryptocurrencies would be eliminated once the government attempts to regulate and restrict the market even more.

However, it is difficult to convince the government not to regulate the market, as crypto has undoubtedly become a tool exploited by criminals. If regulatory actions are not taken by the government, crypto would soon become the ultimate nest for motivated criminals for illegal activities.

“The corrupt fear us. The honest support us. The heroic join us.” — Anonymous

This messages touches on two topics of recent interest (to some) here:

Setting up payment systems for message transmission, to handle the issues of “mailbombing” and “flooding” in a more natural way (locality of reference, user of a service pays, avoidance of the “Morris Worm” explosion effects which could’ve happened with Detweiler bombed us, as Hal noted).
The general issue of “Cyberspace.” This lies at the root of some recent disagreements here, and is worthy of more discussion. Crypto will make this a very real cusp issue in the next several years.
Why debate it now? What could possibly come out of such a debate?

It happens that I’m reading a wonderful new book by Kip Thorne, entitled “Black Holes and Space Warps.” This is widely available in bookstores, in hardback only at this time. ($30, but it’s a whopping big book, and I got it at Barnes and Noble for $24. Speaking of Barnes and Noble, the Santa Clara store is selling Li and Vitanyi’s “Intro. to Kolmogorov Complexity” book for $44, before the 20% hardback discount, which may be a mispricingm, as I paid $60 for mine. Check it out if you’re interested….I think there were two copies.)

Thorne has spent 30 years studying gravitational collapse and black holes, and was a coauthor of the famed 1973 book on “Gravitation,” which I got to use in a Xeroxed form for my general relativity class in 1973.

The point? Thorne describes his involvement with Carl Sagan in working out the physics of time travel via wormholes. Thorne had an epiphany: however unlikely the engineering or financing of something is, there is something valuable to be gained in examining the absolute limits of what is possible without regard for engineering practicalities. Thus, he and his students looked into the implications of an extremely advanced civilization able to somehow hold open the mouth of a wormhole. The conclusions are fascinating and led to a new line of thinking about the structure of space-time.

The connection to crypto is this: Perhaps we should be thinking more about the implicaitons and effects of strong crypto, digital money, ideal remailers, etc., assuming that certain practical problems that bedevil us today are, or soon will be, solved. To some extent we already do this, as when we discuss Chaum’s ideal mixes in the same way engineer’s discuss ideal op amps–a useful abstraction of behavior in the limit that lesser, real world implementations can then be contrasted with.

And of course many of us have found Vernor Vinge’s “True Names” to be an excellent (and quickly readable) treatment of how things could work in a world of fast, cheap, and secure communication. Other writers have seen things differently (e.g., “Shockwave Rider,” “1984,” “Snow Crash”).

Here, to cut to the chase, are some brief statements of what I see as the “behavior in the limits.” I won’t elaborate on them right now. 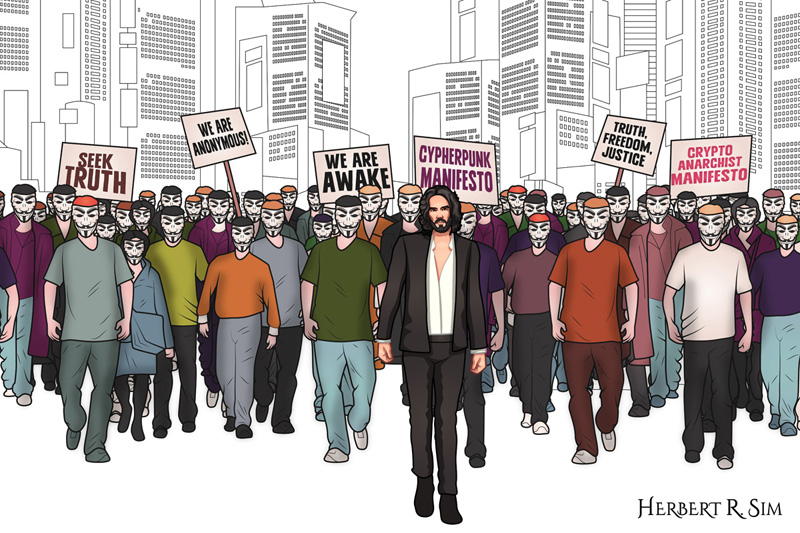 This is the “crypto anarchy” I have been writing about since 1988. Cyberspace will turn out to be a far vaster frontier than anything we have seen so far. With “only” 10^70 or so particles in the entire universe, there’s vastly more “space” (address space, key space, etc.) in even a relatively small set of digits. Cyberspace is mathematical space, and its spaciousness is truly unlimited.

And we’ll be moving our trade, our entertainment, and much of our lives into cyberspace a whole lot faster than we’ll be slowly moving into low Earth orbit and beyond. In fact, I consider that I’m already half-way in. In a few years, with Mosaic-like one-touch connectivity, with a plethora of network choices, with secure remailers and similar tools to anonymize my transactions, I’ll be so far in there’ll be turning back.

Enough for these remarks right now. I think it makes sense to take a slightly longer-range view of the inevitable trends, to see where we’re going, to see what issues need more work.

I hope some of you agree with me. 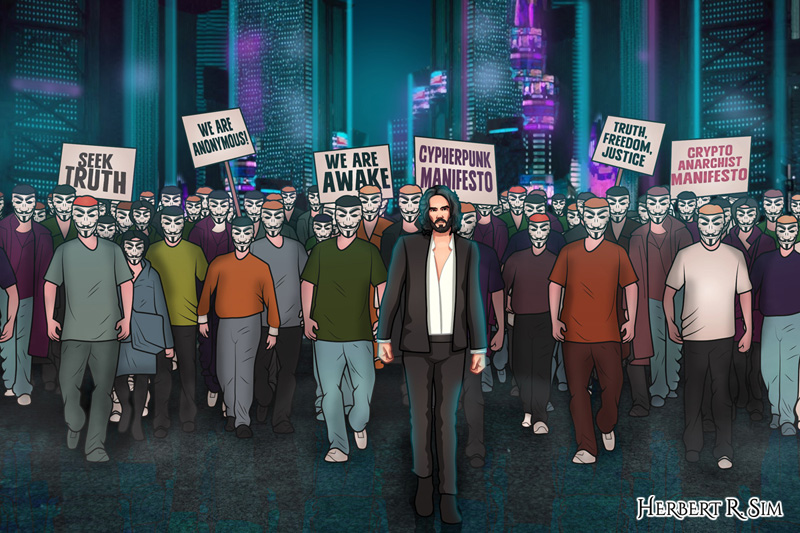 The above is my final illustration entitled ‘Cypherpunk Revolution: Anonymous’ Million Mask March’, in full color. The background is set in a futuristic cyberpunk city style.