The Confusion of Languages at the Tower of Babel 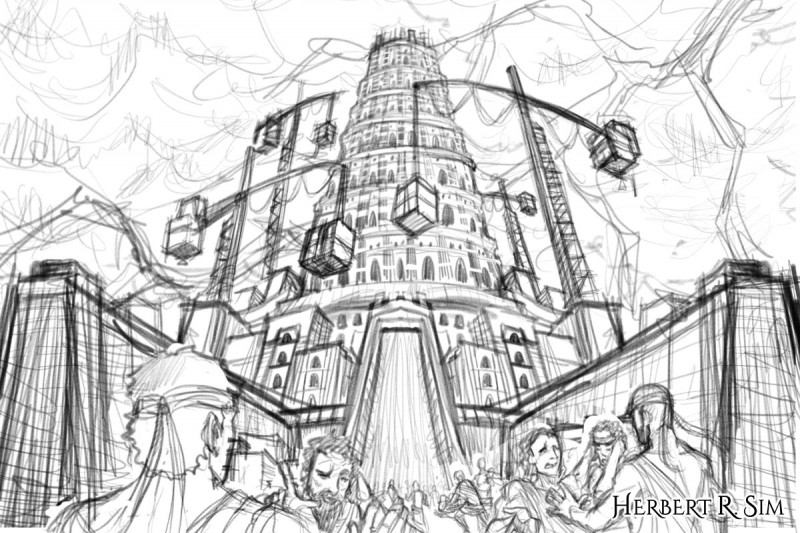 Above is my sketch of the renown ‘Tower of Babel’, as per in the Bible, the construction of the building was halted when God confused the languages of the people. I drew inspiration from church of the Sagrada Família, where construction is still in progress with the construction tools alongside.

If you examine the architecture of the building, I attempted to follow as closely as I could to the Etemenanki (Sumerian: “temple of the foundation of heaven and earth”), the name of a ziggurat dedicated to Marduk in the city of Babylon. It was famously rebuilt by the 6th-century BCE Neo-Babylonian dynasty rulers Nabopolassar and Nebuchadnezzar II. According to modern scholars, such as Stephen L. Harris, the biblical story of the Tower of Babel was likely influenced by Etemenanki during the Babylonian captivity of the Hebrews.

According to Genesis 11:1–9, the Babylonians wanted to make a name for themselves by building a mighty city and a tower “with its top in the heavens.” God disrupted the work by so confusing the language of the workers that they could no longer understand one another. The city was never completed, and the people were dispersed over the face of the earth.

The Tower of Babel

11 Now the whole world had one language and a common speech. 2 As people moved eastward, they found a plain in Shinar and settled there.

3 They said to each other, “Come, let’s make bricks and bake them thoroughly.” They used brick instead of stone, and tar for mortar. 4 Then they said, “Come, let us build ourselves a city, with a tower that reaches to the heavens, so that we may make a name for ourselves; otherwise we will be scattered over the face of the whole earth.”

5 But the Lord came down to see the city and the tower the people were building. 6 The Lord said, “If as one people speaking the same language they have begun to do this, then nothing they plan to do will be impossible for them. 7 Come, let us go down and confuse their language so they will not understand each other.” 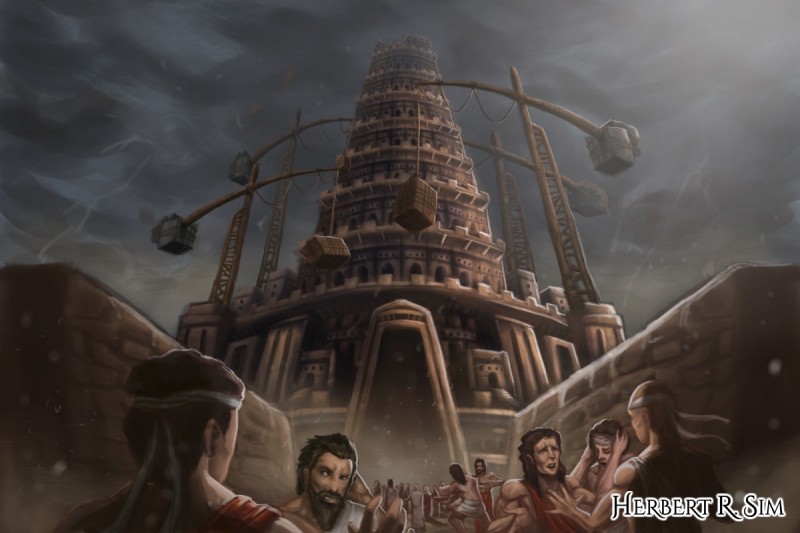 In the final illustration, you can see the construction tools – the cranes, are ancient styled. And the illustration focuses on the ‘confusion of the languages’ shown on the faces of the humans depicted.