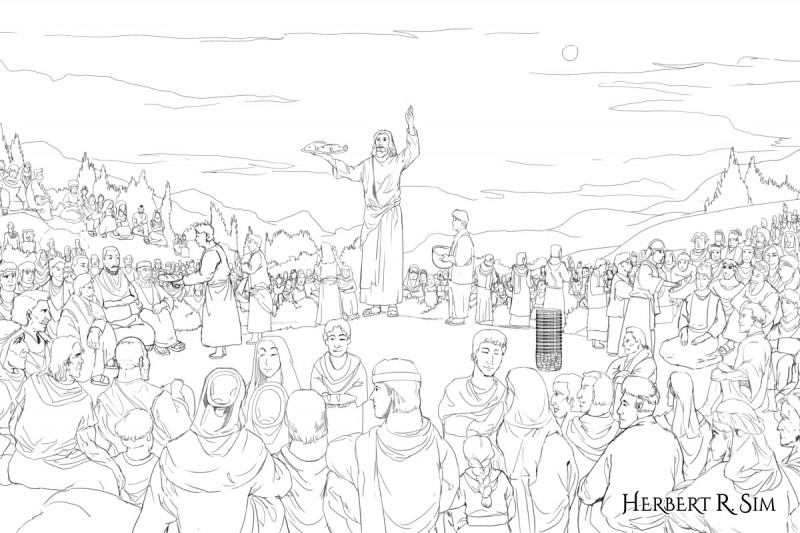 Above is my sketch illustration – Jesus Feeding the Multitude

Here in my latest illustration, I draw one of the seven miracles of Jesus. This miracle clearly showcases that “The Lord Will Provide” – Jehovah Jireh.

I’ve drawn this illustration a while back ago, but scheduling to publish it specifically today – 17/07/2017 on 1717 HOUR. This illustration ‘Jesus Feeding the Multitude’ features one of the seven notable events, often called “signs” or “miracles” by Jesus Christ, recorded in the Gospel of John in the Bible.

The seven signs are:

It is important to note that both Matthew and Mark record two different feedings of the multitude. The first feeding is of 5,000 people and the subsequent one is of 4,000:

When it was evening, the disciples came to him and said, “This is a lonely place, and the day is now over; send the crowds away to go into the villages and buy food for themselves.”… taking the five loaves and the two fish he looked up to heaven, and blessed, and broke and gave the loaves to the disciples, and the disciples gave them to the crowds… And those who ate were about five thousand men, besides women and children. – Matthew 14:13-21

Then Jesus called his disciples to him and said, “I have compassion on the crowd, because they have been with me now three days, and have nothing to eat; and I am unwilling to send them away hungry, lest they faint on the way.”… And commanding the crowd to sit down on the ground, he took the seven loaves and the fish, and having given thanks he broke them and gave them to the disciples, and the disciples gave them to the crowds… Those who ate were four thousand men, besides women and children… – Matthew 15:32-39

Why did Matthew and Mark include two miracles of the same kind? After all, if Jesus has already fed 5,000 people, what is really added to the Gospel story by including a second feeding of a smaller number? It seems odd. Wouldn’t it have been better to use that precious ink and parchment to record some different miracle?

Here is my work-in-progress combined into a gif, so you have an idea of the process and development work behind it all.

Okay, so the two miracles took place in different regions, so what? It’s important because the first region was Jewish (5,000) and the second region was Gentile (4,000). There are some numerical clues in the text which also point to this distinction (numbers in the Bible are rarely accidental)…

In this miracle, Jesus takes five loves and feeds five thousand, which is reminiscent of the five books of the Jewish Law (Genesis, Exodus, …). Not only that, but when everyone had finished eating, twelve baskets of left-overs were collected, which was probably alluding to the twelve tribes of Israel.

In this second miracle, seven loaves are used and seven baskets are collected. The number seven is symbolic of completeness (i.e. not just Jews but Gentiles too) and the number seven is evocative of the seven days of creation when God created all humanity.

So, what is the significance of two feedings of the multitudes? Both miracles show the provision of the Lord, His love for all His people, both Jew and Gentile. In these miracles He feeds them with miraculous bread, in preparation for the day when they would be fed sacramentally by His very own Body and Blood in the Eucharist.

Because there is one bread, we who are many are one body, for we all partake of the one bread
– 1 Corinthians 10:17 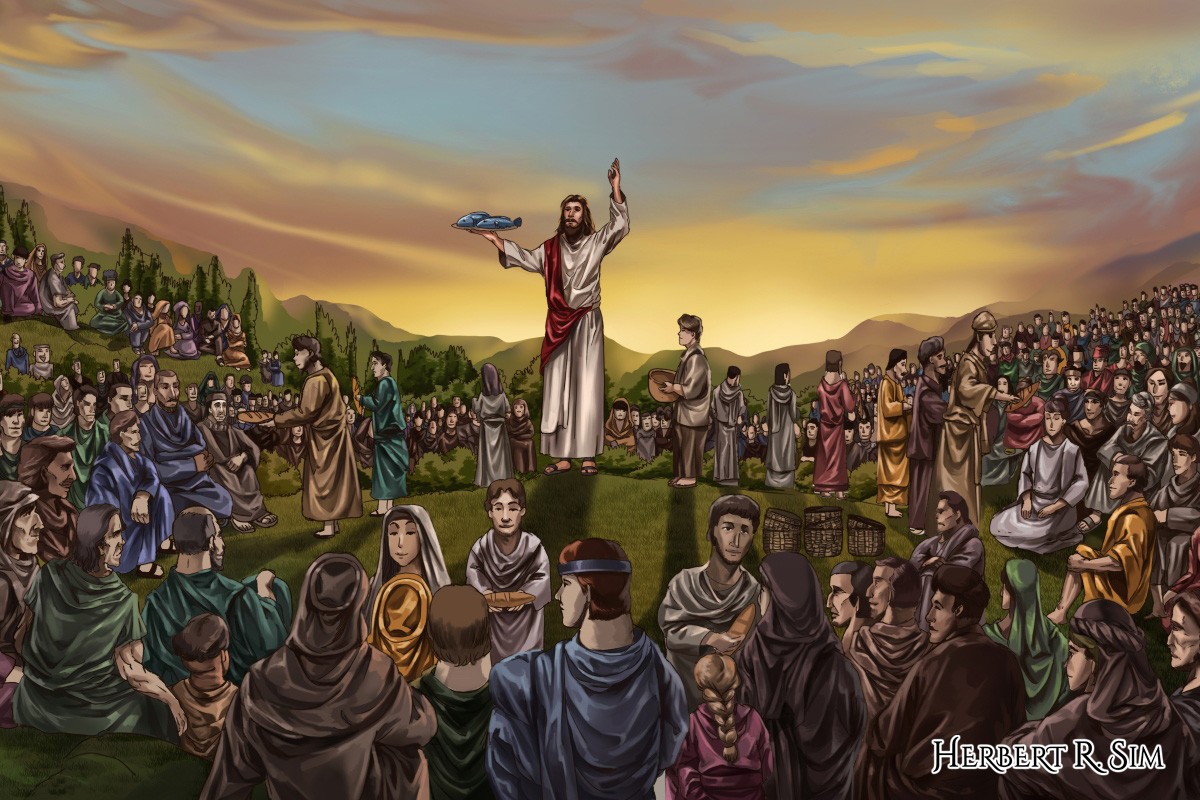 In my finished piece, I made sure to capture as much detail as I can – the disciples distributing the bread, while the boy standing beside Jesus who is giving thanks to God, with fish in one hand.