The Nephilim: Heroes of Old, Men of Renown

Inspired by the recent movie Noah (2014), earlier this year in March, which starred Russell Crowe, Jennifer Connelly, Anthony Hopkins and Emma Watson, I began producing this digital illustration to try to depict that period more accurately.

Producer Scott Franklin told Entertainment Weekly, “Noah is a very short section of the Bible with a lot of gaps, so we definitely had to take some creative expression in it. But I think we stayed very true to the story and didn’t really deviate from the Bible, despite the six-armed angels.”

This digital illustration is my rendition to depict that period of Genesis’ Noah’s period more accurately, for those who have not read the book of Genesis in the Bible.

I’ve also taken into the account from The Book of Giants an apocryphal Jewish book which expands a narrative in the Hebrew Bible. The Book of Giants is an antediluvian (pre-flood) narrative that was received primarily in Manichaean literature and known at Turpan. However, the earliest known traditions for the book originate in Aramaic copies of a Book of Giants in the Dead Sea Scrolls. Furthermore, references are found in: Genesis 6:1-4, 1 Enoch, and visions in Daniel 7:9-14. This book tells of the background and fate of these Nephilim in the flood.

Kevin Hall, Ph.D., professor of biblical and theological studies and the Ida Elizabeth and J.W. Hollums chair of Bible at Oklahoma Baptist University observed that “the story in Genesis is extremely concise, so some creativity with the tale—especially by Hollywood—is hardly a surprise.”

Before we go into clarification, it is imperative to read the passage directly from the Bible (New International Version), the story of Noah which starts from Genesis 6, all the way to Genesis 9:

Genesis 6 – Wickedness in the World

1 When human beings began to increase in number on the earth and daughters were born to them, 2 the sons of God saw that the daughters of humans were beautiful, and they married any of them they chose. 3 Then the Lord said, “My Spirit will not contend with humans forever, for they are mortal; their days will be a hundred and twenty years.”

4 The Nephilim were on the earth in those days—and also afterward—when the sons of God went to the daughters of humans and had children by them. They were the heroes of old, men of renown.

5 The Lord saw how great the wickedness of the human race had become on the earth, and that every inclination of the thoughts of the human heart was only evil all the time. 6 The Lord regretted that he had made human beings on the earth, and his heart was deeply troubled. 7 So the Lord said, “I will wipe from the face of the earth the human race I have created—and with them the animals, the birds and the creatures that move along the ground—for I regret that I have made them.” 8 But Noah found favor in the eyes of the Lord.

The story of Noah and the Flood starts from Genesis 6:9 onwards…

Read verse 2 of Genesis 6 above, the reference of “sons of God” have been interpreted to be fallen angels according to some classical Judaic explanations. Of which mated with humans, and the offsprings were “The Nephilim”, a.k.a “The Heroes of Old, Men of Renown”.

These Nephilims were the REAL reason for the flood as they were not of God’s creation but the creation of the rebelious angels that were casted out of heaven.

How tall were the Nephilims?

According to this image below via sott.net, it shows that The Nephilims were approximately 36 foot tall. 6 times the height of a normal human. 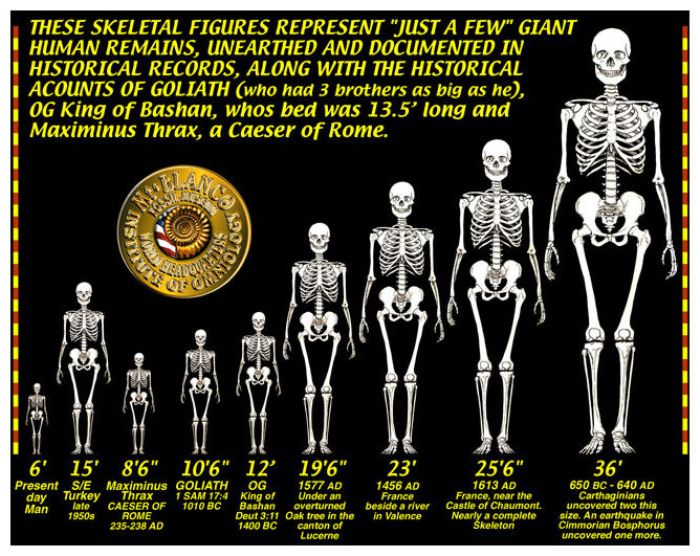 According to Numbers 13:33, they later inhabited Canaan at the time of the Israelite conquest of Canaan.

The Lord said to Moses, “Send men to spy out the land of Canaan, which I am giving to the Israelites” … So they went up and spied out the land … And they told him: “… Yet the people who live in the land are strong, and the towns are fortified and very large; and besides, we saw the descendants of Anak there.” … So they brought to the Israelites an unfavorable report of the land that they had spied out, saying, “The land that we have gone through as spies is a land that devours its inhabitants; and all the people that we saw in it are of great size. 33 There we saw the Nephilim (the Anakites come from the Nephilim); and to ourselves we seemed like grasshoppers, and so we seemed to them.”

“Yet it was I who destroyed the Amorite before them, whose height was like the height of the cedars and who was as strong as the oaks; I destroyed his fruit above and his roots beneath.” Above is my final illustration of The Nephilim: Heroes of Old, Men of Renown. You would notice that the height difference is approximately 6 times taller than that of the human.