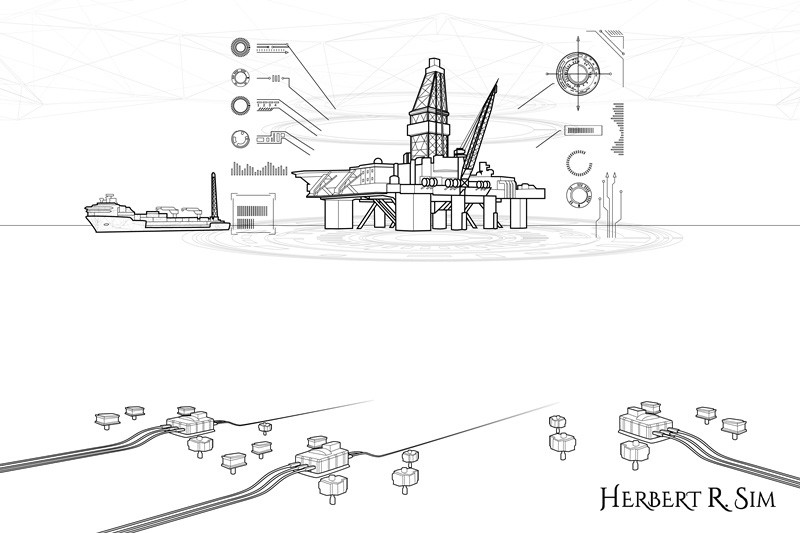 In my latest illustration, I put together and oil rig, oil tanker, and underwater pipelines. Inspired by computer games, I added in the specifications, showing the statistics breakdown of the oil rig itself.

Oil and gas executives prepare for the different ways blockchain is expected to disrupt the sector, analysts say.

Executives are stepping up their investments in blockchain on an industry-wide scale, as awareness of the platform becomes pervasive in the industry and companies begin to apply “deeper thinking” to its potential real-world use and applications, David L. Shrier, a lecturer and futurist at the Massachusetts Institute of Technology (MIT), said to Rigzone News.

“We have seen a rise in the number and sophistication of engagement around blockchain just within the past six months. It’s partly driven by more startup companies entering the market with products, and partly awareness about blockchain from more media coverage,” Shrier said. “Blockchain is a transformational technology on par with artificial intelligence in its potential scope and impact, and we expect to see the adoption trend to continue and accelerate in the next three to five years.”

Blockchain serves as a shared database that eliminates the role third parties play in transaction processes and information sharing in a number of ways. Technology, inventories, contracts, payments and other data is shared directly between parties with encrypted connections. Commodity exchanges on blockchain, for example, can support oil and gas trading directly between parties anywhere in the world, while removing the role banks, brokerage firms or other intermediaries have traditionally played.

Oil and gas executives began to show a wide-scale interest in blockchain as early as last year. According to a seminal Deloitte Consulting report published in 2016, for example, 55 percent of oil and gas executive surveyed already agreed blockchain is required to retain a competitive advantage, while 45 percent acknowledged its disruptive potential.

During a recent summit in Shanghai, Tyler Smith, head of blockchain’s rollout for BHP Billiton said the company uses blockchain to document its resource samples has replaced email and spreadsheet data logs with a single ledger, improving resource tracking, delivery tracking and other supply chain efficiencies.

In November, a consortium of oil and gas companies, including BP plc and Royal Dutch Shell plc, announced the creation of a blockchain commodity exchange. Trading on the blockchain platform is expected to begin by the end of 2018. Other participating companies include Statoil ASA, trading firms Gunvor, Koch Supply and Trading, and Mercuria; and investment banks ABN Amro, ING, and Societe Generale.

The consortium is residing under the Offshore Operators Committee and intends to carry out proofs of concept in order to investigate and apply the benefits of the blockchain, as well as contribute to worldwide adoption of the nascent technology.

Interestingly, the consortium represents the first initiative of its sort in the oil and gas industry in the United States, as per the press release.

It is to be noted that the founding members include Chevron and ExxonMobil, 2 of the world’s top ten largest oil and gas companies, based on 2017 revenues of $237 billion and $134 billion respectively. The board of Offshore Operators Committee also includes U.S.-based ConocoPhillips, Hess, Pioneer Natural Resources, Spanish Repsol, and Norwegian Equinor.

With the proposed consortium taking place, technology executives in oil and gas companies, globally, should look from the following four expertise offerings to decide how blockchain technology can benefit their company’s growth and overall activity:

The power of blockchain is that it could potentially hide confidential information to protect the interests of trading parties – pricing information, for example.

Does it work in the real world? Barclays reported the first blockchain-based trade-finance deal in September 2016. The transaction guaranteed the trade of almost $100,000 worth of cheese and butter between Irish agricultural food co-operative Ornua and the Seychelles Trading Company.

The process – from issuing to approval of the letter of credit, which usually takes between seven and 10 days – could be reduced to less than four hours. Other banks are also exploring ways blockchain technology can improve processes along the supply chain.

In August 2016, banking consortium R3CEV reported that 15 of its members had joined a trade finance trial to test its distributed ledger protocol, named Corda. Also in August, Bank of America, HSBC and the Infocomm Development Authority of Singapore (IDA) revealed that they had built a blockchain application to improve the letter of credit (LC) transaction process between banks, exporters and importers.

Blockchain, by design, should enable greater transparency and efficiency. Sharing digital blockchain information in joint operating agreements could reduce, if not eliminate, the need for reconciliations between companies and for data hubs controlled by third parties. The current processes for balloting partners on new projects, performing joint interest billing, and reporting production revenue could be completely disrupted. 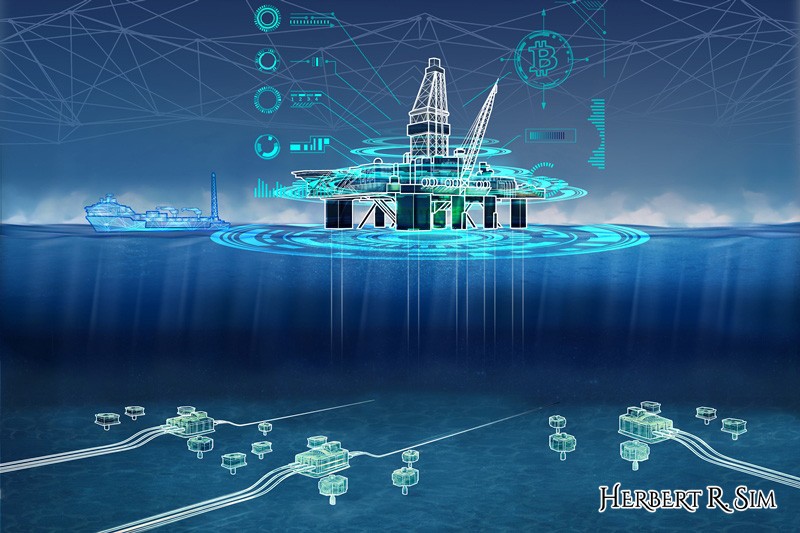 In the full colored final illustration above, “technology” is accentuated with the use of ‘electric blue’ neon color lines, signifying digital cyber style.

The flip side of anticorruption and transparency is data protection, specifically the use of new technology to ensure critical information remains safe. Internet of things-connected sensors can gather and provide critical information, such as real-time conditions for an undersea oil field operation, but these sensors are currently among the most insecure areas of a company’s network. Even a company’s core IT functions are vulnerable to hacking.

Solutions built on blockchain can aid in these areas. MIT ENIGMA, for instance, was designed to be more secure than existing solutions for storing and encrypting sensitive data such as biometric identity in tiny fragments. Storing data in fragments at multiple sites, rather than concentrating it in one place, also raises the prospect of enhanced data security even without a fully encrypted system.

According to tech publication WIRED, the sheer size and volume of contracts and transactions to execute capital projects in oil and gas have historically caused significant reconciliation and tracking issues among contractors, subcontractors, and suppliers, with significant challenges in managing logistics for supplies, tracking costs, and deploying inventory.

Drafting agreements that afford new tracking, bookkeeping, and automation methodologies could create a more efficient supply chain, improve capital project spend analytics, and simplify contractual obligations. Simply put, knowing who gets paid what, why, and where; who is owed money; and who along the chain is performing as explicitly mandated by agreements is potentially game changing.

Blockchain technologies are beginning to disrupt and open up energy trading markets. Boundaries between asset classes could blur as cash, energy products, and other commodities become digital assets trading interoperably.

By trading physical commodities on a blockchain solution, commodity traders could benefit from increased speed of exchange, improved availability of data, and enhanced reliability and auditability as records are verified in near real-time. Ultimately, this could result in minimising transaction backlogs and overall costs.

While blockchain may allow for more transparent and dynamic pricing, such pricing mechanisms, based purely on market demand, may miss the subtleties of how creative works are also valued based upon their cultural, societal, or political value. This could lead to further commoditisation of creative works. How blockchain can digitally ascribe these subtleties to creative works remains to be seen.

Blockchain holds enormous potential to break down barriers that could lead to more efficiency, greater accountability, lower costs, and increased remuneration for artists. To reap these benefits, however, the technology will need to be developed responsibly within the right regulatory frameworks.

“We need to fund centers of competency around blockchain technology that cut across agencies and functions, develop the talent to understand blockchain, and encourage regulators to co-create the solutions using blockchain,” says Brian Behlendorf, executive director of the Hyperledger Project at Linux Foundation in an interview with Harvard Business Review.