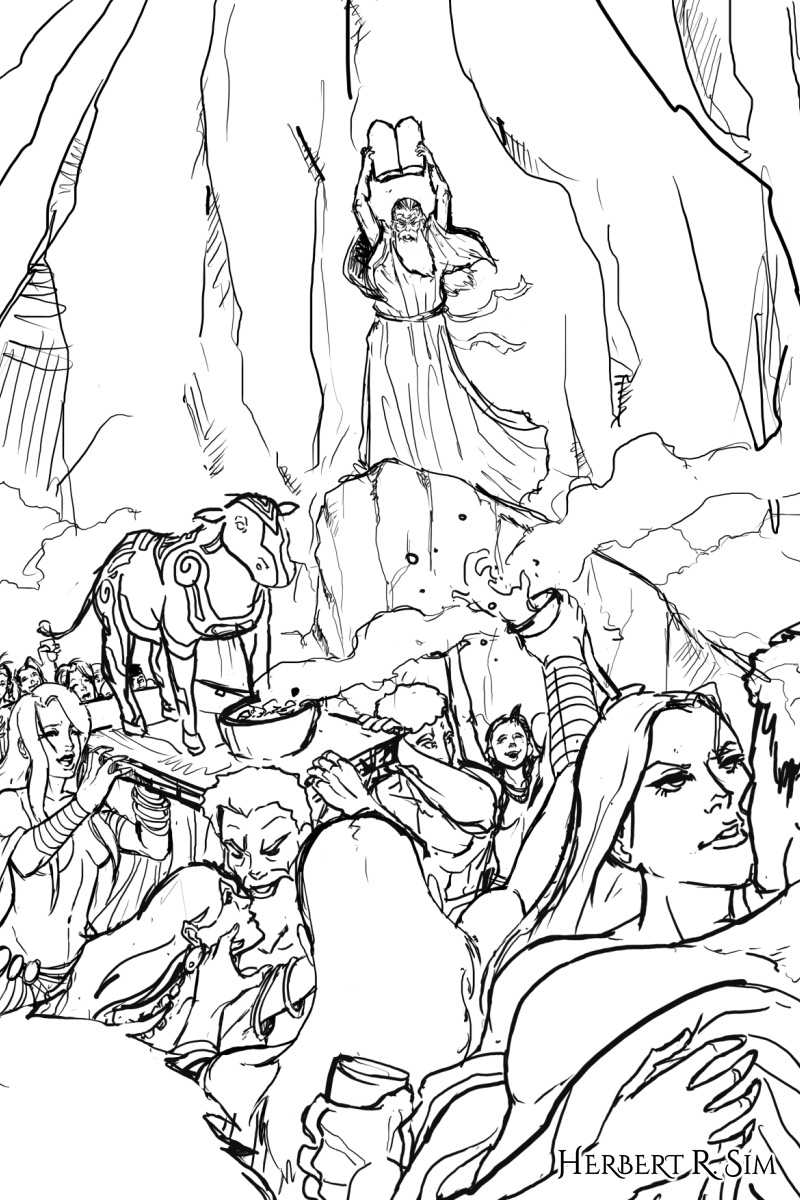 I depict a scene where Moses Breaks the Ten Commandments Tablets

1 Now when the people saw that Moses was delayed in coming down from the mountain, they gathered around Aaron and said, “Come, make us gods who will go before us. As for this Moses who brought us up out of the land of Egypt, we do not know what has happened to him!”

2 So Aaron told them, “Take off the gold earrings that are on your wives and sons and daughters, and bring them to me.”

3 Then all the people took off their gold earrings and brought them to Aaron. 4 He took the gold from their hands, and with an engraving tool he fashioned it into a molten calf. And they said, “O Israel, these are your gods, who brought you up out of the land of Egypt!”

5 When Aaron saw this, he built an altar before the calf and proclaimed: “Tomorrow shall be a feast to the LORD.”

6 So the next day they arose, offered burnt offerings, and presented peace offerings. And the people sat down to eat and drink, and got up to indulge in revelry.

7 Then the LORD said to Moses, “Go down at once! For your people, whom you brought up out of the land of Egypt, have corrupted themselves. 8 How quickly they have turned aside from the way I commanded them. They have made for themselves a molten calf and have bowed down to it. They have sacrificed to it and said, ‘O Israel, this is your God, who brought you up out of the land of Egypt.’”

9 The LORD also said to Moses, “I have seen this people, and they are indeed a stiff-necked people. 10 Now leave Me alone, so that My anger may burn against them and consume them. Then I will make you into a great nation.”

11 But Moses entreated the LORD his God, saying, “O LORD, why does Your anger burn against Your people, whom You brought out of the land of Egypt with great power and a mighty hand? 12 Why should the Egyptians declare, ‘He brought them out with evil intent, to kill them in the mountains and wipe them from the face of the earth’? Turn from Your fierce anger and relent from doing harm to Your people. 13 Remember Your servants Abraham, Isaac, and Israel, to whom You swore by Your very self when You declared, ‘I will make your descendants as numerous as the stars in the sky, and I will give your descendants all this land that I have promised, and it shall be their inheritance forever.’”

14 So the LORD relented from the calamity He had threatened to bring on His people.

Moses Descends with the Tablets

15 Then Moses turned and went down the mountain with the two tablets of the Testimony in his hands. They were inscribed on both sides, front and back. 16 The tablets were the work of God, and the writing was the writing of God, engraved on the tablets.

17 When Joshua heard the sound of the people shouting, he said to Moses, “The sound of war is in the camp.”

“It is neither the cry of victory

nor the cry of defeat;

I hear the sound of singing!” 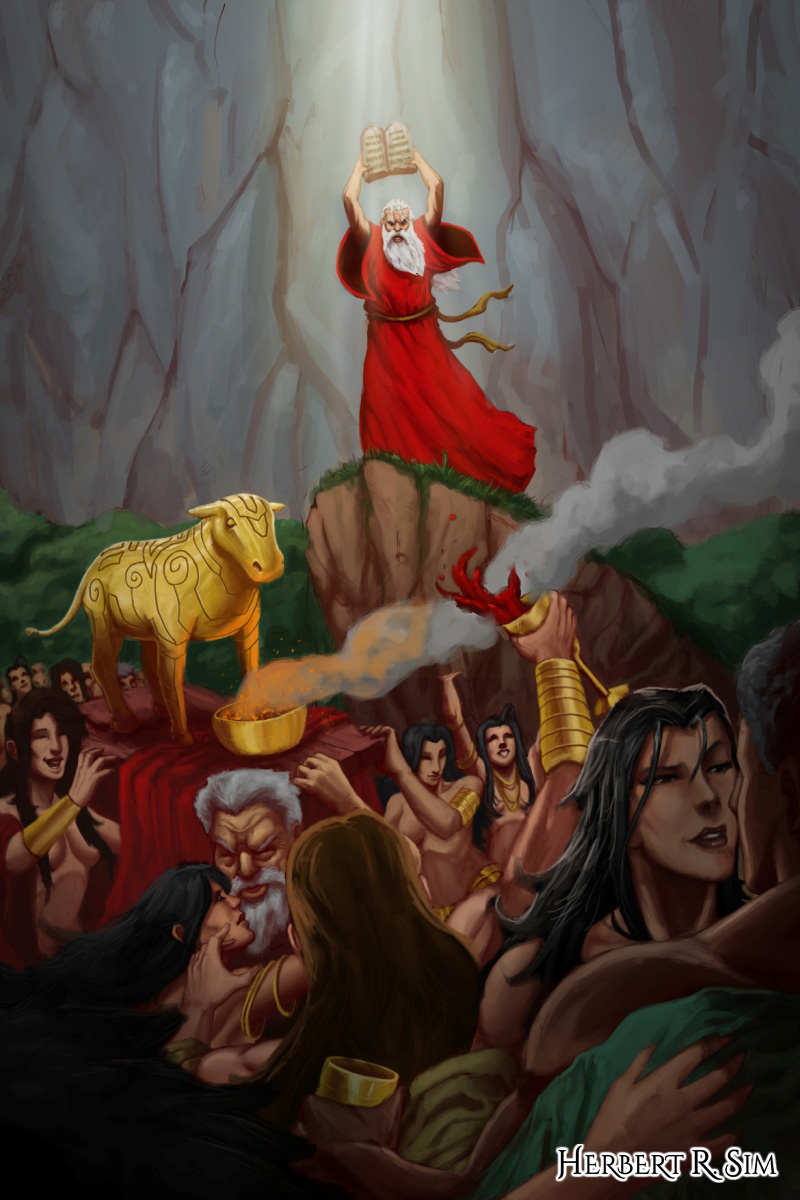 I depict the scene where the Israelites were indulging in revelry.

19 As Moses approached the camp and saw the calf and the dancing, he burned with anger and threw the tablets out of his hands, smashing them at the base of the mountain. 20 Then he took the calf they had made, burned it in the fire, ground it to powder, and scattered the powder over the face of the water. Then he forced the Israelites to drink it.

21 “What did this people do to you,” Moses asked Aaron, “that you have led them into so great a sin?”

22 “Do not be enraged, my lord,” Aaron replied. “You yourself know that the people are intent on evil. 23 They told me, ‘Make us gods who will go before us. As for this Moses who brought us up out of the land of Egypt, we do not know what has happened to him!’

24 So I said to them, ‘Whoever has gold, let him take it off,’ and they gave it to me. And when I cast it into the fire, out came this calf!”