Blockchain: Towards a Smart and Sustainable Energy Future 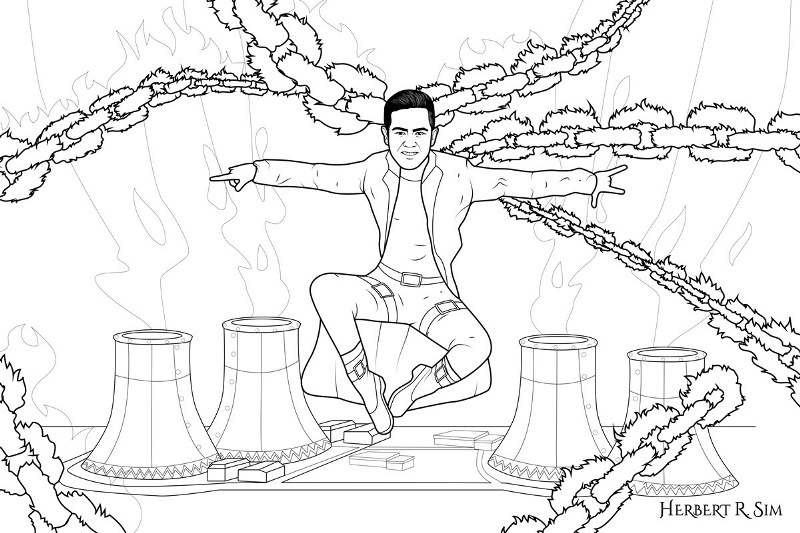 This illustration sketch above is inspired by Matrix’s Trinity jump kick, featuring my persona ‘The Bitcoin Man’ dressed in Neo’s costume.

As blockchain makes steady strides in changing the foundation of economic and social systems, the market for this versatile ledger technology is expected to be worth more than US $3 trillion by 2024. Over the last 5 years, venture capitalists have invested more than $1 billion into blockchain companies, underlining its market potential. Energy is one area where blockchain applications are gaining traction, as I previously discussed earlier in 2016.

Energy consumption is expected to increase by more than 40% globally over the next 25 years, with demand in some parts of the world possibly exceeding 100% in that time. This entails an increase in competition for resources and higher costs. In such a context, energy efficiency will become ever more important. In addition to a shift in the energy mix from fossil fuel-based to renewable, there is a concomitant change in the energy distribution structure with the burgeoning of distributed energy. Issues such as environmental sustainability, energy security and economic viability are effecting a shift in technology, policy and consumer choices.

In response, players in the energy sector, and even governments like that of Chile, continue to explore and develop blockchain applications for the energy grid to address these issues. Blockchain innovation occurs against the backdrop of pertinent trends in the energy sector including Distributed Energy Resources (DER), prosumerism and smart meters.

According to the traditional 20th century model of energy distribution, large power plants fuelled by fossil fuels generated electricity that was distributed via a centralised grid; power flowed in one direction from plant to consumer.

The landscape has since changed with the emergence of DER – a source of decentralised, community-generated energy that has diversified the electric grid, adding new sources of energy generation and multi-directional flows of power and data among producers, suppliers and consumers. Large-scale solar and wind farms are supplying an increasing proportion of power.

In tandem with DERs, a new category of energy stakeholders known as ‘prosumers’, or producer-consumers, are revolutionising the way the energy market works from the bottom-up. Prosumers portend a new model of energy distribution that can dramatically change the role of the consumer and communities, transforming ‘passive’ users into ‘active’ players with the dual role of producers and consumers.

A prosumer in a DER can be composed of households or aggregated into communities based on microgrids. This arrangement requires smart meters which allow two-way communication and power transfer between the prosumer and the energy supplier/ energy buyer. 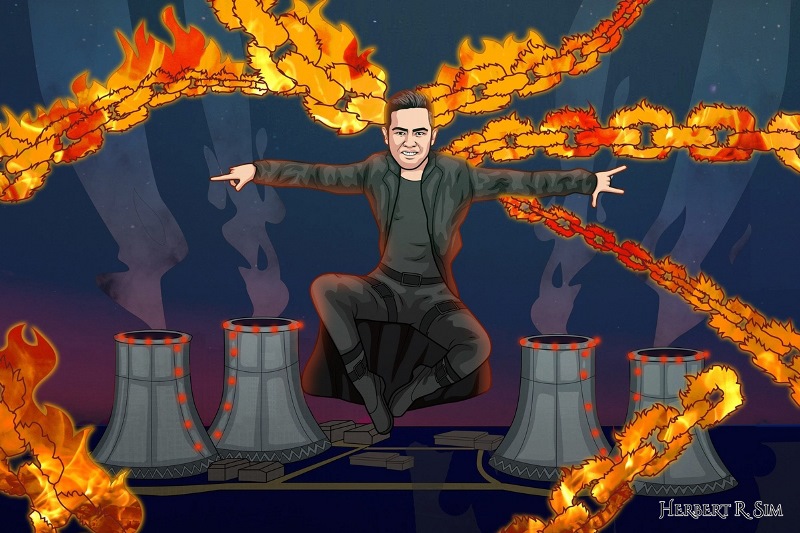 My persona ‘The Bitcoin Man’ in full color, in mid-air, with the chains of fire, represents energy, and block’chain’, pun-intended.

Smart meters will enable greater data richness and new applications, opening new opportunities for blockchain applications in decentralised energy markets. According to strategy firm Fintricity, a prospective blockchain use case in a prosumer context could be the creation of local energy clubs – a private blockchain network which connects prosumer members on an accounting level. In an energy club, electrons can be sent between club members and the amount of energy consumed (kWh) can be registered in real-time for accounting purposes.

Instead of trading energy directly, energy units are credited or debited in the blockchain ledger of the private blockchain network (i.e. the energy club), essentially creating a bartering economy where energy units are traded between club members. If the energy club members cannot balance their own supply/demand among themselves, they can then access the general grid in order to cover any imbalances.

In addition, third parties can act as a validator of club member activities and support energy providers in order to ensure that the energy market within the club is in order, similar to how central banks act as a last resort lender within a monetary system.

Blockchain start-ups such as KWHCoin are looking to make an impact in the renewable energy space by similarly leveraging on DER, smart meters and other sensors. KWHCoin aims to build a decentralized network of energy resources by connecting them through blockchain technology. It is a blockchain ecosystem and cryptocurrency backed by units of clean and renewable energy.

Physical units of kWh energy are leveraged from multiple sources including smart meters and sensor readings. This measurable output is then tokenized on the blockchain to create KWH tokens. Through the benefits of blockchain, KWHCoin would be able to give energy users the freedom to choose their energy sources and providers, as well as to become prosumers by selling their own renewable energy. A consortium of Japanese technology and energy firms is working on a similar project to allow consumers in rural areas to trade renewable energy through a blockchain platform.

One such utility is Japanese energy provider Remixpoint, where customers reportedly get discounts for choosing cryptocurrencies to pay their bills. One advantage of this arrangement is that customers are not even required to have bank accounts. Only internet access and digital wallets for storing cryptocurrencies are needed, fittingly representative of an energy future powered by blockchain that is smart and sustainable.

Transaction fees are almost Free – at only 0.02% per transaction. A fraction (10%) of what other top exchanges are charging.

The illustration in GIF, with focus on the chains – emphasizing on the energy and block’chain’.