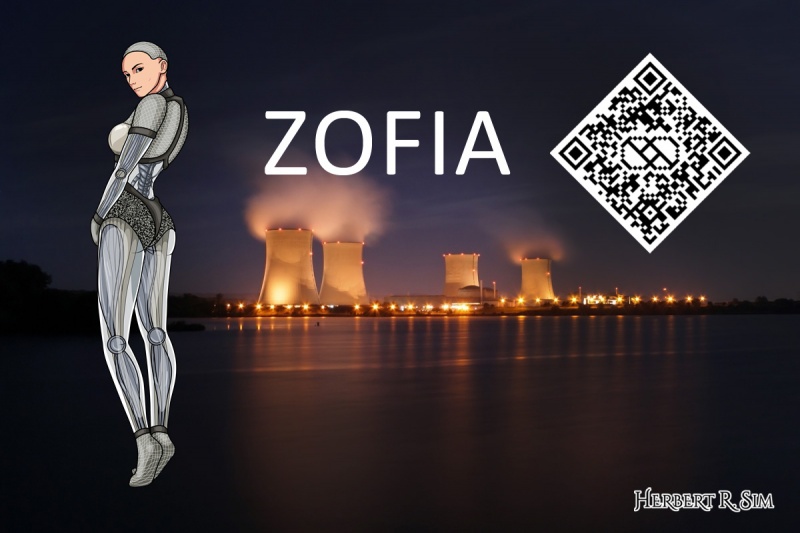 Imposing an illustration of mine from 2015, onto a nuclear plant facility wallpaper entitled “Atomkraftwerk Cattenom“.

As I discussed in my previous article in 2014, nuclear energy has long been in the energy mix of many countries along with other energy sources. Despite the Fukushima accident, nuclear continues to be considered a reliable, affordable, efficient and carbon-friendly form of energy generation. An energy source that can contribute to meeting the demands of economic growth and a burgeoning middle class, particularly in Asia.

The production of nuclear energy in nuclear power plants is highly dependent on knowledge and innovation in various disciplines of science and technology. From extracting and processing nuclear raw materials, to the nuclear fission process, and operating a nuclear reactor, scientific and technical expertise is indispensable to the nuclear enterprise.

In the age of the 4th Industrial Revolution, artificial intelligence (AI) and automation are increasingly being introduced into the nuclear energy equation as the industry looks to incorporate innovation that enhances the efficiency and safety of nuclear plants.

The idea of incorporating AI technologies in nuclear plants is not new. Among many examples in scientific literature, this is illustrated by a conference paper from 1987 written by a scientist from the Oak Ridge National Laboratory, the renowned US government-funded science and technology laboratory.

The author of the paper states that a nuclear power plant is too complex a system to be managed or operated by anyone’s “gut feeling”. An “expert system” can be the always-alert and knowledgeable assistant to human operators as well as a valuable tool for plant management.

The author predicted the inevitable automation of most functions in a nuclear plant given the demands for greater safety margins, lower environmental impacts, increased performance, and greater investment protection.

And in turn, the pace of automation will be determined by the ability to develop the required software through the use of modern computer science brought about by AI programming techniques.

Having taken stock of early developments, what is the state of emerging AI applications in the nuclear industry today?

EDF Energy, one of the UK’s largest energy suppliers with a network of nuclear, coal and renewable power facilities, is looking to tap on AI to increase the efficiency of its nuclear plants. EDF has a research and development department which focuses on digital innovation and designs proof of concepts for new technologies.

EDF is aiming for a number of AI use cases across its businesses. Plans are afoot for it to use AI for predictive maintenance in nuclear plants. According to David Ferguson, head of digital innovation at EDF, this involves collecting data from sensors around the plant to identify why a component fails and then predicting when it could happen.

Another use case could come from using AI for real-time condition monitoring in the plant to provide advice to human operators. This involves the AI monitoring different systems within the plant and providing either real-time “advice, prescribing what they should do, or, in the future, automating the power station”, said Ferguson.

Even in Japan, AI is making headway in helping its largest utility provider TEPCO (Tokyo Electric Power Company Holdings Inc), which veered close to bankruptcy following the Fukushima accident in 2011.

Despite the adverse impact on nuclear energy in Japan in the aftermath of the accident, TEPCO places importance on keeping up with new technologies such as AI, while working hard to regain the trust of the public.

Much like EDF, there are plants for TEPCO to use AI and big data analytics to carry out maintenance of nuclear infrastructure. According to Hirokazu Yamaguchi, Executive General Manager of Global Innovation and Investments at TEPCO, there are plans to start a proof of concept for predictive maintenance. Various data types such as weather data, sensor data and temperature can be used to analyse the risk of breakdowns in plants.

Safety is an integral mantra in the nuclear industry, especially at a time when the world’s nuclear energy facilities are showing their age. Nearly 15% of nuclear plants around the world are operating beyond their initially predicted lifespan of 40 years. More than a third of plants in the US fall into this category, according to the World Nuclear Industry Status Report.

That said, detecting cracks in nuclear plants is not easy. Because reactors are underwater, inspectors are unable to examine them directly. Instead, video from inspection cameras of reactors is scrutinised to spot cracks in the plant’s metallic surfaces.

Mohammad Jahanshahi, a civil engineering professor at Purdue University, has come up with a better way – automated crack detection in nuclear plants with deep learning algorithms and machine learning technologies.

The system, called CRAQ (crack recognition and quantification), offers an innovative solution by fusing information from multiple video frames to find changes in the texture of the steel that might indicate cracks. The video makes it possible to view cracks under different lighting conditions and at different angles.

These innovations aside, there has been debate on whether introducing AI and automating aspects of a nuclear plant operations would open it up to new risks. When it comes to automation, there are concerns over the loss of human agency and whether AI can do a good enough job. However, nuclear industry professionals such as David Ferguson, referring to EDF’s own AI initiatives, said it is important to note that “we are not talking about a self-driving nuclear power station at this stage.”

The nuclear industry is highly regulated and has safety strategies built on multiple layers to ensure the safety of the system as a whole. Becoming reliant on a single AI tool is not suited to the nature of nuclear plants.

However, with the increasing digitisation, automation, and proliferation of data in the operation of nuclear plants, there is a need to guard against new cyber risks, be it from new devices, software or algorithms.

Nuclear plants, with or without AI, have long been a target of hackers for various reasons. For example, in June 2017, it was reported that a US nuclear facility was breached in a cyberattack. In fact, cyberattacks have affected “multiple nuclear power generation sites this year”, according to news outlets.

Even as AI-driven innovations are implemented in nuclear plants to help make them more efficient and safer, it is absolutely vital that the cyber risks are addressed, and that new technologies that can make an important impact on power generation do not become a weak link.