Artificial Intelligence and the Brain: Can Machines Think? 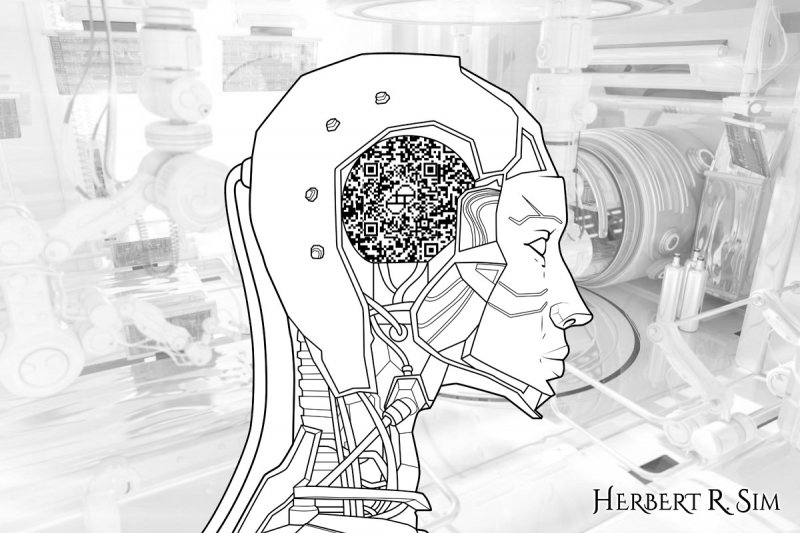 In this illustration, I superimposed my illustration of an Artificial Intelligence Robot onto a wallpaper of a futuristic laboratory.

The pursuit of the development of artificial intelligence is thought to have its origins in a question that Alan Turing, the progenitor of computing and artificial intelligence, posed in a seminal paper titled in 1950. That fundamental question was: Can machines think? And it is one I previously considered in relation to AI and smartphones.

Moving from AI in consumer devices and other fields such as cryptocurrency and blockchain, to the ultimate intelligence that is the human brain, it is worth considering the development of AI in the context of human intelligence and consciousness. Will we one day in the future actually see Skynet, the fictional artificial superintelligence and neural network-based consciousness that plays the menacing antagonist in Hollywood’s Terminator franchise? Could the day come when AI gains self-awareness, thinks and feels like a human being, and acts on its own free will?

The answers to these important questions could lie in the concept of the technological singularity, which is the school of thought among some futurists and technologists that the creation of an artificial superintelligence will push the world past a tipping point where the accelerating pace of increasingly smarter machines will exceed all human capabilities. Ray Kurzweil, one of the world’s leading thinkers, futurists and inventors, is one such proponent of the singularity and even famously calculates that the singularity will arrive around 2045.

But before we get ahead of ourselves, it would be wise to take a look at where we currently are in terms of creating AI that understands the capabilities of the complex human brain and can mimic it.

The basic building block of AI or any other area of technology is the algorithm, which refers to a detailed series of instructions for carrying out an operation or solving a problem. It is commonly used for data processing, calculation and other computer and science-related operations.

In cracking the code that is the human brain, there is a theory that human intelligence stems from a single algorithm. The theory stems from experiments which suggest that the portion of the brain dedicated to processing sound from your ears could also handle sight for your eyes. While this is possible only while your brain is in the earliest stages of development, it implies that the brain is essentially a general-purpose machine that can be tuned to perform different tasks.

The single algorithm theory has inspired the field of computer science research known as Deep Learning which seeks to build machines that can process data in much the same way the human brain does.

With technology giants like Google and Apple involved, this ground-breaking movement seeks to fuse computer science with neuroscience by building neural networks, which mimic the behaviour of the human brain. Like the brain, these multi-layered computer networks can gather information and build up an understanding of what objects look or sound like. This process involves feeding the neural network with plenty of data so it can learn concepts and ideas by itself.

Other breakthroughs in brain science are gradually paving the way to the construction of an artificial brain. Researchers in the University of Waterloo, Canada have created a computer model that performs tasks like a human brain, even to the extent of sometimes forgetting things.

Semantic Pointer Architecture Unified Network, or Spaun, is the latest version of a techno brain that tries to mimic the human brain’s behaviour by performing a series of tasks, all different from each other. Spaun can not only recognise numbers with its virtual eye and remember them, but can also manipulate a robotic arm to write them down.

Spaun’s “brain” is divided into two parts, loosely based on our cerebral cortex and basal ganglia. Its simulated 2.5 million neurons (the human brain has 100 billion) are designed to mimic how researchers think those two parts of the brain interact. For instance, its “eye” sees a series of numbers. The artificial neurons take that visual data and route it into the cortex where Spaun uses it to perform various tasks such as counting, copying the figures, or even solving number puzzles.

Looking into the future and assuming that AI research advances sufficiently for mankind to reach the technological singularity, might we one day co-exist with artificial superintelligence in a melding of human consciousness and machine-based intelligence?

In a case of science-fiction becoming fact, maybe we will be able to upload our consciousness into computers and live inside them as software, forever, virtually. While notions such as this may sound far-fetched now, what is true is that they reflect the innate human instinct for survival and desire to overcome our genetic imperfections, physical limitations, and finite lifespan, among other constraints.

A major milestone needed for the advancement of AI is the creation of ‘strong’ AI or artificial general intelligence that possesses the mental capabilities and functions that mimic the human brain. Strong AI means that a computer can be programmed to actually be a human mind; to be intelligent in every sense of the word; and to have perceptions, beliefs and other cognitive states that are normally only attributed to humans. Current AI capabilities are considered ‘narrow’ AI as they are capable of only performing specific tasks well.

Strong AI would represent the ultimate successful outcome for AI research into already mentioned areas like the single algorithm and constructing an artificial brain, and pave the way to a technological singularity. We may finally receive the long-awaited answer to Turing’s question. 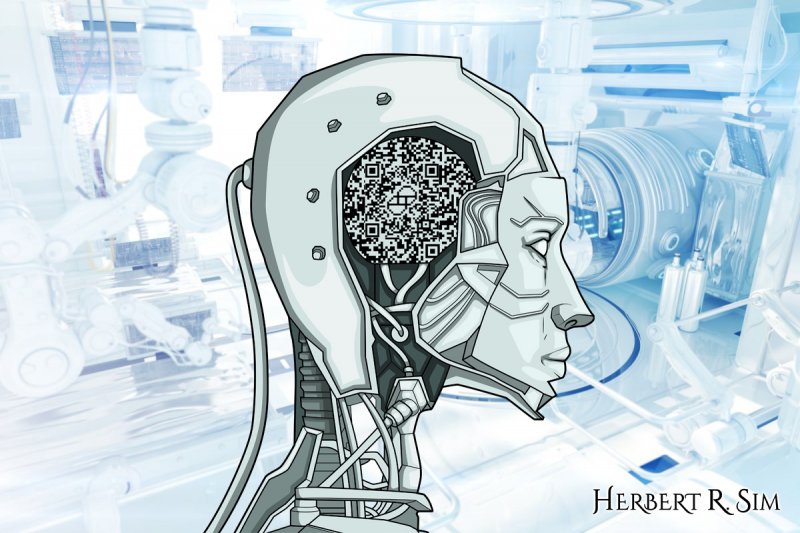 Here is the final illustration of the AI robot and brain. The brain of the AI is accentuated in black, and if you look closely enough, you would spot a QR code camouflaged in it.