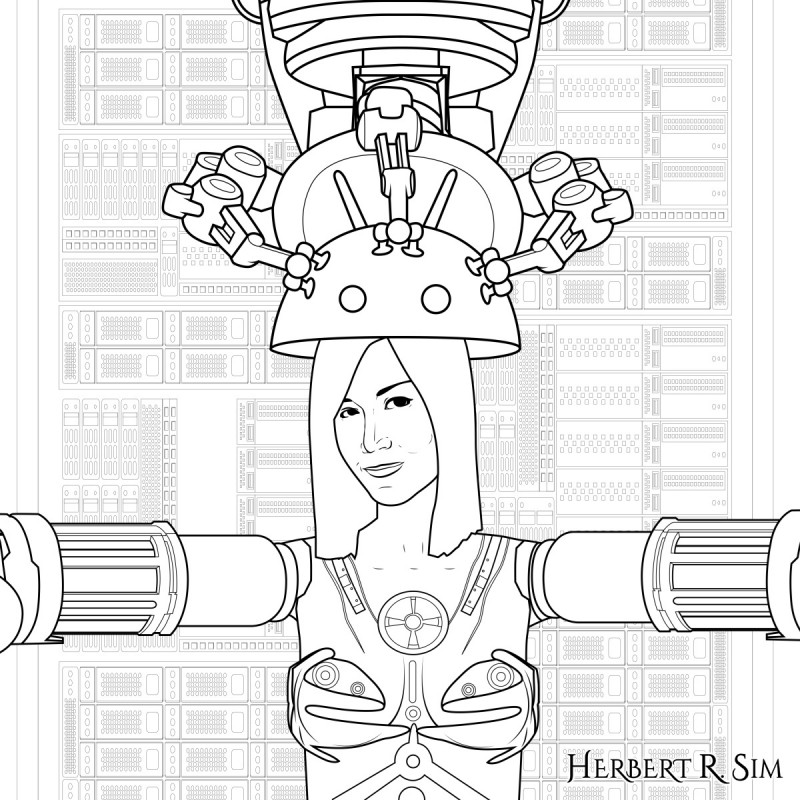 I am currently working in PR Agency, The Right Spin PR, in Singapore, who is the official public relations company servicing our client — HTC, one the leading android smartphone brand. And this illustration sketch was inspired and drawn to resemble the editor-in-chief of WardrobeTrendsFashion, Vanessa Emily.

To be clear, Artificial Intelligence (AI) is not a new phenomenon; its development has been around for several decades. AI research is generally deemed to have started in 1956 at the Dartmouth Summer Research Conference on Artificial Intelligence in the United States. Researchers at the time aspired to be able to create a powerful AI over the next few decades that could reason, learn, plan and communicate.

A complex and varied topic such as AI has myriad meanings. Among the many definitions about what AI means, one refers to the capacity of a computer to perform operations analogous to learning and decision making in humans. Some of the activities that computers or other devices with AI are capable of performing are: speech recognition, knowledge, reasoning, problem solving, perception, learning, planning, and the ability to manipulate and move objects.

AI comprises a range of technologies that can be applied on platforms such as the smartphone and computers. Three major emerging AI capabilities available on smartphones are worth highlighting.

Natural language processing (NLP) is a branch of AI that deals with analysing, understanding and generating the languages that humans use naturally in order to interface with computers in both written and spoken contexts. Human languages are used instead of computer languages. Speech recognition, which is becoming a common feature in smartphones, refers to technology that enables a device to recognise and understand spoken words by digitizing the sound spoken by humans and matching its pattern against stored databases.

Machine learning is an AI discipline geared towards the development of knowledge. It allows computers to handle new situations via a continual process of learning that entails analysis, self-training, observation and experience. Machine learning is shaping up to be a powerful tool in creating applications and machines that are quickly doing things its programmers had not originally planned for.

October 4th, 2011 was a major landmark in the world of AI and smartphones as it saw the debut of Siri, Apple’s trailblazing AI offering. Siri is the name of the virtual personal assistant that is part of Apple’s iOS operating system. It is a mobile digital assistant, exclusively available in Apple devices, which takes commands from the user through voice commands, interprets it, and then carries out the required tasks, all using the capabilities of AI.

Because Siri has access to all the built-in apps on the Apple smartphone, it can perform a variety of operations at the user’s command. Siri can carry out basic tasks such as making calls, setting alarms, noting reminders, performing mathematical calculations and changing phone settings. It can also perform more advanced tasks like making a reservation at a user’s favourite restaurant, giving the weather forecast, sending a birthday greeting to someone precisely at the stroke of midnight, giving directions to places, and creating music playlists.

For those wondering how Siri got its name, it is actually an acronym which stands for ‘Speech Interpretation and Recognition Interface’. The company behind Siri, which shares its name with the app, was founded in 2007 and spent its early years in the Stanford Research Institute where it was part of an AI project called CALO, or Cognitive Agent that Learns and Organizes. This project was funded by DARPA, or the US Defence Advanced Research Projects Agency, underlining the powerful strategic potential of AI. Siri was initially released as an app for iOS in February 2010, and was acquired by Apple two months later. It was then integrated into the iPhone 4S at its release in October 2011.

Siri has a conversational interface which draws on its NLP and voice recognition capabilities. A user’s request can be made in natural language, which Siri’s voice recognition technology then works to process. When a user says something to Siri, it collects the voice and converts it to a data file which is then sent to servers for processing. This is why Siri requires an internet connection to function.

Although challenging, Siri works to account for users’ different accents, dialects, small nuances of voices and even speech difficulties. This is where machine learning capabilities come in to help Siri become more adept at understanding the growing number of users from different parts of the world.

Not to be outdone are Android smartphones – the other major platform in the world of smartphones – which is also leveraging on AI technologies becoming available in a range of apps.

The Vlingo Virtual Assistant, like Siri, has voice recognition technology that allows users to send texts and emails, voice dial, find restaurants and businesses, buy movie tickets, and even update social media. Speaktoit Assistant is another app that is similar to Siri or Vlingo, but instead of boring text and voice interfaces, the user gets to interact with an animated avatar whose appearance can even be customised.

There is also the Sonalight Text by Voice, which is a more specialised app that enables users to draft and send SMS texts just by using the voice. It also reads back SMSes that arrive. Sonalight pitches itself as a safe driving-friendly app as it can be operated without having to take one’s hands off the wheel.

Although apps with AI capabilities on the Android platform are similar to Apple’s Siri, a major difference taking shape with Android is the wider range of AI-powered apps available to users. This is likely due to the more diversified nature of the development of the Android platform, which was launched in 2007 by the Open Handset Alliance – an alliance of prominent companies that includes Google, HTC, Motorola, and Texas Instruments among others.

The diversified AI landscape on Android has enabled brands such as HTC, the Taiwanese smartphone maker, to ride the AI wave through phones such as the EVO and DROID Incredible which have proven commercially successful partly due to the AI-powered apps highlighted above.

Whether in smartphones, tablets or other devices, AI promises to be a major force in the digital era with a profound impact on our relationship with digital devices. AI looks set to be a major part of our lives, influencing how we live, work, play and interact with each other. And smartphone players such as Apple, Android and HTC look well-poised to drive AI to greater heights. 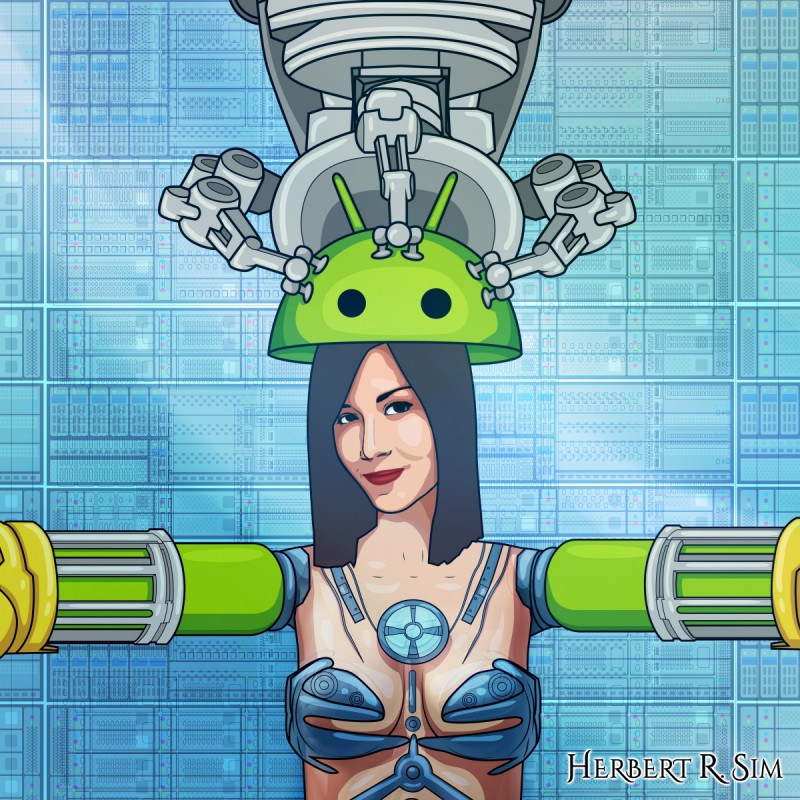 In this final illustration in full color, Vanessa Emily is revealed as an artificial intelligence (AI) cyborg underneath the green-colored armor of the Android Robot.