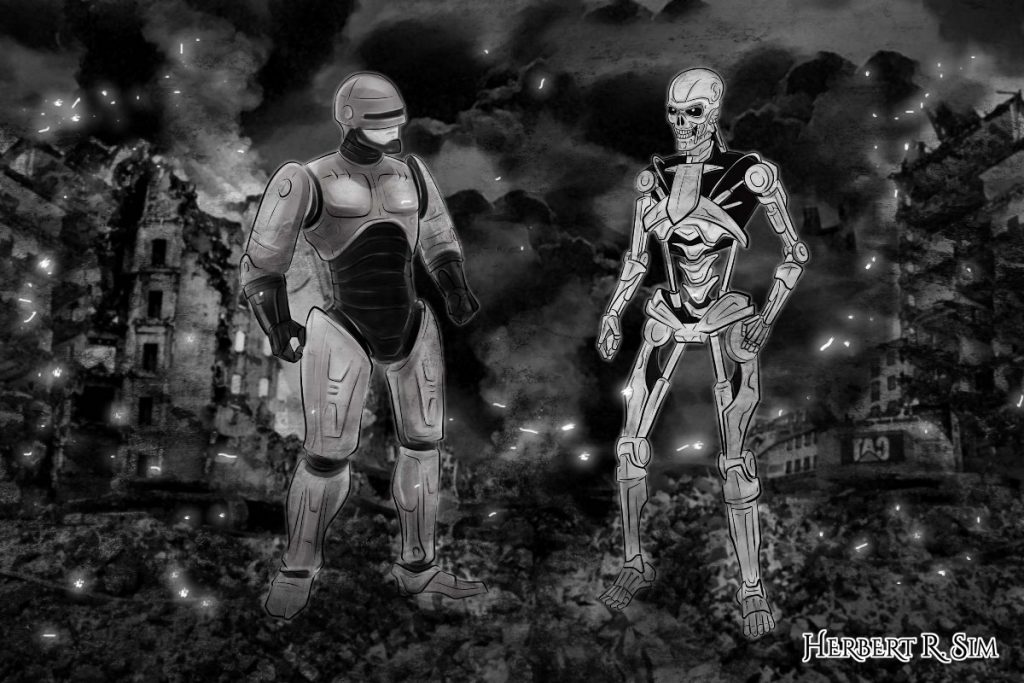 Above, my illustration of ROBOCOP versus Terminator endoskeleton T-800.

Change is the only constant when it comes to militaries and other security organisations being able to do their jobs more efficiently and effectively. Technological progress is an integral driver of that change. With the nascent rise of artificial intelligence (AI) – which refers to a system that perceives its environment and takes actions which maximizes its chances of success – weapons systems in the military sphere are starting to adopt ideas and capabilities from the AI field.

Lethal Autonomous Weapons Systems (LAWS), look to be part of the next wave through which militaries conduct operations in the future. LAWS can be defined as “weapons capable of accomplishing a mission with limited or no human intervention”. These systems, which can be robots or other air, land or sea-based platforms, are capable of “self-propulsion, independent processing of the environment, and independent response to the environment.”

Onboard computers interpret data collected from sensors to identify and target hostile forces with built-in weapons. LAWS may check with human controllers at remote sites for authorization to fire, and friendly forces may carry transponders that identify them as “friends”. Human operators are still part of the loop as LAWS can have different levels of human involvement in their operation, ranging from semi-autonomous to fully autonomous.

LAWS have the potential to be “faster, better, cheaper” systems of the future. Unmanned systems are likely to cost less than manned platforms as their designs are not constrained by the inclusion of life support systems. This makes available critical space and weight for a greater variety of systems with new capabilities.

The use of advanced computer processing in LAWS can reduce the time taken for decision-making. Autonomous targeting and fire control systems can also increase weapons accuracy. The operational deployment of LAWS also means lower risk to soldiers as unmanned systems can operate in hazardous environments, such as ones involving radiological, chemical, or biological agents, which are unsafe for humans.

However, as LAWS is a still-developing technology, they do pose a number of limitations. Autonomous optical systems may have difficulty in quickly and reliably discerning between hostile forces and neutral or friendly parties, or differentiating objects such as civilians, animals and vehicles.

Semi-autonomous systems, which still rely on some degree of human control, may be vulnerable to command and control failures due to communications signals being disrupted. And as complex systems with numerous processes and moving parts, there is always the chance of an autonomous robot, for instance, going haywire and firing indiscriminately.

Despite such limitations and risks, it is important to bear in mind that these are near- to far-future technologies that are still being developed; they are far from perfect. What matters at this stage is the safe development of such systems that ultimately help militaries achieve their objectives.

The US military has constantly been at the forefront of technological innovations. It’s Space and Naval Warfare System Command (SPAWAR) develops semi-autonomous armed robots for use in combat by the US military. According to Bart Everett, technical director for robotics at SPAWAR, they are not quite building Skynet, but some sophisticated robots are in development that may well be the future of LAWS.

A case in point is the MDARS-E (Mobile Detection Assessment and Response System – Exterior) robot – an armed, unmanned vehicle that can navigate complicated environments autonomously. It functions with the help of high-tech sensors and is controlled by a sophisticated software system. MDARS-E’s on-board weapons are under the strict control of their operators. But it is able to work cooperatively with soldiers, and identify and confront hostile targets in missions.

MDARS-E is intended to drive around urban and rural environments looking for hostile elements, with its findings reported in real-time to a guard station. Once the guard identifies an element as an intruder, MDARS-E aims its guns on the target and, in an ominous robotic voice, issues a warning. If given the command, the robot will first fire a warning shot at the target’s feet, and if ignored, it will shoot the target. Sounds like the makings of a real-life Robocop.

Another example of LAWS comes from the maker of the Roomba robotic vacuum cleaner, which rolled out a fast-moving, semi-autonomous bot capable of lethal operations – the iRobot Warrior X700. (sounds like something from Terminator, no?)

The Warrior, as it is known, is able to bear a 500-pound payload and carry 150 pounds with a robotic arm, useful in performing re-supply operations, or to carry ammo and water to soldiers who are pinned down.

When it comes to lethal operations, the Warrior is designed to perform perimeter security or building clearing. It is able to protect soldiers by firing weapons such as a machine gun or 40mm explosive round. One Warrior variant is fitted with an electronic firing system comprising four small barrels able to shoot as many as 16 rounds a second when fired together.

These robot-mounted weapons have a range of up to 800 meters. And unlike other armed robots which are entirely remote-controlled, the Warrior is being engineered with advanced software, giving it the ability to perform some battlefield functions autonomously.

Despite the possibilities that LAWS bring to the battlefield, they are very much a work-in-progress.

Before we jump ahead to lethal autonomous systems, the evolving relationship between humans and robot systems must be acknowledged. From a non-lethal perspective, robots have gone from mapping an area by themselves (full autonomy), to mapping and then leading a human through an area (semi-proximal autonomy), to working fully with a human partner (proximal autonomy).

The incorporation of lethal capabilities must be carried out similarly in a safe and prudent manner. If deployed extensively, LAWS could fundamentally change the way warfare is conducted.